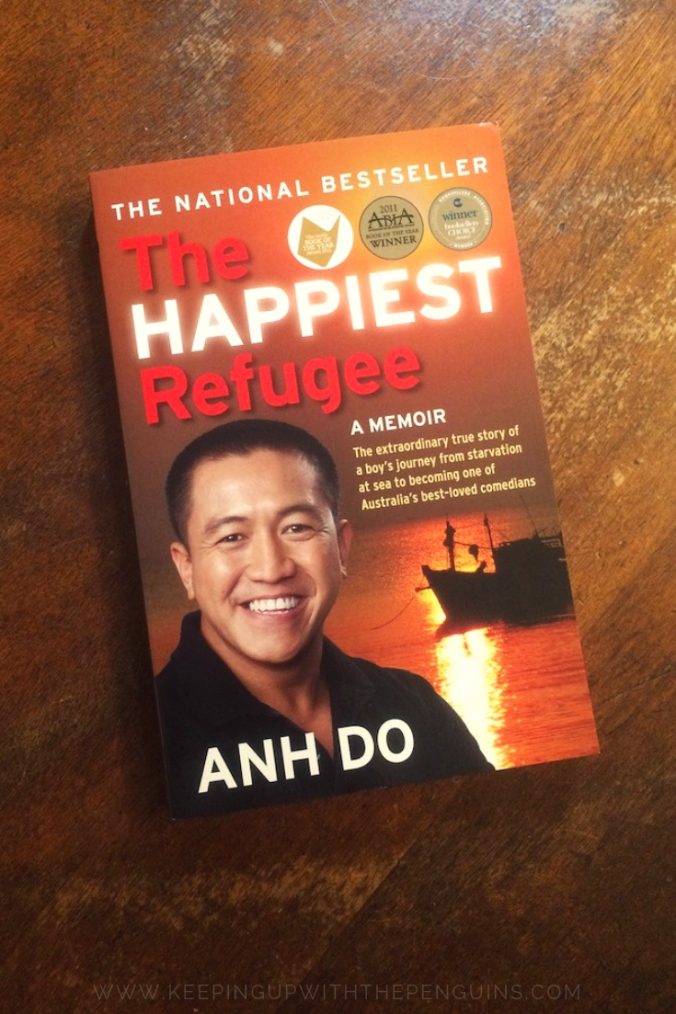 The Happiest Refugee – Anh Do

You’d be forgiven for picking The Happiest Refugee thinking you’re going to get a light-hearty folksy anecdote from one of Australia’s most cheerful comedians. Indeed, there are plenty of chuckles to be had, but Anh Do’s life hasn’t all been smooth sailing (that is the most awful attempt at a joke I’ve ever made, you’ll see why in a minute, but it’s my blog so I’m leaving it in). I grew up watching Do in televised comedy festival galas and on TV shows like Thank God You’re Here, but I had very little idea about his background before I read his book. So, strap in, folks: this is one hell of a story.

The blurb probably sums it up best:

“Anh Do nearly didn’t make it to Australia. His entire family came close to losing their lives as they escaped from war-torn Vietnam in an overcrowded boat. But nothing – not murderous pirates, nor the imminent threat of death by hunger, disease, or dehydration as they drifted for days – could quench their desire to make a better life in the country they had dreamed about.”

That’s right: Anh Do is one of those “boat people” our government has been trying to make us fear for the last decade or so. I’ll tell you right now that I want to shove a copy of this book into the hands of everyone who has ever purchased a “Fuck Off, We’re Full” sticker.

Do was born in Vietnam in 1977, and his family fled to Australia in 1980. The blurb neither over- nor under-sells the horror of their journey. They were attacked by two different bands of pirates, who stole their engines, their jewellery, and pretty much everything else worth taking. One oddly benevolent pirate in the second crew threw a gallon of water on board as they were leaving, which was all that saved the family from dehydration. They were eventually rescued by a German merchant ship.

Now, as Do tells it, his father was only twenty-fucking-five when he packed his entire family (his wife, sons, aunts, uncles, and cousins) onto that leaky boat and took them to sea. There were forty of them, all told, on that fishing boat, just nine and a half meters long and two meters wide. Do Senior captained it out to open water, fixing the back-up engine with a rubber thong and basically running the whole operation, all while he was three years younger than I am now – mind blowing!


Because this is real life, Do’s father – brave as he was in his youth – is not perfect, and Do is really frank about their relationship, including periods of (literally) violent antipathy. His honesty impressed me to no end; when it’s your job to make people laugh, it must be especially tough to tell them about the time you grabbed a knife from the kitchen, prepared to stab your drunken father who was threatening your terrified mother. Their rocky relationship, and the steps forwards and backwards across the course of Do’s life and career, is a central part of his story, and as heart-wrenching as it can be, it’s all told with his characteristic and eternal optimism.

Do’s message seems to be this: work your arse off, and smile, and everything will turn out okay. Powered by elbow-grease alone, he made it through school and university (Business/Law at UTS), forged a decent career as a comedian and actor, pivoted into art (he’s been twice-nominated for the Archibald Prize) and writing, and he’s now raising a happy family with his wonderful wife, a million miles away from the life of poverty and peril that surely awaited him in post-war Vietnam. “I’ve always found that if you apply yourself at the right time with the right intensity, you can accomplish just about anything,” he says on page 113.


The Happiest Refugee has won more awards than you can poke a stick at – including the 2011 Australian Book Of The Year. Like The White Mouse, it’s hardly a literary coup (he’s a comedian, not a creative writing grad), but it’s a cracking yarn nonetheless. It’s one to read when you need a little optimism in your life. I feel like I’ve just met Do in a bar, and had an incredible chat about his incredible life over a few beers. And I couldn’t help but notice it doesn’t have a single one-star review on Amazon! You can’t get higher praise than that!

My favourite Amazon reviews of The Happiest Refugee:

Stamps In My Book Passport