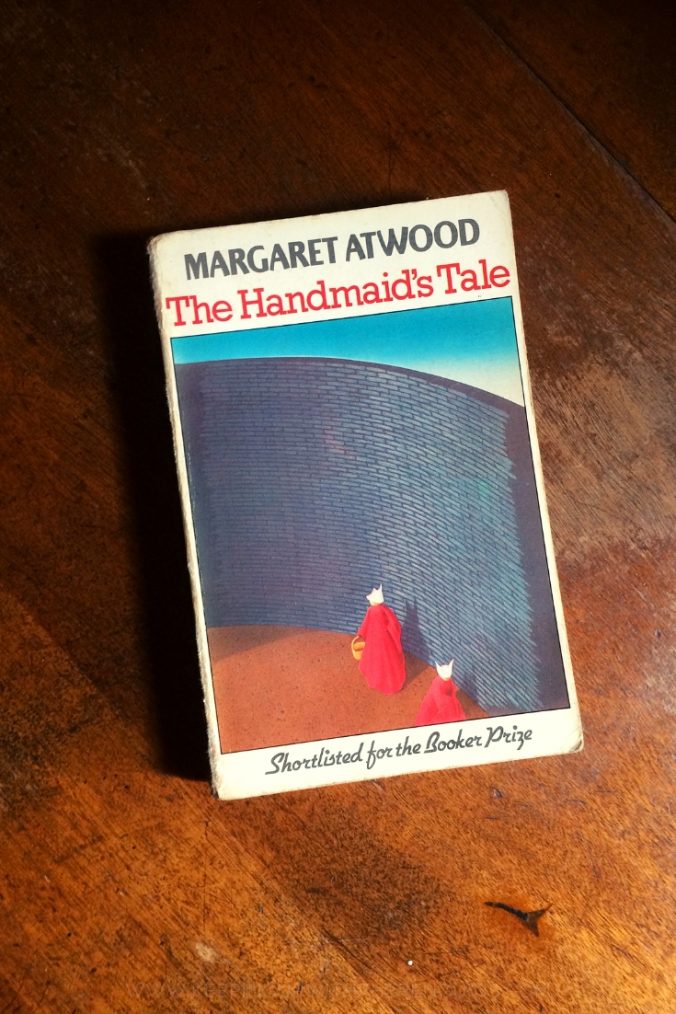 All my life, whenever The Handmaid’s Tale came up in conversation with someone I know well, they were always shocked to learn I hadn’t read it already. I’d absorbed enough about it through popular culture that I had a vague idea of what it was about, of course, but no more than that – somehow, I remained miraculously spoiler-free. I hadn’t even watched the HBO series! So, I sat down to this one with a clean slate, and an open mind.

The Handmaid’s Tale, by Margaret Atwood, was first published in 1985. It’s set in a near-future New England (an eerie echo of The Scarlet Letter, perhaps?), re-named Gilead, where a new theological totalitarian regime has overthrown the U.S. government as we would know it in the “real” world (yes, yes, I know, the “real” world now resembles Gilead more than it ever has before, but that point has been made so often that it just feels hacky to even bring it up).

The story follows Offred, a “handmaid” in the house of Fred (get it?), the master whom she is bound to serve in this religious patriarchal hellscape. Basically, widespread infertility has rocked society so hard that they’ve rounded up all the fertile women and started using them as breeders in the households of wealthy elites. Offred is lucky enough to have functioning lady bits, so off she’s carted to Fred’s house, and his wife has to sit around and watch as Fred tries to stick one in her. Fun times!

And where the heck does Atwood even come up with twisted shit like this? The “real” world, of course (turns out I couldn’t help myself, sorry). She drew a lot from the Puritans (interesting-but-only-semi-related-fun-fact: Mary Webster, one of Atwood’s ancestors, was accused of witchcraft in Puritan New England, but survived her hanging), and other regimes in which women are subjugated on “religious” grounds. Basically, Atwood is challenging us to look at what would happen if casually misogynistic attitudes (prevalent in the ’80s, at the time of writing, and sadly still today) were taken to their logical extremes. Atwood has famously said that nothing in her speculative fictional world of Gilead hasn’t already happened at some point in human history. So, that’s a cheery thought!


Of course, the system extends far beyond a simple fertile/non-fertile binary: there’s a (conveniently colour-coded) hierarchy to assign women their status and roles. The Handmaids (red) are in charge of baby-making, the Aunts (brown) are in charge of “educating”, the Marthas (green) are domestic servants, the Wives (blue) are married to the men in charge and pretty much just swan around trying to hide their drinking problems and brunching, and the Econowives (stripes of every colour) are expected to do the lot for lower-status husbands. The hierarchy for men is less clear, but it seems to boil down to Commanders (like Fred) who run things, and their soldiers/lackeys. The only ones free from expectation (as much as one can in a totalitarian regime) are the Unwomen and the Jezebels, who have committed “crimes against their gender” so egregious that they’re not accepted in polite society. Good on ’em!

The history and structure of Gilead is relayed entirely from Offred’s perspective, as well as her own personal story – thus, The Handmaid’s Tale (and things from here on are going to get spoilery, so exit your browser now or forever hold your peace). She points out that dividing women in this way, so visibly and without recourse, stops them from empathising with each other (which, in turn, prevents them from banding together in resistance). Still, her exposition, her explanation of how all of this came to be, is gradual – sometimes frustratingly so. I get that Atwood didn’t want to overwhelm the reader with all the details of her world at once, but in some ways, I kind of wanted her to! Just give me the lay of the land and let’s get on with things! (And that’s why jumpy timelines and I don’t normally get along…)

And jumpy it is: in between drip-feeding us fascinating insights into how Gilead works, Offred tells us the story of both her past and her present. In her past, as the Gilead takeover was happening, she smelled blood in the water and tried to flee to Canada with her husband and child (they’d been adulterous, had a kid out of wedlock, Offred wanted to be able to do stuff like make her own money and read books – all the shit theological totalitarians hate). Ultimately, she was caught and separated from her family. Serving as a Handmaid was her punishment (or “reward”, depending how you look at it – she was “saved” by her functioning ovaries from being exiled to “the colonies”).


In Offred’s present, her life revolves around doing the daily grocery shop (because stretching one’s legs is good for the womb, somehow), and The Ceremony every time she ovulates (i.e., a rape ritual, intended to impregnate her). That is, until her Commander goes off script, and asks to start seeing her on the side. They’re not supposed to have any interaction outside of The Ceremony (she’s not a concubine, after all, she’s a Handmaid), but he’s all keen to get together and play Scrabble, and he gives her lotion and booze as bribes to keep her quiet about his indiscretions. Offred later learns that he tried a similar carry-on with his former Handmaid, and she killed herself when his wife found out.

But Fred’s wife is none the wiser, for the moment, and even decides she likes Offred enough to make her own illicit overtures: she suggests that Offred try to get their driver, Nick, to impregnate her (seeing as Fred’s clearly struggling to get the job done). Offred and Nick develop a relationship, getting it on every chance they get, and eventually start sharing secrets.

Atwood keeps on world-building, right up until the final chapters – I know I complained about that just a minute ago, but I’ve got to give it to her, the writing craft is absolutely superb. It turns out, there is a resistance, and Nick might be able to get Offred out, smuggle her to safety. But can she trust him? He could be a spy – an Eye, as they’re called in Gilead – and it could all be an elaborate ruse to catch Offred out. In the end, Nick shows up with a car full of Eyes, and tells her to let them “arrest” her because they’re actually undercover members of the resistance. She figures she doesn’t have much choice, she’s bundled into the car, and away she goes. Her fate, in the reader’s mind, was left completely uncertain (until the sequel was released last year, anyway).


The real master-stroke, the knock-out punch, is the epilogue that reveals the “truth” of the story’s frame. It turns out Offred’s narrative was recorded onto a series of cassette tapes, and the transcript is being presented at a conference for academics that study “the Gilead period” of history. Atwood implies that Gilead collapsed, at some point, and a more equal society then emerged, with restored rights for women and freedom of religion. The academics, like the reader, have no idea what happened to Offred in the end, and these tapes are one of the few records (or “testaments”, eh?) they have on what went on in those dark days.

The Handmaid’s Tale is a vital book – even if the jumpy timeline(s) and drip-feed world-building annoyed me, I absolutely acknowledge its brilliance and ongoing relevance, on par with Nineteen Eighty-Four. It won the Arthur C Clarke Award, the Commonwealth Literature Prize, and it was shortlisted for the Booker Prize in the year of its release. Plus, it’s been challenged and banned too many times to count (always a good sign!), because it’s too sexually explicit, it has “adult themes”, it presents a negative view of religion, yadda yadda yadda…

That’s not to say it’s beyond reproach, of course (literature, no matter how good, never is). One particularly interesting critique I read, from Ana Cottle, positioned The Handmaid’s Tale as a manifestation of white feminism. Not only did Atwood barely acknowledge the absence of women of colour in her story (thankfully rectified somewhat by their inclusion in the HBO adaptation), she also borrowed heavily from the lived experience of oppressed women of colour (Cottle specifically mentioned African-American women, but I think her critique is applicable more broadly) and slapped it on women of relative privilege. To loosely paraphrase, the reason we find The Handmaid’s Tale so confronting is that the abuses perpetrated against women of colour are suddenly perpetrated against white women, and that blows our tiny minds. It would probably take a PhD thesis to fully explore this idea and do it justice, but I still thought it worth mentioning.

In the end, I totally understood why all my friends were so shocked I’d never read The Handmaid’s Tale. It was so far up my alley, I almost laughed when I finished it. I’m glad to have read it now, and hope to do so again – it seems like the kind of book that would benefit from many re-reads, spaced out over time. As the world changes, and the reader changes, the story it tells will change too, I’m sure.


My favourite Amazon reviews of The Handmaid’s Tale: