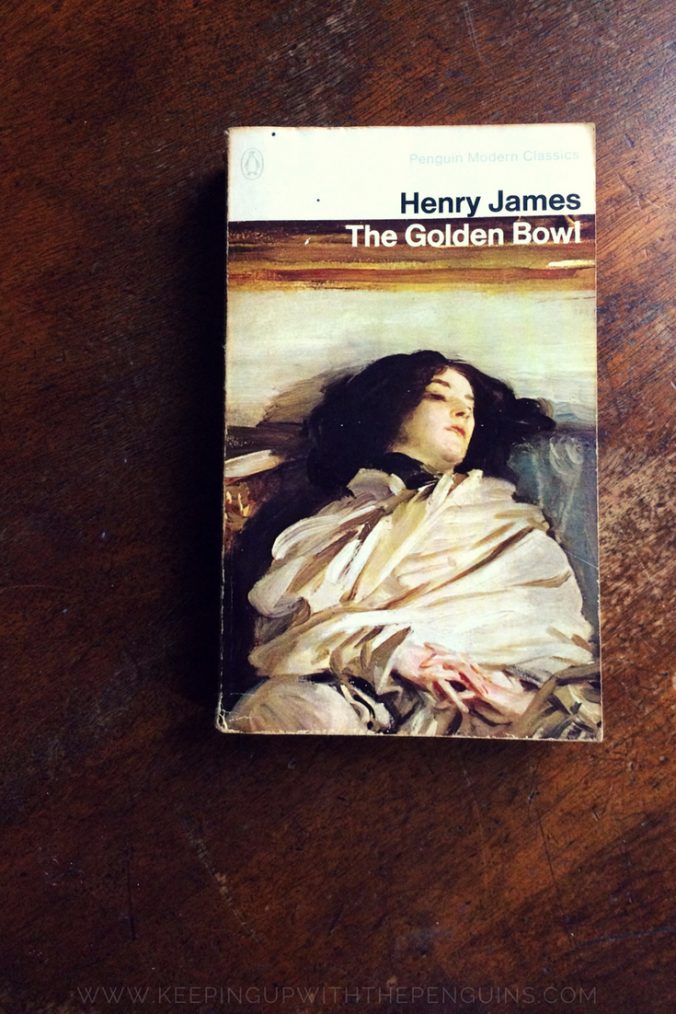 This is the first time I’ve reviewed two books by the same author back-to-back. I had high hopes for The Golden Bowl, as it came very highly recommended by a friend. These hopes were tempered somewhat by reading The Turn of The Screw last week, but not completely lost. After all, Graham Greene once said that The Golden Bowl was one of James’s “three poetic masterpieces”, so it couldn’t be that bad, right? Well, I only found out later that my friend was a fan of Henry James in general but had never actually read The Golden Bowl in particular, and thus began my nightmare…

This edition of The Golden Bowl came with an author’s preface written by James himself. By the end of the first page, I could tell that James liked to use 20 words (and as many commas) to say something that could be said in five. Red flag number one! Reading the preface was such torture that I ended up skipping half of it altogether, and jumped straight into the story (which I never do!). I’d hoped the story would be an improvement but (spoiler alert) NOPE! I literally came to dread even picking up The Golden Bowl before I’d reached the end of the first chapter.

If I’m being honest, plot-wise, it wasn’t that bad. It kicks off with an impoverished Italian prince (Amerigo) all set to marry Maggie Verver (the daughter of a wealthy American). On the eve of the wedding, his former lover (Charlotte) shows up out of the blue. He never married Charlotte because they were both too poor, but she was in effect “the one who got away”. He goes ahead and marries Maggie, but Charlotte just kind of hangs around.

A couple years later, Maggie becomes increasingly worried about her lonely old dad. She sets him up with her friend Charlotte (of all people), figuring it would get them both out of her hair. Papa Verver and Charlotte hit it off and get hitched, but he and Maggie remain very close – often leaving Charlotte and the Prince to their own devices…

This is where the symbol/plot device of “the golden bowl” comes in. See, the Prince had gone shopping with Charlotte prior to his wedding, looking for a wedding gift for Maggie. They came up with bupkis, but while they were looking they shared A Moment over a golden bowl in a random shop in the city. Years later, Maggie enters that very same shop and buys that very same golden bowl (which doesn’t say much for their stock turnover). The shopkeeper follows her home, claiming that he “accidentally overcharged” her for it and wants to give her the change (this is laughably contrived, but it’s not even the most unbelievable part). While he’s in Maggie’s house, he spots a photo of Charlotte and the Prince. He miraculously remembers that he saw them together in his store years ago, and suggests to Maggie that they’re having an affair, before he disappears into the night. That’s how Maggie twigs what’s going on. Yeah, right!

Anyway, setting that stretch of logic aside, Maggie goes and confronts her husband (and he breaks down, confessing straight away, simp). She is mortified by the affair, and insists that no one should know that she knows. She deftly arranges a pretense under which her father and Charlotte are to return to America together, leaving Maggie and the Prince to salvage the smouldering remains of their dumpster-fire marriage. Sure enough, as soon as Charlotte is out of sight, the Prince goes back to whispering sweet nothings in Maggie’s ear, and promising her that he only has eyes for her. Pffft!

Just like in The Turn of the Screw (James found a formula that worked and stuck to it!), it seems like a simple enough plot. It’s certainly not as complex as some of the others I’ve encountered in Keeping Up With The Penguins. But, damn! It took me for-fucking-ever to read The Golden Bowl. James went out of his way to crack a nut with the mother of all sledgehammers.

I ended up having to look up chapter summaries of The Golden Bowl online, to recap what I had just read and make sure I was following what was happening. In fact, I had to use almost every trick in my how-to-finish-a-book-you-hate arsenal. Don’t get me wrong, I completely understand the allure of a unique and complex style, but James’s was literally an impediment to my reading. I didn’t think I could possibly find a book more difficult to read than Mrs Dalloway, but here we are.

To say that James’s writing is dense would be the understatement of the century. His supporters argue that the writing is “beautiful”, that James captures the stresses of modern marriage and the “circuitous methods” one employs to overcome them (fancy language for fucking around, it seems), but it’s all a long-winded way of saying that James wrote a bloated thesis on how to stand by your man. I mean, I get that he was trying to pit the adulterers (the Prince and Charlotte) against the self-involved narcissists (Maggie and Mr Verver), but should it really be that hard to communicate the notion that it takes two to tango?

The Golden Bowl ended up on my reading list because it was ranked by The Guardian as one of the top 100 greatest books written in English. I say: boo to that! It bored and frustrated me in previously unimaginable ways. I think that James and I need to take some time apart… forever sounds good to me. I recommend reading The Golden Bowl if you’re participating in a competition to find the book with the most commas and/or run-on sentences. That’s about all it has to offer, as far as I can see.

My favourite Amazon reviews of The Golden Bowl:

Learn from my mistake: book recommendations from friends aren’t always the gold you’d hope they’d be! Check out the five mistakes you probably make when you’re picking your next read here.

The Best TED Talks on Books and Reading

5 Mistakes You Make When Picking Your Next Read