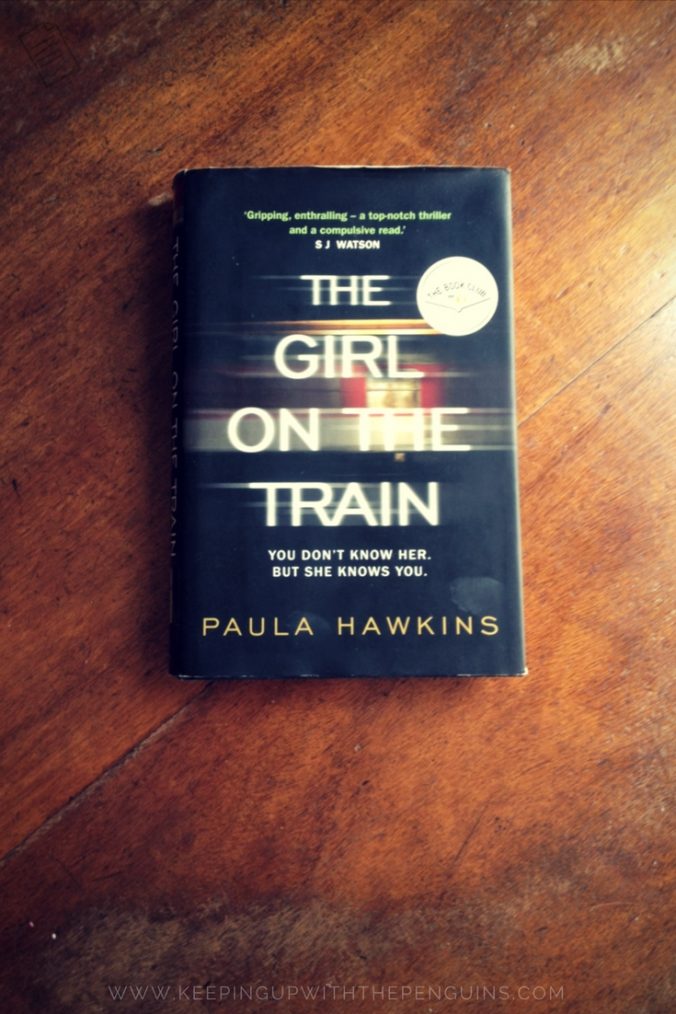 The Girl On The Train – Paula Hawkins

I picked up a copy of Paula Hawkins’ commercial breakthrough novel, The Girl On The Train, in a poky little Tel Aviv bookstore (of all places!). I was on my honeymoon, and I’d been searching desperately for a public bathroom. I stumbled upon this little gem instead, and paid the grand sum of 18 shekels, which converted to about $7, I think. (Reader, I found a bathroom shortly afterwards, never fear.)

The Girl On The Train was released in 2015, and debuted at #1 on the New York Times Fiction Best Seller list. It went on to hit a bunch of similar success benchmarks over the next few years, not the least of which was an edition run with those five magic words printed on the front cover: “Now A Major Motion Picture”. Of course, I haven’t seen the film, but conventional wisdom suggests that reading the book first is always the best idea anyway.

Even though there is only one girl on the train, this one is told from the perspective of three different narrators. Hawkins flicks back and forth between their perspectives, each providing different pieces of the puzzle. It was a nice change – refreshing even, reading the stories of fictional women that were actually written by a woman. You forget how important diversity is until you find yourself reading through a list of books written almost exclusively by old white guys.

Don’t get me wrong: The Girl On The Train is hardly on the front-foot when it comes to feminist thought. The title is the first clue (referring to grown women as “girls” in titles is one of my pet peeves), but I also took personal issue with the fact that the only reason given for the titular girl’s spiral into alcoholism was her apparent infertility *eye roll*. Chalk that up as another example of a female character’s only depth being her distress over the status of her womb.

I know I’m being snarky, but I can’t help it. The girl (Rachel is her name, by the way) wouldn’t have found herself in this mess if she weren’t so concerned about being barren. To cope with her depression (why else would she be depressed? her womb is all she cares about!), she self-medicates with alcohol, and stares creepily from the window of a moving train into the backyards of her ex, his new baby-mumma, and their neighbours. She lives out this routine of black-outs and creepy staring, every day… until one day she witnesses something kind of dodgy, and then the action kicks off.

Infertility and alcoholism aren’t Rachel’s only issues, if I’m being totally fair. Hawkins’ publishers probably should have included a major content warning on the cover of The Girl On The Train. I can’t imagine there’s many women out there who aren’t nursing some sore spots on domestic violence, gaslighting, abortion, addiction, mental health… Thematically, it’s a really heavy read. I managed to chew through it fairly quickly, but I was in a good place mentally at the time. I’d imagine reading this one when you’re already feeling dark is a one-way ticket to the bottom of a bottle of tequila.

The Girl On The Train is scary in parts, I guess. There are show-downs and confrontations and dark alleyways to get your heart racing. Plus, every character could be the “bad guy”; they’re all fucked up in profoundly disturbing ways, and yet they are all recognisable. Any one of them could be your friend or your partner or your neighbour or your family, which is really the scariest part of all.

The whole way through, you need to bear in mind that your experience as a reader is filtered through the (very subjective) lens of an incredibly unreliable narrator. You’ve got to keep a close eye on the dates, too – even within chapters, the stories aren’t told chronologically. It’s very cleverly (deliberately) done to disorient the reader, but never too much, and it’s probably the most impressive part of the book.

My tl;dr summary of The Girl On The Train would be this: barren drunk stalker “girl” witnesses what could be a clue to what could be a crime, and you’ve got to swim through some very choppy waters to get yourself back on solid ground after that. I would only recommend this one if you’re in the mood for an easy read with heavy content. If you’re a thriller aficionado you might find it cliche, and if you’re in a dark place it might trigger some stuff for you: you’ve been warned.

My favourite Amazon reviews of The Girl On The Train:

Do You Use Your Local Library?