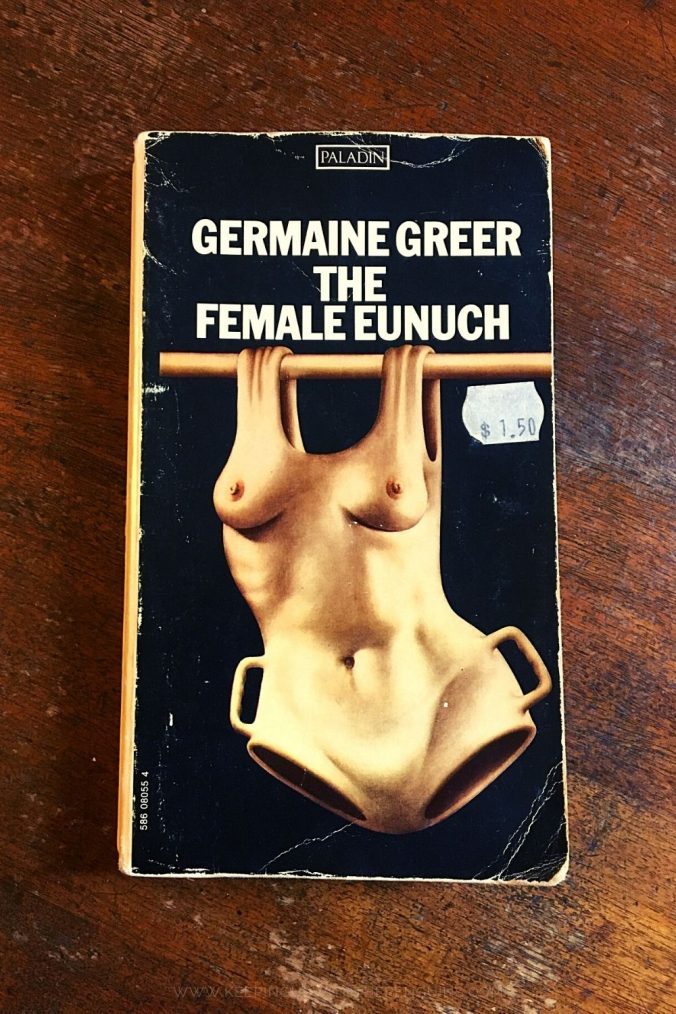 I always hated being told to “respect my elders”. I’m sure the kids of today feel the same (and my view hasn’t changed now that I’m old enough to say things like “the kids of today”). In my lifetime, Germaine Greer has said (and doubled-down on) a lot of really shitty things, and I could never find it within myself to revere her the way that older feminists seemed to do. Still, lately I got to thinking that it’s only fair that I actually read The Female Eunuch, Greer’s magnum opus, for myself. I worked very hard to go into it with a genuinely open mind, as I hope others would try to do when reading books that challenge their own views. But, as you’ll see… it wasn’t easy.

(And, just a heads up, I’m probably going to get pretty nerdy as I dissect this one, apologies in advance. Feel free to scroll down to the end if you just want a tl;dr summary.)

In October 1970, Janis Joplin died of an overdose. Nixon struggled to find support for a proposal to end the Vietnam War. Fiji became an independent nation. The West Gate Bridge collapsed, killing thirty five people. That was the context into which The Female Eunuch was first published, fifty years ago. Greer had already made a name for herself as a vocal feminist with an academic bent, and this book cemented that reputation.

In the introduction – in fact, in the very first line – she openly declares that she seeks to subvert expectations and draw fire from all quarters. “If [this book] is not ridiculed or reviled,” she says on page 22, “it will have failed of its intention,”. Littered throughout The Female Eunuch are laughably inflammatory statements, with little apparent purpose other than to horrify and outrage. For instance, on page 51, she suggests: “If you think you are emancipated, you might consider the idea of tasting your menstrual blood – if it makes you sick, you’ve a long way to go, baby,”. No, thank you. Not even if Greer were elected the Holy Ruler Of The World and declared that to be the only litmus test for feminism.

She also uses the introduction to The Female Eunuch to bemoan the “old guard” of the suffragettes. She subsequently nominates herself and her book to be the cusp of the “second feminist wave”. (I must admit, I experienced a certain delicious schadenfreude in knowing that Greer herself is now considered the “old guard”, and contemporary feminists bemoan her in much the same way.) Having set the scene, Greer goes about trying to challenge all who had come before her (with the single exception of Mary Wollstonecraft, whom she quotes frequently and at length).

The Female Eunuch is a strange blend of angry rant and scholarly references, as though Greer couldn’t quite make up her mind who she was writing for or how she should write for them. She swings at “traditional” marriage and the “nuclear family” like a wrecking ball, claiming that they (and their related social structures) repress women sexually, rendering them eunuchs – thus, the title. I can get behind that idea, I suppose, and I can appreciate an attempt to shock and awe in order to get your point across… but the whole argument was so muddled, the approach so haphazard, that it was hard to make out what Greer was actually trying to say (let alone whether it was worth listening to).

She splits The Female Eunuch into four main sections: Body, Soul, Love, and Hate (ironically, riffing off binaries, the very thing she claims to rail against: “We will have to reject the polarity of definite terms, which are always artificial, and strive for the freedom to move within indefinite terms”, page 69).

I really, really wish she hadn’t opened with Body, the section focused entirely on her outdated (not to mention manifestly wrong) understanding of biology, sex, and gender. Reading it made keeping an open mind very, very difficult. Unfortunately – but, alas, unsurprisingly – when Greer refers to “women”, she’s speaking exclusively about cis-gender heterosexual women (which means, for expediency’s sake, in this review I’m going to have to do the same – doesn’t mean I have to like it). Occasionally, she mentions “lesbianism”, but seems skeptical that someone might be a lesbian for any reason other than a rejection of men, and she barely acknowledges the existence of trans and non-binary people at all.

The only notable exception was her use of the life of April – a trans woman – to make a point, using language so derogatory I literally shuddered. Greer’s ideas about April’s experience (described entirely in the abstract) were completely dehumanising. I suppose objectification and derision are only bad when it’s cis-men doing it to cis-women, in Greer’s view? Ugh. Even more unbelievably (if that were possible), she has the gall to call April “our sister”, claiming her for “the movement”. If not for my determination to persist in order to write this review, that would’ve been grounds for me to put The Female Eunuch down there and then. Ugh, to infinity.

And – I can’t help myself, I’ve just got to get this off my chest – I can’t believe that Greer’s views have, demonstrably, evolved so little since she wrote this book fifty fucking years ago. Think about how much you’ve learned in the last five years, or the last ten. Has she really managed to avoid becoming a better feminist – a better human – in all that time?

But, open mind, open mind, open mind, I kept telling myself… Further on, Greer likens women and women’s labour to that of the proletariat, and suggests women to exercise and claim power in an equivalent way. Women should go on “strike” in our domestic lives, the way that workers do, until conditions improve. Then, later, in what I came to realise was a typical Greer contradiction, she pooh-poohs the idea of sex strikes, the withdrawal or withholding of sex as a way of wielding power. Surely, for the women of whom she speaks (i.e., white, heterosexual, cis-gender, middle class women in English-speaking countries with Christian backgrounds), domestic labour is indivisible from sexual labour. They are one and the same. Why would she insert this dividing line between the two only when it comes to weapons for waging war against the patriarchy?

(That’s not rhetorical, I seriously don’t understand why. She claimed to be all about women reclaiming their sexuality and libido, but there are any number of ways to express and enjoy and connect with oneself sexually without engaging in sex with a male partner if that sex is rooted in oppression. I just… I don’t understand. If you do, please explain it to me in the comments!)

Take that, I suppose, as an example of all the ways in which The Female Eunuch is underdeveloped, poorly expressed, and narrow in scope. If I tried to detail every problem and fallacy, this review might end up being longer than the book. I found barely anything in there that I thought might be relevant to a person who didn’t look, live, and think like Greer, an incredible feat of tunnel vision, even for second-wave feminism. I was baffled by her apparent nostalgia for the Middle Ages and children raised by villages. I was angered by her victim-blaming (particularly in the final section, Hate, where she proposes that women who complain about their alcoholic husbands beating them are just making mountains out of molehills, and if they’d just stop nagging him about how much time he spent at the pub, he wouldn’t beat her – seriously, does that sound like feminism to you?). The only idea of Greer’s that made any kind of sense to me was that of harnessing women’s anger, of provoking them to challenge the limitations placed upon them.

Tl;dr? There are moments of insight, some evidence of forward thinking, but it’s a shame that those brief glimpses into brilliance are clouded by ideas that are dated at best, harmful and factually incorrect at worst. The impact of The Female Eunuch, the reason it has become a “classic” of feminist literature, can really only be found back in the 1970s, in the context of its initial release. The bar was very low, back then, even lower than it is now, so I can see how something like this might have been – as Greer hoped – the mirage of something revolutionary.

I just don’t think that The Female Eunuch has any value anymore. It’s not old enough, or well-written enough, to have the historical status and respect afforded to suffragette writing. It’s been too thoroughly debunked and overwritten to stand alongside later works of feminism. It’s out of date: scientifically, socially, and legally. It’s too deeply rooted in a colonial version of society to have any resonance or relevance in today’s world. I opened my mind so much my brain nearly fell out, and it didn’t do any good. The Female Eunuch did not change my opinion of Germaine Greer at all – and if you’re looking for a strong feminist voice to teach you something, my suggestion is keep on looking elsewhere.

My favourite Amazon reviews of The Female Eunuch:

Should You DNF A Book?