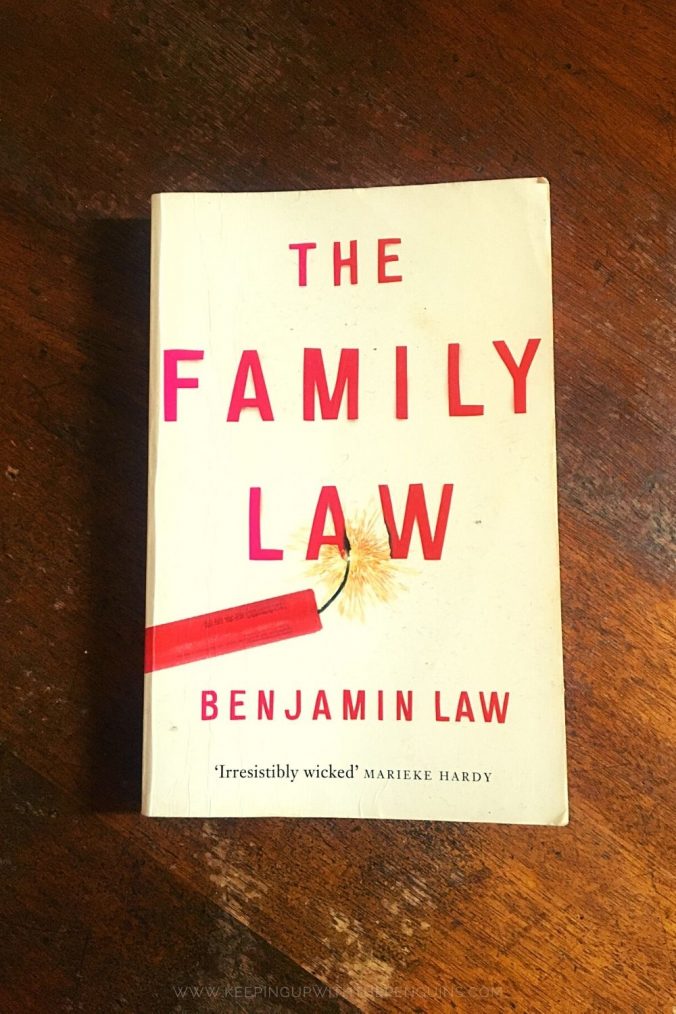 Working in a beloved local bookstore definitely has its perks (though not necessarily the ones you’d imagine – being able to read all day behind the desk is a pipe dream!). I’m a long-time fan of Benjamin Law, and one day earlier this year he came in to the store for a TV shoot. When he was done, my boss convinced me to (shyly) ask him to sign a copy of his memoir, The Family Law.

In case you’re not familiar, Law is an Australian author and journalist. He’s been working in television, radio, and theater for years – not to mention his strong Twitter presence. He was born in Queensland in 1982, to immigrant parents from Hong Kong. The Family Law is his memoir, about what it was like to grow up in an Asian-Australian family in the heartland of Pauline Hanson and her ilk.

It’s not a misery memoir, however – no sad laments, no tearful recollections of racially-motivated violence and oppression. This is a story of heart, humour, and hope. As per the blurb: “Meet the Law family – eccentric, endearing, and hard to resist. Your guide: Benjamin, the third of five children and a born humourist.”

The Family Law is presented as a series of vignettes and essays, in the style of David Sedaris. The through line is family connection, the love between siblings and parents, forged in the fire of being the only Asians on the mostly-white Sunshine Coast. The humour is self-deprecating, colourful, occasionally scatalogical, and uniquely Australian. Law plays to his strengths: the strangeness of being both an insider and an outsider at once, of feeling both at home and displaced.

Law is disarmingly honest about experiences that would make most of us squirm to recount (and probably automatically disqualify him from any future in politics): performing in black-face for a school production, family in-jokes about rape, an Islamophobic aunt, an extended family summarily deported after overstaying their tourist visas… He is admirably forthcoming and frank about these flies in the ointment (there’s probably something to that whole power-of-vulnerability thing) and it’s a handy signpost for the reader that he’s not here to make himself look good. He’s here to tell his family’s story.

“Every marriage starts with passive aggression, but couples soon realise that being passive requires effort. It’s easier to be openly hostile.”

I must say, even though each of the Laws get a look in, it’s the mother – Jenny – who steals every scene. She’s beyond brilliant. She tapes difficult English words (like “diarrhoea”) with their definition to the wall, so she can remember them. She likens giving birth to “squeezing a lemon out of your penis hole”. She is always, always borderline-inappropriate, in the most amiable and likeable way.

The Family Law is a memoir that will speak to all young Australians, not just those with an Asian background, not just those who are gay. Even though Law speaks to his racial and sexual identity, those facets aren’t defining in his story, and they’re certainly not essential to engaging with it. Basically, all you’ll need to enjoy The Family Law is some level of experience with family relationships, and a permissive sense of humour. Some familiarity with the Queensland vernacular and culture might also come in handy…

In 2010, Law created a six-part television comedy series of the same name, loosely based on the book. (No, I haven’t watched it yet – my to-watch list is now longer than my to-read list, if you can believe it – but I watched the trailer on YouTube, does that count?) It was the most-viewed program on SBS OnDemand throughout the series, and received huge critical acclaim here and overseas.

All in all, The Family Law is a charming, funny, and occasionally over-the-top series of recollections about feeling different and family life. Despite what they say about not meeting your heroes, I feel lucky to have done so, and Benjamin Law remains one of mine 🙂

There’s No Such Thing As An Easy Job – Kikuko Tsumura

The Best Books of 2020: My Reading Year In Review