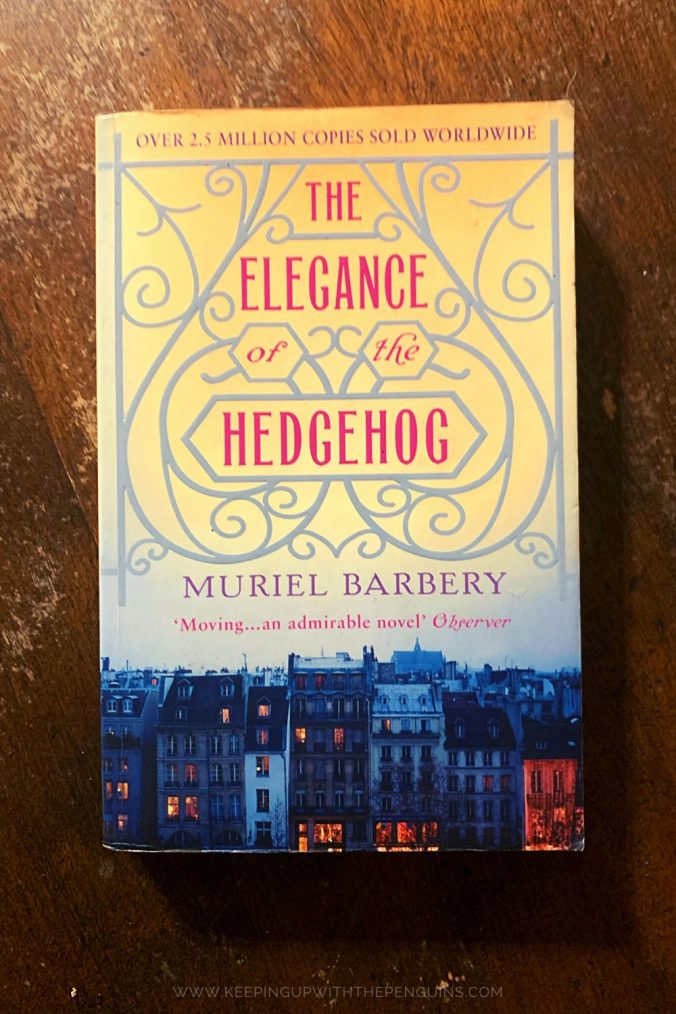 Muriel Barbery is not only a French novelist; she’s also a philosophy teacher. That explains why, just a few chapters into The Elegance Of The Hedgehog, we get a cynic’s lesson on phenomenology. And then another on class consciousness. And then another… Despite that (or because of it?), this quiet little novel – L’Élégance du hérisson in the original French, translated into English by Alison Anderson – has gone on to sell millions of copies worldwide.

The Elegance Of The Hedgehog is set in a bourgeois apartment block, and narrated by two of its residents: the building’s concierge who leads a secret life, and a troubled twelve-year-old who lives with her wealthy family on the fifth floor.

My name is Renée. I am fifty-four years old. For twenty-seven years I have been the concierge at number 7, Rue de Grenelle, a fine hôtel particular with a courtyard and private gardens.

The Elegance of The Hedgehog (Page 15)

Renée, the concierge, has gone to great lengths to conceal her true passions and pastimes from the residents of the building. She feels obligated to present herself as a “typical” concierge – fat, cantankerous, obsessed with television and cheap nutrient-deficient meals. But away from the prying eyes of her wealthy employers, she is an avid reader, an autodidact of literature and philosophy, who listens to opera and ponders phenomenology when she’s not collecting their mail or watering their plants.

Now, here’s where you need a content warning: there’s some pretty intense stuff with suicide in The Elegance Of The Hedgehog (and the rest of this review), so take care if you need to.

Paloma – the pre-teen who lives in the building – keeps two diaries, in which she details her “profound thoughts” and her observations on “the movements of the world”. She feels compelled to record these notes, as she plans to commit suicide on her thirteenth birthday. This is adolescent angst turned up to eleven. She’s seen nothing in her privileged, sheltered world to convince her that life isn’t completely meaningless – the “vacuousness of bourgeois existence” dismays her – and she doesn’t see any point in hanging around.

Paloma and Renée would be natural allies, except that they’ve never really spoken. It takes the arrival of a new resident, a cultured Japanese businessman who sees past Paloma’s age and Renée’s class confinement, to bring them together.

I’m not sure if it was just my mood at the time of reading, or the story itself, but The Elegance Of The Hedgehog was much more… smug than I’d anticipated from the blurb. And depressing, to boot. I thought this was going to be more of a feel-good story, a more philosophical A Man Called Ove maybe, but the characters were bitter and it left me feeling hollow. Perhaps there’s a certain French sensibility you need to have in order to find the fun, something I’m clearly without.

Barbery has said that she was “inspired by the idea of a reserved, cultured concierge who turned stereotypes on their head and at the same time created a compelling comic effect”. I can see how that could have happened in The Elegance Of The Hedgehog, but it fell short in execution.

Judging by the wild success of this novel, though, I might be alone in my disappointment. It stayed on the French best-seller lists for 102 weeks straight, and it has since been translated into over forty languages. The critics love it, the book clubs love it… but I don’t. The Elegance Of The Hedgehog was just okay. Don’t pick it up if you need a book to make your heart sing (but if you want one to help you with your Intro To Philosophy class, it might be a winner).

My favourite Amazon reviews of The Elegance Of The Hedgehog: