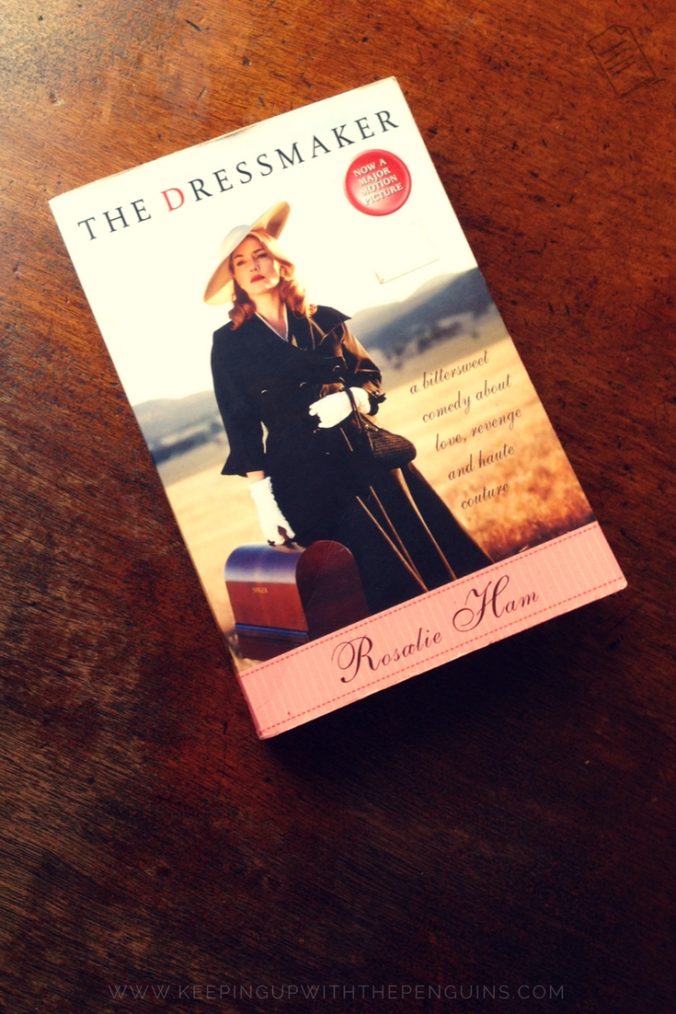 I’ve got to be honest: my Keeping Up With The Penguins reading list doesn’t feature as many Australian authors as I’d like. If you have a favourite, please do let me know so I can review it in future! In the meantime, I’ve picked up one of the ones that made it past the keeper: The Dressmaker by Rosalie Ham.

The Dressmaker is Ham’s debut novel – and yet it’s sold over 100,000 copies since publication in 2000. What’s more, Ham has said that she wrote The Dressmaker by “accident”, the product of participating in an RMIT creative writing course that she had never actually intended to join. She just showed up and started spitting fire, inspired by her mother’s life as a dressmaker in a small country town. Lifelong unpublished struggling writers everywhere are eating their hearts out…

The story is set in a (fictional) 1950s Australian town, where everyone has names like “Gertrude” and “Muriel”. The protagonist (Myrtle “Tilly” Dunnage) returns to take care of her ailing mother – who is more than a little cracked, it must be said. The locals shun her, but Tilly finds one friend in the local cop who likes wearing dresses (of course!). He’s the one who spots her talent for dressmaking. She also has a bit of a flirt now and then with a poor bloke who lives in a caravan up the road.

It takes Ham a couple hundred pages (full of veiled references and allusions) to reveal Tilly’s “dark secret”: the locals blame her for the death of a boy who was bullying her when they were children. That’s pretty heavy, I suppose, but then Ham goes and kills off Tilly’s love interest in the same breath, so it’s a fair wallop for the reader. What’s more, he has the most ridiculous death ever – he jumps into a silo (of all things), believing it to be filled with wheat, when it is actually filled with sorghum. The sorghum can’t support his weight, he sinks and suffocates. I’ve said it before and I’ll say it again: men are stupid.

Anyway, this second death really sets the locals off, and Tilly is forced to do dressmaking work for people from neighbouring towns. They’re the only ones who don’t care about her small-town scandal(s), and they actually pay her on time, which is very nice of them. This goes on until the community decides to put on a play, and they come to Tilly – hats in hands – asking her to make their costumes. She agrees to do so on the condition that they pay her in full, up-front (fair enough). They pay her using the funds they had saved to insure all the town buildings. Can you see where this is going?

Tilly makes the costumes, waits until the whole town has left to perform the play in the next town over… then she burns the whole damn place to the ground. Every single building. All personal effects – even the dresses belonging to her friend the cross-dressing cop – up in flames. Whoosh! The end.

The Dressmaker thus ends with pretty much what we’ve all dreamed of doing (“I’ll show them! I’ll come back when I’m rich and famous, I’ll have my revenge!”), only none of us are crazy enough to actually do it. The Sydney Morning Herald called it “a feral version of Sea Change”, which is pretty much spot on. Despite the dark ending, there are quite a few laugh out loud moments. The humour is deeply Australian, though, so I’m not sure how it would translate for an international audience.

Now, when you’re reading The Dressmaker, you can skip over a lot of the seamstress and fashion lingo, if you want. You won’t miss anything as long as you don’t care about being able to picture all her outfits with 100% accuracy. I didn’t bother looking any of it up, and I’m pretty sure I still got the gist. There are a lot of really obvious sewing and clothing similes (“the fog resting around the veranda moved like the frills on a skirt”), but for those an intimate knowledge of dressmaking isn’t required.

Side note: Ham starts to run out of those metaphors and similes about half way through, and has to start using clumsy imagery like this:

The Dressmaker (Emphasis Mine)

(This was, without parallel, my favourite line from the entire book.)

I took the liberty of watching the film trailer after I’d finished the book. Judging by that alone, the film is a lot more upbeat, and the Tilly character is much more expressive and likeable. Almost every review I’ve read of The Dressmaker says the same thing. So, although it was nice to read a homegrown book for once, I’d probably recommend you give it a pass and check out the movie instead.

My favourite Amazon reviews of The Dressmaker: