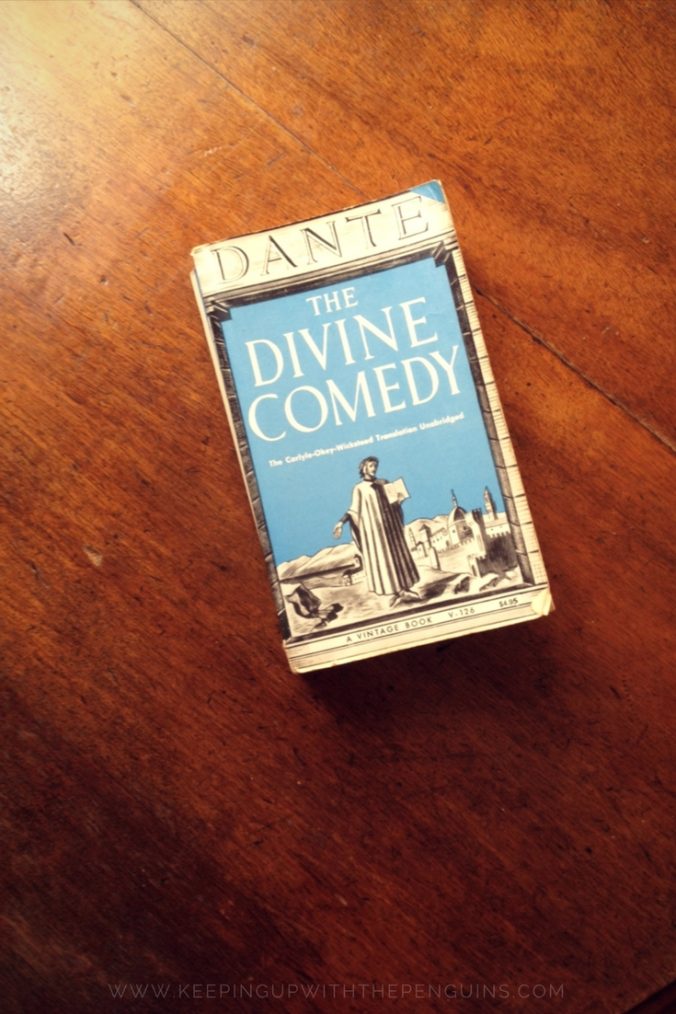 The Divine Comedy is special in the context of this project for a few reasons. It’s the oldest title on my Keeping Up With The Penguins reading list – Dante began writing it in 1308, and completed it in 1320. It’s also one of the very few not originally written in English. Dante was one of the first writers of the Middle Ages to produce work on a serious subject (the redemption of humanity and all that) in the low and vulgar Italian – normally, that kind of thing would be written in high-falootin’ Latin. And, finally, it’s the only poem (albeit a novel-length “narrative poem”) on the current List. So, this review is really one of a kind!

The Divine Comedy is a quasi-autobiographical poem (that reads like a book for the most part) about Dante’s “journey” through the three realms of the dead: Hell, Purgatory, Heaven. It makes sense, then, that it’s divided into three parts, each containing 33 cantos and an introduction (a canto is something like a chapter, I think – I don’t know much about poetry, don’t @ me).

This is the unabridged Carlyle-Okey-Wicksteed translation. Apparently, it’s perfect for readers who are completely unfamiliar with Italian (ding, ding, ding, that’s me!). I’d like to pretend that I chose this copy specifically for that reason, but really this is the only complete copy that I could find while trawling the secondhand bookstores. First-time readers should be prepared, regardless of what version you pick, that most of the reading is in the footnotes. Seriously, there’s one at the end of basically every line. You’ll need two bookmarks for this bad boy.

A fun fact: Dante originally called this work “The Comedy of Dante Alighieri, a Florentine by birth but not in character”. So, would have known right from the outset that he is both petty and hilarious: an excellent combination. It ended up getting shortened to just “The Comedy”, and then a bunch of fanboys added the “Divine” later.

Hell (“Inferno”) is – obviously – the best part. Each sin gets its own “circle”, and some particularly brutal form of poetic justice. My favourite one was the fortune tellers forced to walk around with their heads fixed on backwards. According to Dante, they’re unable to see what is ahead for all eternity, because that’s what they’d tried to do as mortals. Burn!

We went with the ten Demons: ah, hideous company! but, In Church with saints, and with guzzlers in the tavern.

I think, secretly, the reason that everyone loves Inferno so much is that traversing through Hell gives Dante ample opportunity to hang shit on everyone who pissed him off in real life. It’s proof that humans haven’t changed that much in the last 700 years, we’re all just petty sacks of shit. The (many) footnotes give helpful insights as to what Roberto Luigi or whoever did to annoy Dante so much that he stuck him in the third circle of Hell. Good on Dante, I say! If people wanted you to write nice things about them, they should have treated you better.

There were a lot of helpful diagrams included with this edition, and I referred back to them a lot. Given that I received no religious education outside of “say please and thank you and don’t talk with your mouth full”, it was hard for me to keep track of who went where in Hell, and why. The explanatory notes crapped on a lot about geography and astronomy though (“the position of this particular mountain relative to the position of the sun and the appearance of the constellation Aries at exactly 7PM blah blah blah…”); I guess it’s all very important to serious grown-up readers, but I let it fly right over my head. I’m here for a good time, not a geography lesson.

I knocked over Inferno pretty quickly, and it was great. I could see why people bang on about it so much, but… well, the rest of The Divine Comedy was a bit of a slog, to be honest. Things started to drag from the start of Purgatory (“Purgatorio”): there was less humour, less drama, and it was hard to stay awake.

My lack of religious education started to really trip me up around that point, too. It seems that a bunch of sinners end up on Purgatory Mountain as well (I thought that was what the Hell Pit was for?), and they’ve got to sort their shit out as they climb up towards the Garden of Eden. Purgatory is pretty much Hell with less burning and more praying. The Hell Pit didn’t sound like much fun, I suppose (too much hard labour and skin sloughing off and ice lakes and stuff – reconsider your need to travel), so if you can hang out with all the gluttonous perverts on Purgatory Mountain, that would probably be the better deal.

Anyway, Dante – having schlepped through all the circles of Hell, sidestepping the demons – works his way up Purgatory Mountain, where every man wanted to stop and chat and ask Dante to put them in his prayers. Great. It turns out, he did it all so he could get to the top (“Paradiso”) and hang out with Beatrice, the dead girl he used to have the hots for.

Only, when he gets there, she starts yelling at him and telling him he ain’t shit and he got up to too much sinning back in the mortal realm to ever be with a girl like her. Wtf?

I was very over The Divine Comedy by that point, and I had no time for Beatrice at all. I couldn’t work out why Dante was so into her. After she was done yelling, she just stood around smiling and coughing a lot. She was also a bit up herself; she literally said to him “don’t look at me, I’m so beautiful you’ll die, mate”. There were also no sexy bits.

All of this is to say I completely glazed over for most of Paradiso. It started to read like a medieval Wikipedia article, and the footnotes stretched on for pages at a time.

… the union of the divine and human natures in Christ is the point which Dante declares will be as clear to souls in bliss as ‘the initial truth which man believeth,’ or is as clear to Justinian as that ‘every contradiction is both false and true.’ Now ‘the initial truth which man believeth’ is not a generic term for axiomatic truth, but a specific reference to the ‘law of contradictories’ on which the whole system of Aristotelian logic is build up. It asserts that the propositions: This is so and this is not so cannot both be true in the same sense and at the same time. And it follows immediately from this fundamental axiom, that of the two propositions “all A’s are B’s” and “some A’s are B’s” or of the two propositions “no A’s are B’s” and “some A’s are B’s”, one must be true and the other false. They cannot both be true or both false in the same sense at the same time…

An actual extract from the footnotes of paradiso (The divine comedy)

I think the thrust of it all was that humans need to pipe down with all of their “thinking” and “reasoning” because God has this shit worked out already and we shouldn’t fuck with it. But humans are probably too dumb to understand that anyway, so… just carry on, I guess?

My tl;dr summary of The Divine Comedy overall is this: Inferno is hilarious and great, Purgatorio is just okay, Paradiso is a heap of shit. Read Inferno, and don’t bother with the rest (unless you need a sleep aid).

My favourite Amazon reviews of The Divine Comedy: