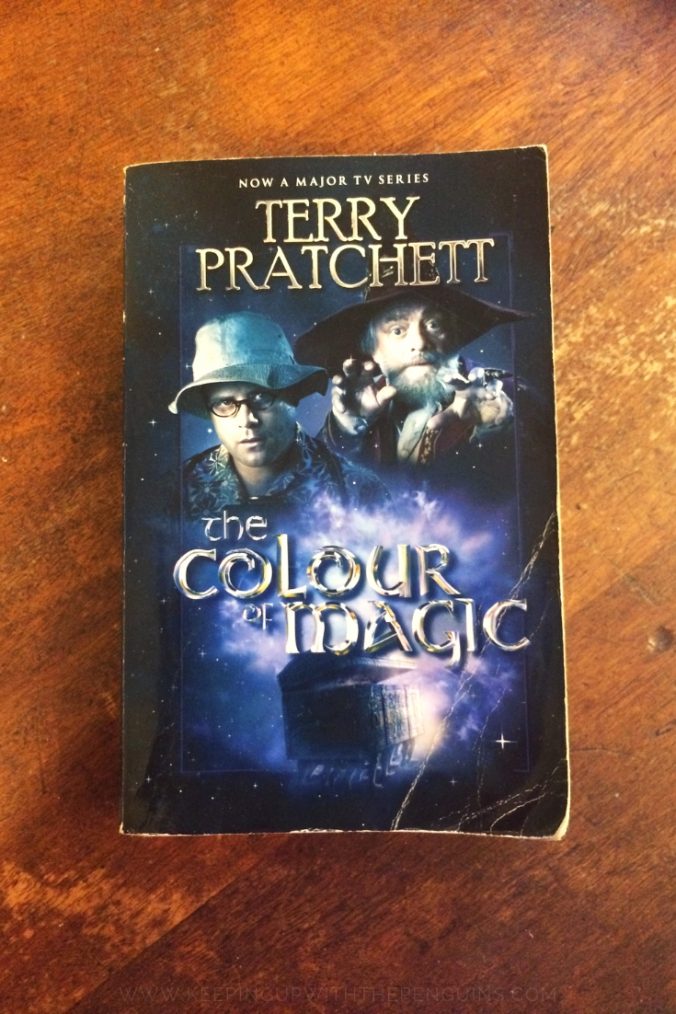 The Colour Of Magic – Terry Pratchett

I had a devil of a time finding a copy of The Colour Of Magic in my usual secondhand bookstore haunts. Most Terry Pratchett books are like hen’s teeth, even though he was pretty prolific (he wrote and contributed to over 70 books over the course of his life). It would seem that he’s, well, rather popular. I ended up finding this copy at a probably-illegal lonely market stall, run from the side of the road in Newtown. A hippie bloke was selling off what appeared to be his entire personal library, bless his cotton socks. I didn’t realise until I got home and opened the book that this edition also includes the sequel, The Light Fantastic – it doesn’t mention it on the cover at all. Weird, eh?

The Colour Of Magic is a comic fantasy novel, the first in Pratchett’s Discworld series, published in 1983. The first print run of the British edition produced just 506 copies; I can only imagine the panic at the printers when they realised just how many more they’d need, because it achieved instant popularity. All I knew about the book going in, though, was that a friend of mine from university loved Pratchett, and his shelves were stuffed with books from this series. We’ve since lost touch, but if he’s out there and he stumbles upon this little blog, I hope he’s happy I finally got around to picking up his favourite 😉

The blurb opens with the tagline: “The funniest and most unorthodox fantasy in this or any other galaxy”, which sounded like a very deliberate and unsubtle dig at Douglas Adams. Indeed, The Colour Of Magic read very much like fantasy’s answer to The Hitchhiker’s Guide To The Galaxy, and they’d probably make good companion reads if you’re into that kind of thing. This book, and the whole series after it, is set in a world that takes the form of a flat disc balanced on the backs of four elephants, who are in turn standing on the back of a giant turtle (the Great A’Tuin), floating through space. The inhabitants of the Discworld include wizards, dwarves, soldiers, beggars, vampires, witches, and all other manner of ghosties and ghoulies. The blurb hastened to reassure me, the reader, that the series can be read in any order, but it’s really best to start at the beginning, and enjoy them in the chronology that Pratchett originally intended. And so, I did…!


The Colour Of Magic follows the adventures of a failed wizard, and a wealthy (but rather naive) tourist, as they travel together through the Discworld. The story is split into “sections”, rather than chapters, so it reads almost like a group of short stories or novellas, as opposed to continuous novel-length prose. In the first, Rincewind (the wizard) is paid handsomely to guide Twoflower (the tourist) around the biggest city in the realm, his home of Ankh-Morpork. My first literal lol came when Rincewind described Twoflower thus:

“Let’s just say that if complete and utter chaos was lightning, he’d be the sort to stand on a hilltop in a thunderstorm wearing wet copper armour shouting ‘All Gods are bastards’.”

The Colour of Magic

Initially, Rincewind accepts payment for his services in advance and tries to do a runner, but the leader of Ankh-Morpork stops him. The leadership team fears that if Twoflower gets lost or dies on his watch, the resulting PR disaster would cause his rich and vengeful hometown to invade. Of course, Twoflower is promptly kidnapped by a gang of thieves, and, with his leader’s warnings ringing in his ears, Rincewind has to stage a rescue, so their adventures begin…

Oh, and Twoflower has with him The Luggage, an apparently-indestructible enchanted sentient(!) chest. It’s the R2-D2 to their Luke and C3PO, really.


An important note: my reluctance to read fantasy novels mostly stems from my fear of not being able to keep all the names of people and places straight (as I said in my review of A Game Of Thrones). There were a few murky moments in The Colour Of Magic, but on the whole I realise now, writing it, that my summary will sound a lot more confusing than the book itself. So, if you’re of the same mind, take heart – any confusion you’re currently feeling can be attributed right back to me, because Pratchett did a very good job of making everything clear. The only thing I would highlight as a potential issue is that the whole book reads like it’s on fast forward, and you need to be prepared to jump from place to place and crisis to crisis very quickly. In fact, The Colour Of Magic is pretty much one long series of quick accidents that rocket Twoflower and Rincewind around the Discworld, so that Pratchett can show off his universe as quickly as possible. As long as you’re prepared to keep pace, you’ll be just fine.

Anyway, back to the story: along the way, they’re joined by a large, violent, and mostly-monosyllabic barbarian named Hrun, who carries a magical sword. He doesn’t hang around long, though. They visit the upside-down mountain of Wyrmberg, home of the dragon riders, and Hrun catches the eye of the potential-heiress Liessa. He’s roped into marrying her so that she may ascend to the throne, and Rincewind and Twoflower carry on without him. They don’t even stick around for the bachelor party!

Before long, disaster strikes again: they’re taken to the edge of the Discworld by ocean currents (every Flat Earther’s worst nightmare!), and nearly topple over the edge. They’re caught by the Circumfence (definitely Pratchett’s cleverest pun in the whole book), a huge net that was installed to catch anything that washed off the Discworld. A sea troll finds them and takes them in, before promptly handing them over to the Krullians. This new group is seeking to discover the sex of the Great A’Tuin (the turtle on whose back the whole Discworld rests, remember?). They’re very concerned about the possibility of the Great A’Tuin running into another giant space turtle, naturally, so they want to assess what the reaction of the turtle might be based on its sex (if it’s a boy turtle and it runs into another boy turtle, for instance, they might fight, spelling certain doom for everyone in the Discworld).


The Krullians are planning to launch a two-person capsule over the edge of the disc, and they decide to offer Rincewind and Twoflower to the God of Fate in sacrifice, to ensure the voyage’s success. In the end, however, Twoflower ends up joining the mission in the capsule, and Rincewind escapes… only to fall right over the edge, anyway.

The story quite neatly segues into the beginning of The Light Fantastic, so they can be read as a single novel, but I didn’t continue on with it – I’ve had enough fun for the moment! Nonetheless, I can definitely appreciate how well The Colour Of Magic sets up the Discworld series; Pratchett left a lot of interesting threads dangling, and I can understand the reader’s desperation to tug at them a little and see what happens. The series reached thirty-two installments, and sold over 20 million copies around the world, leading it to become one of the most popular and celebrated series in English literature. But what’s weird is that most die-hard Pratchett fans insist that The Colour Of Magic isn’t his finest work, and claim that it really undersells his talent. Perhaps I did myself a disservice by not reading on, but hey – there’s only so many hours in a day, and this gal has a whole list of great books to get through!

Pratchett said that The Colour Of Magic was “written in protest”, and he intended to satirise earlier fantasy novels. He loved fantasy, but found pre-1990s work contained “too many dark lords, too much lack of thought”. I’d say he was pretty successful in that endeavour; he made a lot of sharp jabs at cliches and tropes of the genre, like the stereotypical revealing outfits worn by female characters, the ridiculousness of attempting to ride a dragon, and – in a style quite reminiscent of Don Quixote – the unbelievable baseless “quests” of protagonists and their sidekicks. This has led some critics to argue that you really need to be a fan of fantasy to understand and fully appreciate The Colour Of Magic (while, in his later books, Pratchett satirised the real world, which was more accessible for readers outside the usual genre market). I would argue the opposite is true. I think The Colour Of Magic is perfect for people who are normally skeptical of fantasy, because it pokes fun of all the cliches that scare or annoy us. It’s like Pratchett is saying to us: “See? It’s not all bad!”.


Naturally, given its popularity, there’s a screen adaptation: a two-parter made for television that combines The Colour Of Magic and The Light Fantastic. A few of the stars will be very familiar to fantasy fans, with Sean Austin (Samwise Gamgee from Lord Of The Rings) playing Twoflower, and Christopher Lee playing Death. Off-screen, the Discworld books have also been adapted into graphic novels and computer games, the perfect formats to capture a new generation of interested readers.

On the whole, I had much the same reaction to The Colour Of Magic as I did The Hitchhiker’s Guide To The Galaxy, which is really not surprising given their similarities in form and tone. It was a fun little romp, a great read to take one’s mind off their troubles and the real world collapsing around our ears, a great moment of escapism with clever parody and satire thrown in to keep it sharp. I’d recommend you give this one a go if you’re not normally into fantasy and you want to give it a try without committing to a doorstop novel that will languish on your bedside table for months.

My favourite Amazon reviews of The Colour Of Magic: