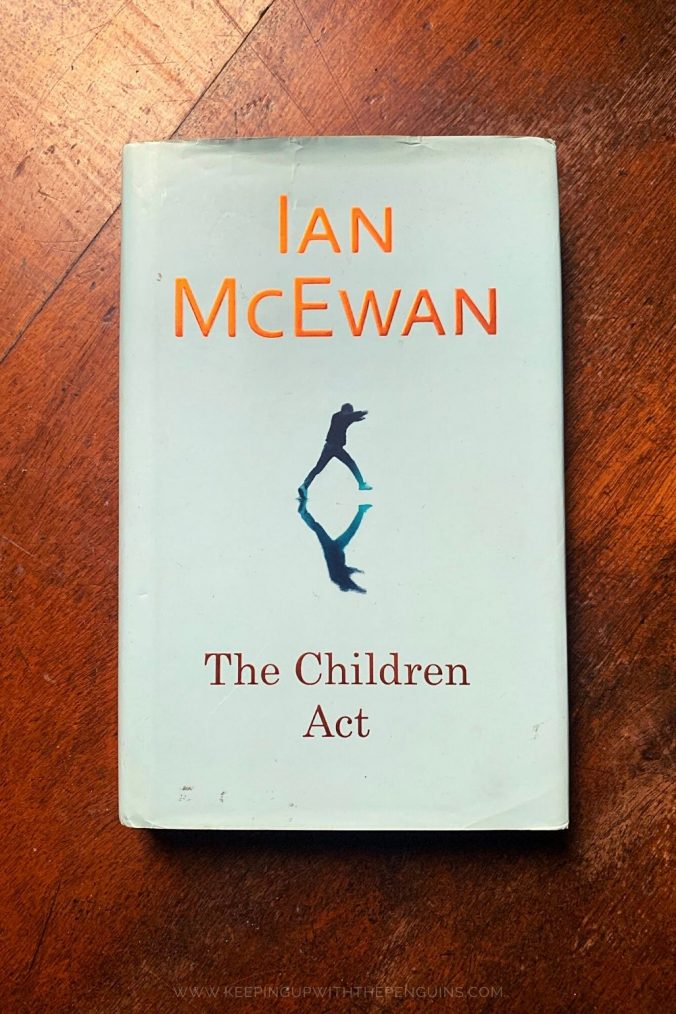 I started off this year reading and reviewing Ian McEwan’s Atonement. While I didn’t love it, I thought it might be nice to book-end the year with another one of his that’s been on my to-read shelf for years: The Children Act. It’s named for a UK Act of Parliament (Children Act 1989), and it has a fist-pump of a premise; a High Court judge is called to rule on the case of a 17-year-old boy refusing life-saving medical treatment on religious grounds.

Really, though, The Children Act is about the life of the judge, Fiona Maye, which is thrown into tumult when her long-time husband approaches her and tells her up-front he’d like to have an affair. He’s even got the woman all picked out, a 28-year-old statistician. It sounds like he’s being quite reasonable about the whole thing to me, but Fiona flies off the handle and gives him the boot. So, she’s not exactly in the best frame of mind when this kid’s case comes across her desk.

The 17-year-old Adam is a Jehovah’s Witness. He and his parents both take the “no blood products” rule pretty damn seriously, and refuse to consent to a transfusion, despite the fact that it means Adam’s leukemia will kill him. If Adam were legally an adult, there wouldn’t be anything his doctors could do to contest the decision, but seeing as he’s a few months shy of his 18th birthday, they appeal to the Family Court – to Fiona.

McEwan’s prose suits this story far better than it did Atonement. Atonement was about kids and self-destructive deception, while The Children Act is about ethics and mortality. His writing, which felt overwrought and pompous in Atonement, seems natural in the context of a well-educated very-British judge contemplating marriage and death.

I was surprised by how quickly the story moved. The Children Act is a short book (my edition runs 215 pages), but by half-way through Fiona had already made her ruling in Adam’s case. I was a bit mystified as to what could be left to say, and worried that McEwan might devote the remaining 100+ pages to the resolution of her marital woes – luckily, he cleared that low bar.

Fiona’s husband returns home, though things between them remain strained (at best), and she begins to receive letters from Adam. At first, they simply express gratitude for her treatment of his case, and anger at the hypocrisy of religion. Fiona decides to ignore the letters, hoping Adam would move on once he’d got it all off his chest, but then… well, it’s a bummer, I’ll tell you that much. The second half of The Children Act shifts down the dark gradient from weird to depressing real fast.

McEwan explained, after The Children Act was published in 2014, that he’d drawn his inspiration from a dinner party with a bench of judges (yes, that’s the correct collective noun, and yes, he actually pointed that out in the interview – tosser). He found that the way the judges spoke to one another, and the way they wrote their judgements, reminded him eerily of the ways novelists speak and debate each other’s work. It’s not hard to see how the plot of The Children Act was just a hop-skip-and-jump away from that experience, especially if red wine was involved.

So, I liked The Children Act much more than Atonement, but honestly? The book just got me really excited to watch the film, more than anything else. It stars Emma Thompson (love!) and Stanley Tucci (love, love, love!), and from the trailer I’ve decided that the film format suits McEwan’s plot far better than his writing does. I’m beginning to suspect that McEwan just isn’t for me… but there’s a couple more on the to-read shelf yet, so stay tuned for a final ruling.

My favourite Amazon reviews of The Children Act:

Books Made Into Movies

The Best Books Of 2021: My Reading Year In Review