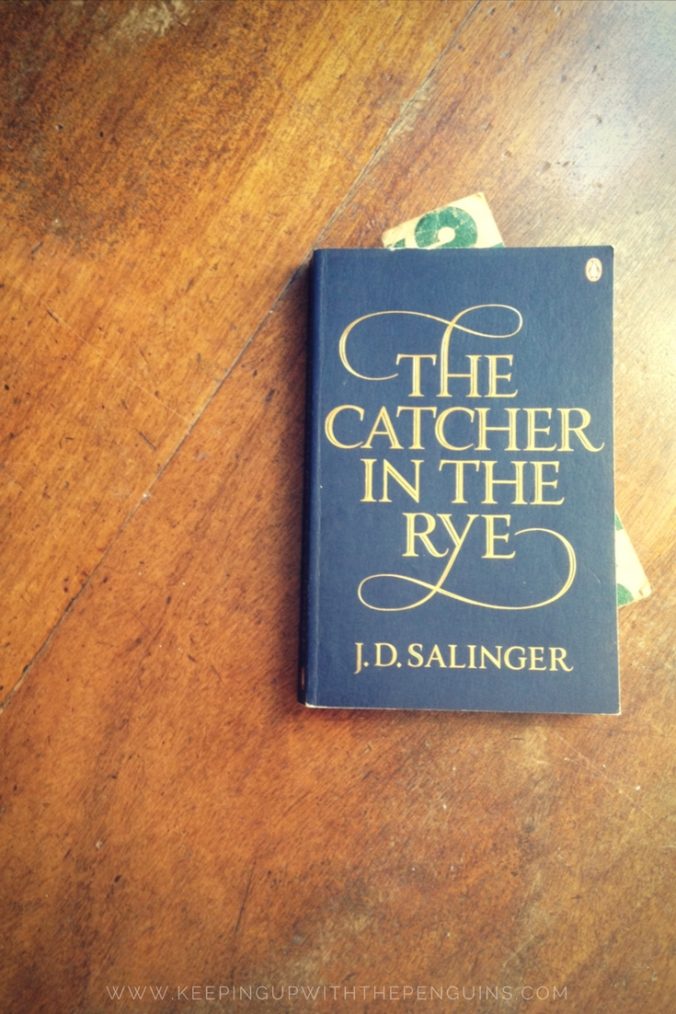 The Catcher in the Rye – J.D. Salinger

Because I’m a masochist, I chose another 20th century stream-of-consciousness novel for the next read. I picked up a never-read copy of The Catcher in the Rye at my favourite secondhand bookstore, from a stack of identical perfectly-preserved copies – assumedly donated by some closed store or failed online retail venture. An auspicious beginning, no?

J.D. Salinger’s 1951 novel was originally published for adults, but has since (apparently) become popular with adolescent readers for its themes of teenage angst and alienation. I say “apparently”, because I’m not sure that anyone’s actually asked the adolescents. Sure, there’s around 1 million copies sold every year, but I’m pretty sure most of those are mandated reading for high-school book reports. How I myself managed to escape that particular rite of passage is beyond me…

(The book’s also quite popular with murderers, as it turns out, so there’s that.)

The Catcher in the Rye has received basically endless critical acclaim, and also has the honour of being the most censored book in U.S. high schools and libraries throughout the sixties and seventies. Reasons for censorship include its frequent use of vulgar language, sexual references, undermining of “family values”, encouragement of rebellion, promotion of drinking, promotion of smoking, promotion of lying, and promotion of promiscuity. This excited me to no end! My apprehension about its style aside, any book that undermines so-called family values is one that I can get behind.

Straight off the bat, I actually liked the narrator (Holden Caulfield). He’s a bratty, rebellious teenager with a tendency towards profanity, tangential thinking, and wild exaggeration. Salinger’s characterisation was superb; it sounded like the diary of a teenage boy, you’d believe one had written it.

Be warned, though: The Catcher in the Rye is mostly internal monologue – not a whole lot of plot. You just follow this wayward kid around New York for a few days while he drinks and smokes himself into oblivion (and chickens out of losing his virginity to a sex worker). You find out, on the final page, that he’s relating this story to you from the confines of a psychiatric hospital. Not that it’s a shock twist in the end or anything like that – you kind of get the vibe that this kid is bonkers right from the outset.

Holden’s got some interesting insights, though, and I laughed out loud more than once:

So, I don’t know about bores. Maybe you shouldn’t feel too sorry if you see some swell girl getting married to them. They don’t hurt anybody, most of them, and maybe they’re secretly all terrific whistlers or something. Who the hell knows?

The Catcher In The Rye

I was surprised by how much I enjoyed The Catcher in the Rye, given my initial reservations about its style and the shell-shock of Mrs Dalloway (and, if I had to compare, I’d say that Mrs D was far more likely to make me want to kill someone, so all those murderers who loved Catcher should probably have read a bit more broadly).

Still, I’m not sure I’ll bother going back for seconds. I’d recommend The Catcher in the Rye to anyone who wasn’t forced to read it in high-school – you’ll probably enjoy it all the more for having avoided it for so long, as I did.

My favourite Amazon reviews of The Catcher in the Rye:

The Catcher In The Rye has one of my favourite opening lines in literature, I think it’s an absolute cracker. Check out more excellent openers from my bookish adventures here.

Describe A Book In A Single Sentence