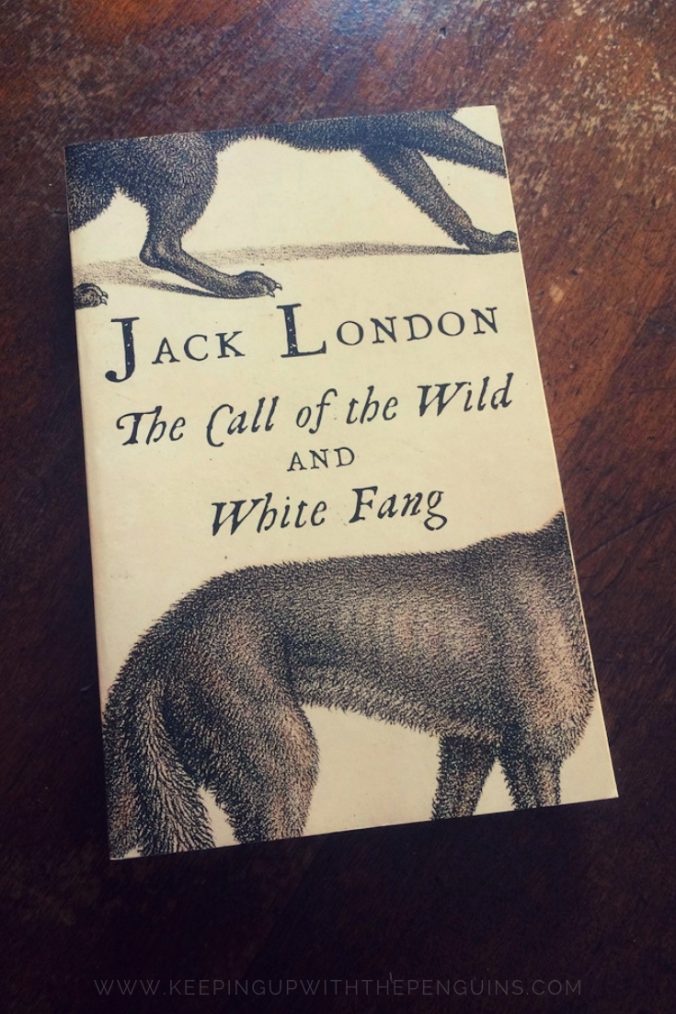 The Call Of The Wild – Jack London

Look at this pristine edition of The Call Of The Wild! I treated myself to a brand-new copy from a local indie bookstore. It’s another one that’s really tough to find second-hand, for some reason. This combo edition also includes White Fang, but I decided right at the outset that I wasn’t going to read that unless The Call Of The Wild was super-good and not too distressing. See, normally I’m not allowed to read books with dogs because I’m not equipped to deal with their inevitable death (why do authors love killing off dogs?!). With gritted teeth, I picked up Jack London’s best-known work…

I was right to be apprehensive. I’ll say this right at the outset: do not go into this book thinking it’s a heart-warming tale about a puppy who goes camping. Every page has dogs attacking humans, humans attacking dogs, dogs attacking each other… wahhhh! I know there are a lot of clever metaphors and allegories buried in the story, but that’s no fucking comfort to a dog-lover. Thankfully it’s very short (even shorter than Strange Case Of Dr Jekyll And Mr Hyde!), only 84 pages of torture. (Spoiler: I did not go on to read White Fang. I’ve quite had my fill of violence against animals, thank you.)

The Call Of The Wild is billed as an adventure novel, set in the Yukon during the 1890s Klondike Gold Rush. London had spent a lot of time in that area himself; he once said “it was in the Klondike I found myself”. He stayed just long enough to get himself a nasty case of scurvy, which was quite common at the time (believe it or not, fresh produce was hard to come by in those Arctic winters, so workers usually missed their 2-and-5-a-day). Still, the experience made a real impression, and gave London enough material to write his book.

When he got back to California, he pitched his story to the San Francisco Bulletin, but they told him that “interest in Alaska has subsided in an amazing degree” and rejected him outright. He persisted, though, and ended up writing The Call Of The Wild in four installments for The Saturday Evening Post. They paid him $750 for his trouble, and he then accepted a further $2000 from Macmillan, who published it in book form in 1903. Nuts to the Bulletin editors who turned him down, because it hasn’t been out of print since.


The story opens in California, where the central character – Buck, a pampered St Bernard-Scotch Shepherd – is stolen and sold into service as an Alaskan sled dog. Sled dogs were in high demand during the Gold Rush. To even reach the Klondike, miners had to navigate what was called “Dead Horse Pass” (charming), so named for the many carcasses that had piled up along the route. The poor horsies couldn’t handle the steep ascents and the harsh climate, so strong dogs with thick fur were called into replace them.

Buck is forced to fight for survival in his new environment, and not just in the metaphorical draw-upon-your-inner-strength kind of way. The humans charged with his care starve him, keep him in a cage, and beat him senseless, teaching him what he calls “the law of the club” (yes, I’m already crying).

When he’s sold on again, this time to dispatchers who take him to the Klondike, he learns from the other dogs how to survive the cold nights and rugged terrain. He ends up beating the leader in a fight (gahhh, stop it!), and he assumes his position as the head of the pack. Success ain’t all it’s cracked up to be though, because he proves himself so valuable that he’s sold on into tougher circumstances, and then sold into tougher circumstances again. This is one corporate ladder you do not want to climb.


Finally, Buck encounters a decent human – John Thornton – and he is nursed back to health. He follows Thornton and his team as they pan for gold, but he gets to run around and explore his new home in the woods for himself. He makes friends with a local wolf pack (awww!), but always return home to camp because he’s come to love his new human (double awww!). You’d think London would end it there, everyone’s happy, but NOPE! One day, Buck returns to find his beloved human murdered by a local Native American tribe. Incensed, he goes on a violent killing spree of his own, taking his vengeance and scaring the pants off the survivors. Lacking other options, Buck joins the wolf pack full-time, answering (here it comes) the call of the wild.

The book was enormously popular upon publication (dear me, why?). Macmillan’s first print run of 10,000 copies sold out immediately. And that popularity has continued through to the present, where London’s work is still taught in schools and he’s earned himself a place in the American canon. The success of The Call Of The Wild is what prompted him to write White Fang: “I’m going to reverse the process,” he said, “instead of devolution… I’m going to give the evolution, the civilization of a dog.” That’s why the works are so often sold in a single volume. Perhaps White Fang is where I’d find the happy ending I was hoping for Buck, but I don’t trust London anymore.


The Call Of The Wild was also fairly controversial, because London had the gall to anthropomorphise a house pet. Critics said he was a “nature faker” (ooh, burn!) for attributing human feelings to a dog. But really, London was just calling upon the oldest form of storytelling, our fables and fairy-stories that commonly attribute feelings and speech to animals, to send the reader some greater message or moral. In this case, it would seem that London’s message was Capitalism + Industrialisation = Bad. Buck had to be forced to give up his creature comforts, but once he does that his instinct takes over and he returns to a more “natural” way of life. He shows us that civilisation is a thin veneer, easily broken, and animals (including humans) are wild and primal at their core. He inverts the coming-of-age tropes, and calls upon a lot of epic and hero archetypes, with Buck being unmasked (rather than civilised) by his journey. London may have ripped out my heart, but it would seem he was damn clever in the way he did it.

I’ve got a pretty strong stomach, on the whole, but my soft spot for dogs made The Call Of The Wild a fucking difficult read. I can appreciate what London was doing, but for me this book was right up there with A Clockwork Orange on the confronting scale, perhaps even exceeding it. Really, its only saving grace was that it was so short! I’m not sure I could have coped with much more. It was beautifully written in parts, the scene-setting was incredibly evocative, but why couldn’t London have tortured oysters or skunks or something instead? Dog-lovers, beware: this is not the book for you.

My favourite Amazon reviews of The Call Of The Wild:

7 Books That Will Take You By Surprise

7 Most Heartbreaking Deaths In Literature