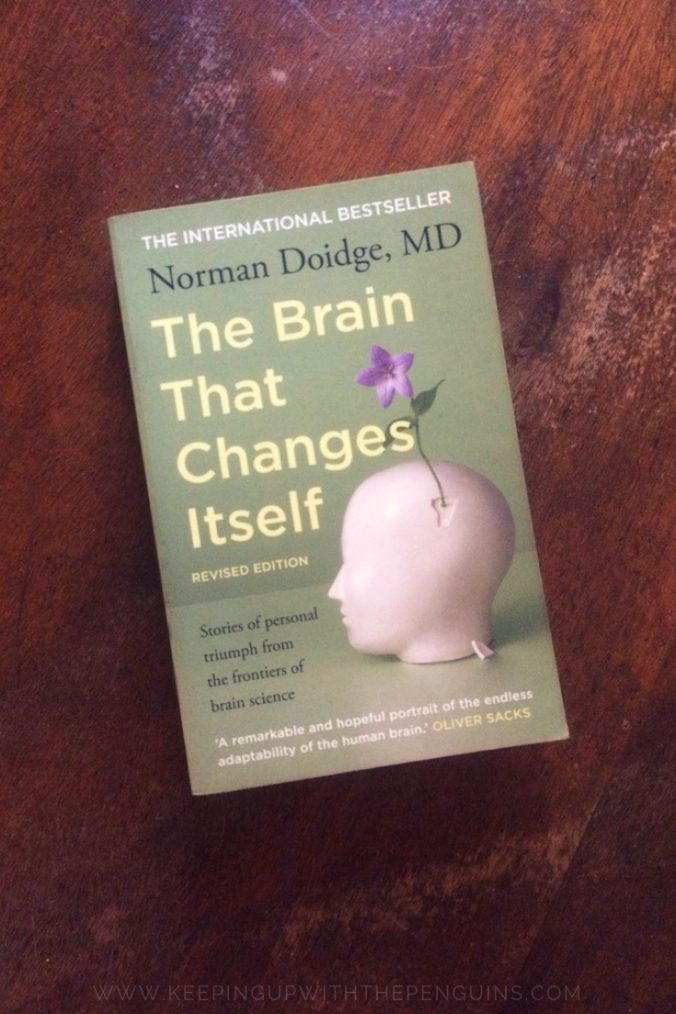 The Brain That Changes Itself – Norman Doidge

Roll up, roll up: it’s time to learn a thing or two about your thinking meat. Norman Doidge is a psychiatrist, psychoanalyst, and brain researcher, and he’s taking it upon himself to educate the world on the science of neuroplasticity. And what is…? Well, neuroplasticity is the fun notion that your brain isn’t an immutable lump of hard-wired neurons, but a wonderfully malleable organs that changes and grows and adapts to everything we throw at it, across our entire life span. Presenting his magnum opus: The Brain That Changes Itself.

The cover promises “stories of personal triumph from the frontiers of brain science”, and that might be a bit of an overstatement but Doidge does use case studies to teach us all about the brain’s capabilities. There’s the story of the young woman who was born without half her brain, and yet manages to function almost normally with her existing half doing twice the work. There are parents and children who have cured learning disorders, people with vision impairments who regain some of their sight, and many, many stroke patients that regain functionality beyond even the most optimistic of expectations.

“Pain is [the central nervous system’s] opinion on the organism’s state of health, rather than a mere reflexive response to injury… the brain gathers evidence from many sources before triggering pain… pain is an illusion… a construct of our brain.”

The Brain That Changes Itself (Norman Doidge)

I really learned a lot from The Brain That Changes Itself and it was a really interesting read, but… well, it’s not without its problems.


For starters, the International Journal of Psychoanalysis published a review of The Brain That Changes Itself, and it highlighted a lot of issues with Doidge’s work. It states, quite plainly, that neuroplasticity is basically irrelevant to the study of psychoanalysis, and pokes some serious holes in Doidge’s apparent belief that his psychoanalyst background gives him enough knowledge in the field to hold himself up as a brain expert. Now, I’m comfortable saying that I’m not sure I agree entirely that neuroplasticity is “irrelevant” per se to the practice of psychoanalysis (note: I did complete a Bachelor of Psychology with honours a few years back, so I’ve got some level of insight), but I can still kind-of see their point. The chapter where Doidge focused specifically on psychoanalysis, his bread and butter, got pretty woo-y, and seemed to drift away from the more rigorous scientific approach he took in other parts of the book. As fields of study, psychoanalysis and neuroscience diverge pretty widely; I’m not saying there’s no cross-over, but Doidge does draw some pretty long bows.

Personally, I was more concerned with Doidge’s descriptions of experiments performed of animals in the pursuit of neuroscience. The Brain That Changes Itself features, in nearly every chapter, graphic descriptions of some really horrid experiments that Doidge (ever the “rational scientist”) doesn’t critically examine. In fact, he doesn’t even mention or acknowledge that, say, sewing a monkey’s fingers together might present something of an ethical issue. He does describe – rather dismissively – one PETA intervention in research conducted by one of his interviewees. It’s clear from the way that he writes that he sits firmly on the side of the researcher. It would actually be an interesting exercise, if you’re up for it, to read The Brain That Changes Itself side-by-side with We Are All Completely Beside Ourselves, to get two different perspectives on this issue.


Just to really hammer home for you how un-woke Doidge is: he uses quite a few ableist terms, which is really jarring given the otherwise supportive and positive tone of the book. He also has a random burst of puritanism, preaching about all the ways in which pornography destroys any chance of having healthy sexual relationships… or something? He really wasn’t too clear on that point. I don’t think Doidge intended any harm, and he maybe didn’t realise he came off sounding like an ableist prude, but that doesn’t excuse him. If he, or his publishers, had made a little more effort to approach sensitivity readers, these issues could have been resolved with one more vigorous edit (unlike his attitude towards animal testing which is, frankly, abhorrent, and clearly deeply ingrained).

The Brain That Changes Itself ends pretty abruptly; there’s no real conclusion or anything, which I found super-weird. Doidge offers a couple of appendices that are basically longer, broader chapters – talking about culture and the internet and whatnot, in the context of neuroplasticity – then he dives straight into his acknowledgements and notes. It’s an especially odd choice given how linear the book is. This is not the type of non-fiction book that you can just flick through, reading chapters that interest you willy-nilly. Doidge tackles some pretty hefty neuroscience, and he does so by building upon each previous story and delineating relationships between concepts and experiments. If you try to jump in mid-way through, you’re going to have a hard time (and you’re going to miss a lot). So, why wouldn’t Doidge make a point of concluding properly? Bringing all the pieces together and cementing them in the reader’s mind? It seems a really odd choice.


Anyway, in the end, even with all its issues, The Brain That Changes Itself is still chockers with interesting information, and I guarantee you’ll learn something. It’s not as witty and folksy as Bill Bryson’s A Short History of Nearly Everything, but it’s not as much of a mind-fuck as Stephen Hawking’s A Brief History of Time. If you’re interested in how your thinking meat works, you’ll get a lot out of it, but I’d recommend strongly against having it be your only source of information in this field – it’s flawed in many respects, and the best way to compensate for that is to fill the gaps with other books that do it better.

My favourite Amazon reviews of The Brain That Changes Itself:

The Best Mothers In Literature

How To Read: The Psychology Of Reading