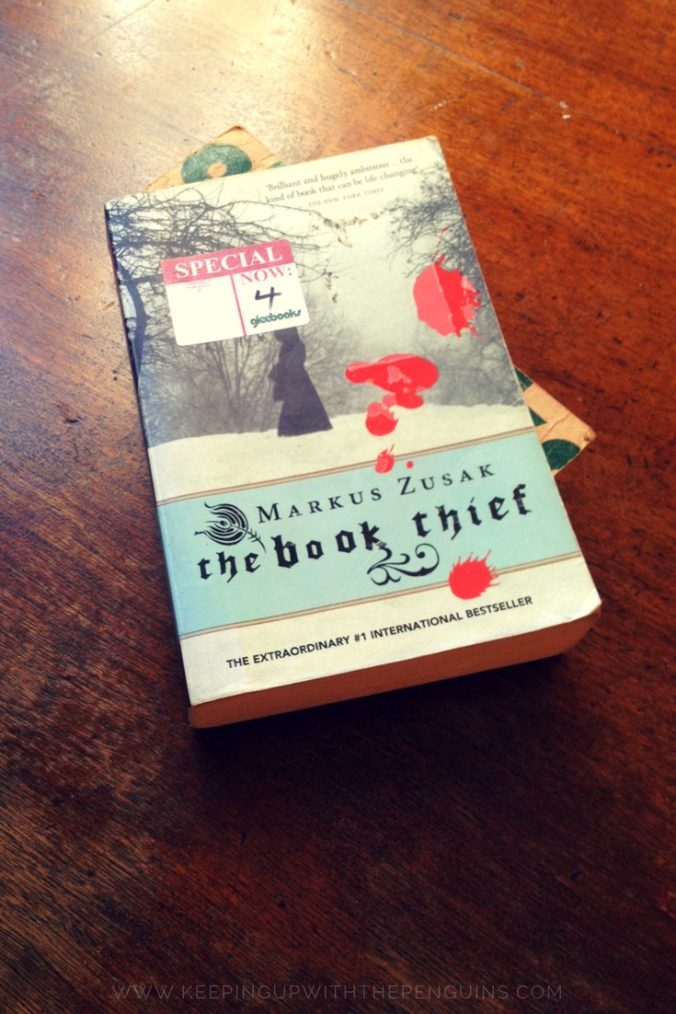 Remember that bargain bin, where I picked up Lady Chatterley’s Lover? Right next to it was The Book Thief, number one book on the Dymocks 101 of 2016, an international best-seller, marked down to just $4. Seemed pretty reasonable, so I picked it up quick smart!

This is one of the books on my reading list that I’ve heard plenty of, but not heard much about. Before picking it up, I was pretty sure it had been made into a movie starring some not-unheard-of people but, gun to my head, I couldn’t have told you the first thing about the story. Even so, an EXTRAORDINARY #1 INTERNATIONAL BESTSELLER is probably not to be sneezed at, so I had pretty high expectations.

I’m not gonna lie: it starts out pretty heavy. Turns out, it’s narrated by Death (how post-modern!). Death tells us we’re in Nazi Germany, it’s cold as balls, a kid dies on a train, and his mother and sister have to bury him quick smart out in Woop Woop before they carry on to dump the remaining child with a foster family. Liesel – the still-alive kid, who turns out to be the protagonist – is freaking the fuck out. She steals a book from the gravedigger, even though she can’t read at all. Clearly, this story won’t be fun for anyone involved.

It builds up to a rollicking pace rather quickly, but the writing style takes some getting used to – lots of short, bursty sentences that are Laden With MeaningTM. Some of it was actually kind of pretty, but I couldn’t shake my suspicion that Zusak was just trying a bit too hard.

He crams The Book Thief chock-full with misery and unfortunate events. The foster family is no Brady Bunch, and just as Liesel starts to settle in, they also start harbouring a Jew in the basement, feeding him scraps and surreptitiously emptying paint tins of his piss outside. It felt for a minute like the foster mother was being set up as the “bad guy” (nope, that’d be Hitler), but I liked her most of all. She told everyone to lick her arse if they disagreed with her, among other expletive-ridden rants.

Liesel develops a close relationship with her foster father (Hans), who starts teaching her to read. There’s one particularly touching scene where she figures out that her mother was taken by the Nazis for being a communist and Hans smacks her for saying she hated Hitler in public. The story continues in much this same vein: people die, people get sent to concentration camps, kids steal food to eat, and places get bombed. Zusak fully takes us through how much the Nazis sucked.

The narration-by-Death is a cute quirk, but otherwise The Book Thief is a super-familiar narrative. I think we’re all well aware that the Nazis were awful and literacy is important, and there wasn’t really anything else new or revelatory. I don’t think I got anything out of The Book Thief (aside from the cool narrative technique) that I didn’t get already reading The Diary of a Young Girl when I was twelve.

On that note, though, we really should keep in mind that The Book Thief – despite its heavy subject matter – is Young Adult fiction. That means it’s not a very laborious read for the grown-ups, which makes for a nice change of pace. I’d say The Book Thief is great for someone on the upper end of the Young Adult age bracket, who’s just starting to learn about WWII… or for anyone who wants to feel smart without having to work too hard for it. 😉

My favourite Amazon reviews of The Book Thief:

What The Smut? Books That Are Sexier than Lady Chatterley’s Lover