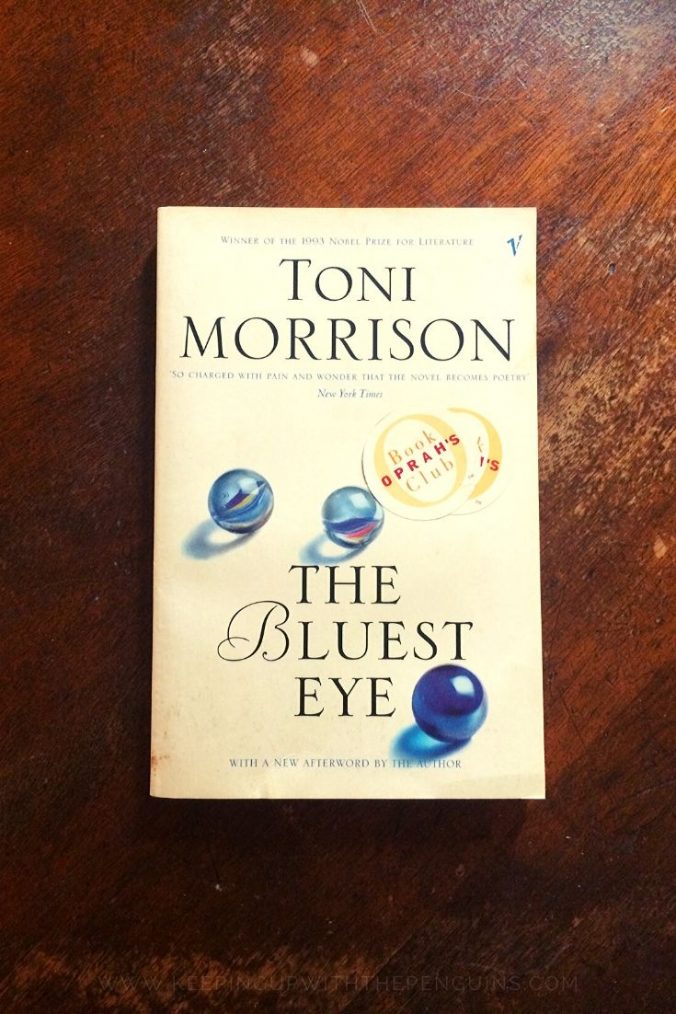 Having read Toni Morrison’s most-beloved (ha!) novel first, I decided to go with her very first novel next. The Bluest Eye is an iconic novel about beauty, violent jealousy, and the source of racial self-loathing, first published in 1970.

The Bluest Eye is short, just shy of a couple hundred pages, so it can be read in one sitting if you’ve got the peace and quiet you’ll need to really focus on it. I wouldn’t characterise it as a quick read, because there is so much going on and it’s very dark, but it’s a short one at least.

Speaking of the dark themes, I’m going to give you the trigger warnings right now, because I won’t be able to avoid talking about them from this point on. Heads up for family violence, rape (including that of a child), and animal cruelty (including a particularly horrendous dog death that really messed me up).

Okay, on with it: the action takes place in Lorain, Ohio – which was actually Morrison’s hometown! – in the early 1940s, just before war broke out. It all revolves around Pecola, a young Black girl who is widely considered ugly due to her dark skin and her unpolished appearance.

The point of view, though, is that of Claudia, a girl around Pecola’s age whose parents foster Pecola at various times. See, Pecola’s home life leaves a lot to be desired. Her family lives in an abandoned shop front, and her father is an unreliable alcoholic who sexually abuses her (I warned you!) and beats her mother. When her father accidentally burns the place down, Pecola goes to stay with Claudia’s family, until… well, it’s not clear when exactly, because her circumstances seem unlikely to improve.

Flashbacks throughout The Bluest Eye weave together Pecola’s story, and Claudia’s, and that of Pecola’s parents (Cholly and Pauline), as well as other characters that are in Pecola’s orbit. It’s a clear precursor to books like Girl, Woman, Other, that use multiple characters’ perspectives to tell a wide-ranging story around a theme.

There are no “big reveals” or “climaxes” exactly. It’s more like The Bluest Eye circles around a major time bomb – the fact that Pecola is pregnant, after being raped by her father – that will inevitably go off. It is through that pregnancy that Morrison paints a portrait of Black life in a WASP community in that era. As if it all wasn’t sad enough, Pecola’s child doesn’t survive, an outcome that Claudia blames on herself (she and her sister planted marigolds, in the hopes that the plant’s survival would guarantee the child’s, but of course neither flourished).

In the end, Claudia realises that her community uses Pecola – her “ugliness”, her poverty, her terrible circumstances – to make themselves feel better. The title – The Bluest Eye – comes from Pecola’s desperate attempt, towards the end of the novel, to turn her eyes blue, in the hopes that it would make her “pretty” (read: more white) and change her fortune. Pecola descends into madness, and lives a life of delusion, where she believes she has succeeded in changing the colour of her eyes.

So, yeah. There’s not much joy to be found here.

Morrison has said that she wrote The Bluest Eye because she was “interested in talking about black girlhood”. It seems sadly inevitable that a book on that subject would end up a foundational text about the impact of Euro-centric beauty standards and internalised loathing. She subsequently said her ‘job’, as she saw it, was to “rip that veil drawn over proceedings too terrible to relate”, which she certainly achieved.

Morrison also says, though, that she’s not satisfied with the execution of her ideas in retrospect, which is a shame—and, honestly, a brave thing to admit to a reader who has just finished her book.

And, of course, I must mention that The Bluest Eye – being a book about racism, incest, molestation, and so forth – has been subjected to countless bans and instances of censorship. It’s not ancient history, either; as recently as last year, it made the top ten list of most-banned books in the U.S. I mean, I understand that these subjects are tough and not all kids (heck, not all adults) are up to it – and there’s no shame in that – but denying others access to Morrison’s brilliant Nobel Prize-winning work is just unconscionable. So, there.

My favourite Amazon reviews of The Bluest Eye:

The Tap Cats Of The Sunshine Coast – Christine Sykes