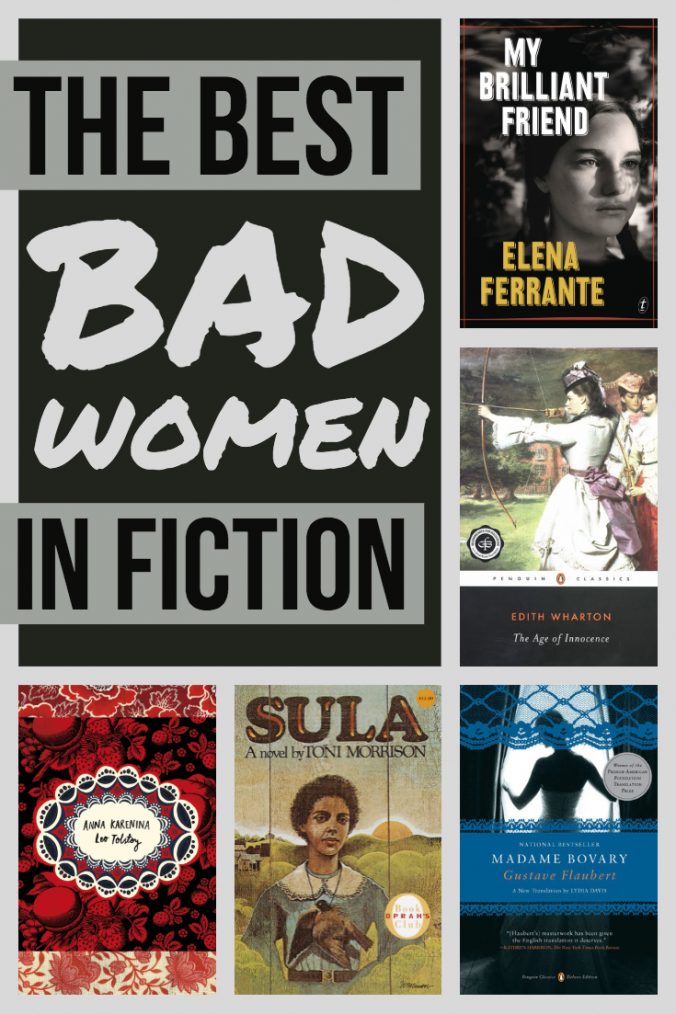 For too long, complex narrative arcs have been distributed unevenly. Our evil villains and deeply flawed protagonists have been almost exclusively male. When women do get a look-in, it’s often tokenistic or cliche (the trope of the overbearing mother, written in solely to justify a young male character’s anti-social behaviour, for instance). Women, the “gentler sex”, are almost always portrayed as merciful and nurturing. When they aren’t, their tactics for evil are usually reduced to “feminine wiles” – only men have been allowed to be violent, cruel, and unfeeling.

However, with growing awareness of that imbalance has come a growing demand for “bad women” in literature: women who are mean, ugly, ungrateful, indulgent, deviant, and different. Just this week on Keeping Up With The Penguins, I reviewed The Girl On The Train, narrated by a notoriously unreliable and unlikeable black-out alcoholic. I love seeing this particular pendulum swing back!

Now, I don’t mean to imply that all fiction prior to the 21st century was a barren landscape of retiring women. In fact, some of my favourite bad women are buried way back in the canon of the classics. It’s just that they were so infrequent as to be almost invisible. Finally, some of them are starting to see the light of day. In celebration of that, I’ve put together a list: the best “bad women” in fiction.

From Matilda by Roald Dahl

This is the first example that I can recall from a book of my childhood, the incomparable Matilda. Miss Trunchbull struck fear in the hearts of children everywhere. She was a cruel and exacting despot, ruling with the iron fist over Matilda’s school and standing in stark contrast to beloved teacher Miss Honey. “The Trunchbull” laughed in the face of the maternal sensitivities often written onto female characters by default; she openly hated children (“I have never been able to understand why small children are so disgusting, they are the bane of my life”) and found increasingly creative ways to punish and torture them. I was terrified of her as a child, but the older I got the more I came to appreciate and respect her violation of the “rules” for women. She was ugly, brash, fiercely un-maternal, and she did not give a fuck what anyone thought.

Admittedly, I didn’t love Vanity Fair. The first few hundred pages were good, but the rest was a total snooze-fest. The only redeeming feature towards the end was Becky Sharp, the cunning, manipulative social climber. Granted, she definitely used her feminine wiles to get what she wanted (Thackeray was a man of his time, after all) but at least she was completely unapologetic about it. She had no compunction about luring men into her trap, and standing on their shoulders to get to the top of the social ladder. Becky wasn’t afraid to do the “wrong” thing; perhaps not a universally admirable trait, but in this case it got Becky a far happier ending than any of the other miserable sods in Vanity Fair. Read my full review of Vanity Fair here.

From Madame Bovary by Gustave Flaubert

Emma Bovary had the audacity to become intolerably bored with the banal domestic life that her society had deemed “appropriate” for her. Over the course of Madame Bovary, she descends into a spiral of alcohol, adultery, and debt, culminating in her suicide. I suppose we could call her selfish and shallow; after all, she puts a hell of a dent in her husband’s finances to buy herself pretty things. But a more sympathetic reading shows her to be a caged bird, beating her wings and struggling to get free from her stifling, prescriptive life. As far as “bad women” go, she was the first one to make me think “There but for the grace of God”…

From Sula by Toni Morrison

It takes a while for the character of Sula to emerge in Morrison’s critically acclaimed book Sula, but it’s worth the wait. Sula completely disregards every expectation of a woman in her position, and openly rejects the social conventions so determinedly upheld by her community. She defies gender roles, she is promiscuous, she is “disfigured” by a birthmark, and she is, above all, deeply independent. Sula has been hugely influential in the development of feminist literary criticism, and the titular character is something to behold.

From My Brilliant Friend by Elena Ferrante

Lila from Ferrante’s My Brilliant Friend is a bad woman in the making (a “bad girl” I suppose). Admittedly, she is very beautiful and charismatic, which buys her a certain kind of privilege, but she is also cruel, irreverent, manipulative, and overtly sexual. In the context of a poor town outside of Naples, Lila’s self-determination and bravery is all the more commendable. Over the course of the rest of the Neapolitan novels, her relationship with the narrator Elena – and her relative “bad”ness – ebbs and flows, but at the end of the day, she’s bad but brilliant, all the way through. Read my full review of My Brilliant Friend here.

From The End Of Innocence by Edith Wharton

The “badness” of women is a relative concept, of course. Countess Olenska’s indiscretions in The Age of Innocence might seem laughably benign to us today, but in her own time she was the height of scandal. The way that she spoke, her unconventional tastes, her lack of concern for social convention (clutch my pearls!), and her willingness to think for herself set her apart from the society wives of New York in the 1870s. Wharton wrote Countess Olenska masterfully, combining her brazenness and her tolerance with a deft hand. A bad woman ahead of her time! Read my full review of The Age Of Innocence here.

From Anna Karenina by Leo Tolstoy

Fun fact: Tolstoy originally wrote Anna Karenina as a hideously ugly woman, in hopes of making the reader find her as disgusting as he initially did. As he wrote, he found her more and more redeemable, and that’s how she ended up a great beauty. In almost every other respect, though, she remains a bad woman. She seeks love in an affair outside of her marriage, and neglects her children (the “baddest” thing a woman can do). She indulges her own whims and desires in a way that Tolstoy intended for us to find repugnant, but there’s something irresistible about a woman who so determinedly sets fire to her own life.

I must add a couple of honourable mentions: Hester Prynne of The Scarlet Letter, and Irene Adler of The Adventures of Sherlock Holmes, both worthy of the respect we should afford to all bad women. Are there any others I’ve missed? Who are your favourite bad women in fiction? Let me know in the comments below (or join the conversation over at KUWTP on Facebook!).

The Girl On The Train – Paula Hawkins