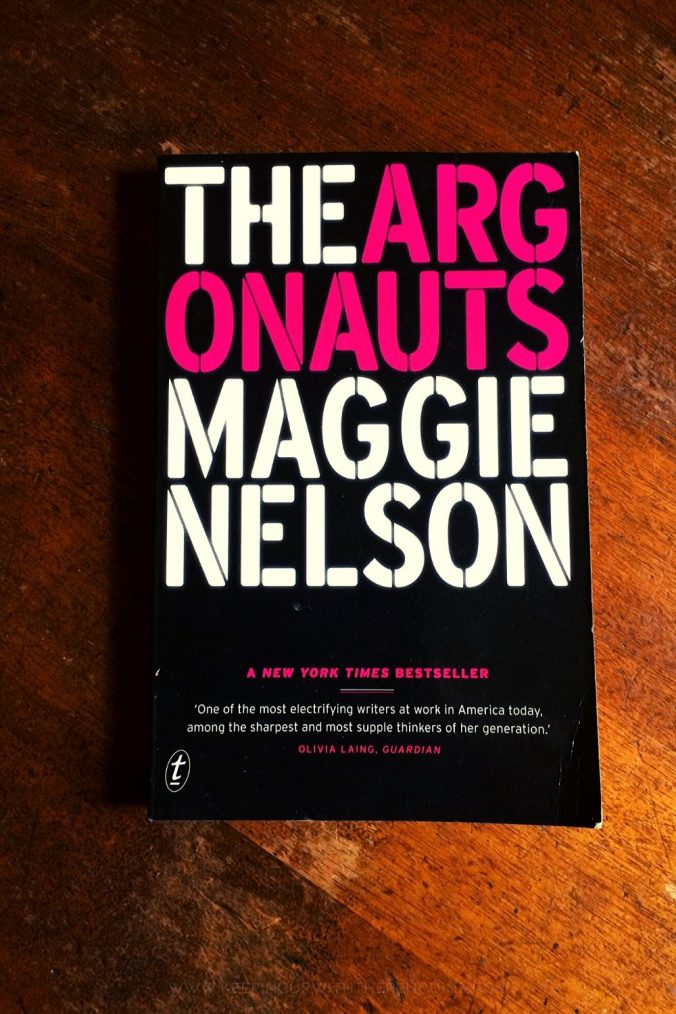 The Argonauts is a pillar of the contemporary queer canon, so frequently invoked that it’s practically become cliche. It’s the shiniest jewel in American writer Maggie Nelson’s crown. I’ve previously read her fragmentary homage Bluets (for study) and her verse memoir Jane: A Murder (for fun), so I’m not sure why I haven’t picked this one up before now. According to the blurb, it’s a “timely and genre-bending memoir that offers fresh and fierce reflections on motherhood, desire, identity, and feminism… a rigorous exploration of sexuality, gender, and notions of family,”.

For such weighty and broad subject matter, The Argonauts is a slim tome – just 180 pages. It’s told in snippets, paragraphs, rather than chapters (clearly the poet coming out in Nelson), but there’s still a narrative thread to follow. It’s a trick that lets her tell a story but also turn on a pin when it comes to subject, sense, and style. Another note on the form: rather than using footnotes or in-text references, Nelson logs her sources in the margins, a feature that makes the reading far more smooth and I would love to see more widely adopted.

Technically speaking, The Argonauts is a work of “autotheory”, combining philosophical/academic ideas with the anecdotal evidence of memoir. Nelson explores all those lofty ideas from the blurb through the story of her romance with Harry (to whom the book is dedicated), their courtship and their making of a family. Two significant paths run parallel: Harry’s transformation as they begin taking testosterone and undergo reconstructive chest surgery, and Nelson’s as she undertakes cycles of IVF and becomes pregnant.

From the marketing and chat around The Argonauts, I’d really expected Harry’s story to get more airtime; this is the queer love story after all, about making a baby with a non-binary/masc partner. But Nelson was overwhelmingly introspective, far more focused on what was going on inside her own body. I’m a bit undecided as to whether this is a good thing or bad.

The Argonauts is not an easy read in the sense that Nelson forces you to think – really think – about everything she’s saying, but it’s full of wonderful insights perfectly expressed, like:

I get why it’s politically maddening, but I’ve also always thought it a little romantic – the romance of letting an individual experience of desire take precedence over a categorical one.

I must admit, I rolled my eyes when she quoted Deluze & Parnet on page eight (page eight! if a bloke in a bar dropped those names that early in a conversation, I’d dump him on the spot), but the saving grace was that Nelson did so in a passage that perfectly depicted the discomfort of asking for pronouns and resorting to friend-assisted internet research of a paramour, to avoid asking. This is what I’m talking about, this is the vibe of The Argonauts.

What concerns me is I felt there was a certain elitism in Nelson’s expression. This isn’t Gender Queer Parenting For Dummies. She seems to assume a level of education, a familiarity with certain writers and academics (ahem-Deluze-ahem!), that readers who might benefit most from her work don’t necessarily have. That’s not to say that they (well, we) don’t or can’t understand The Argonauts, it’s just that it doesn’t feel like we’re being invited to do so.

Of course, we can’t expect every writer to write for every audience, but this isn’t marketed as an academic text. If it had been, I would have gone in with a different set of expectations and perhaps not been so disappointed or confused by the high-falootin’ talk. Still, assuming you are part of Nelson’s (perhaps subconsciously) intended audience, you’ll find The Argonauts a poignant and resonant read.

What really sticks with me, more so than any academic thought or theory, is Nelson’s love for Harry. It shines, on every page. Even when they disagree, even when they’re scared, even when things are awful. Not to be sappy about it, but Nelson’s obvious and obliterating love for Harry and their family was my favourite part of this complex and multi-faceted book, and I would say The Argonauts is worth reading for that alone.

My favourite Amazon reviews of The Argonauts: