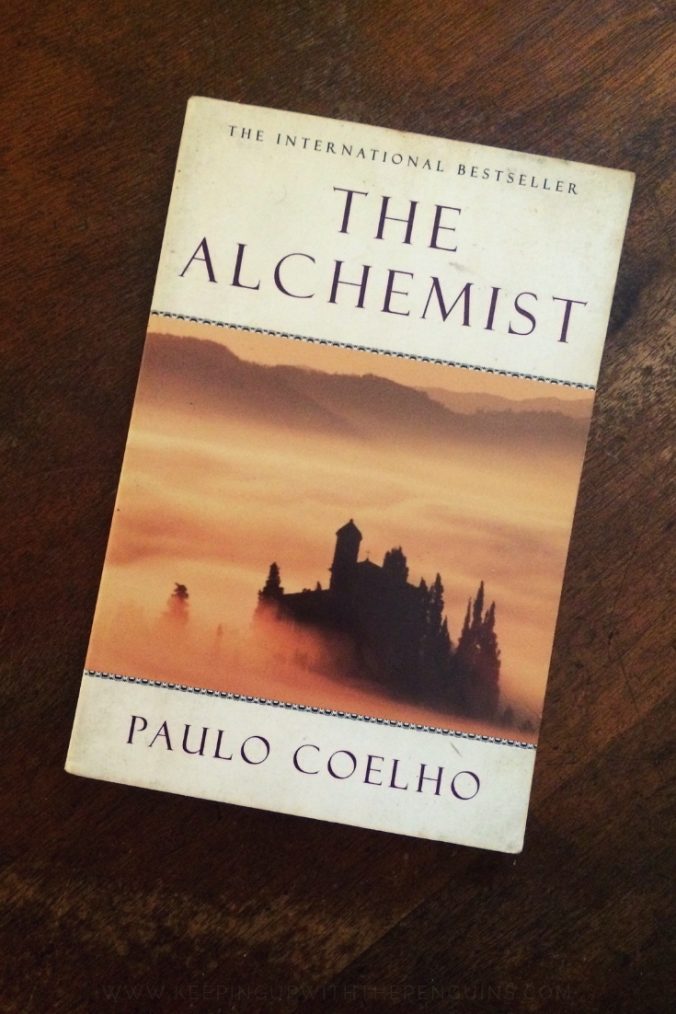 I think I’ve seen The Alchemist under the arm of just about every hippie I’ve ever met… and I’ve never once asked any of them about it, for fear that it would “change my life” or “give me a new perspective” or “open my mind to spirituality” or some shit. Maybe that makes me a cynic, but so be it! The point is that, like most of the books on my original reading list, I knew very little about The Alchemist going in, but in service of my aim to Keep Up With The Penguins, I went in regardless.

The cover of this edition promises “a fable about following your dreams”, and I suppose it delivered, technically. Like any fable, it wasn’t a tough read, and I burned through it in just a few hours (the fastest I’ve finished any book for this project, as I recall). The Alchemist reads like a fairytale, with very simple and straightforward language; I wondered if it read the same way in the original Portuguese, but I guess I’ll never know.

Oh, yeah, a bit of background: Paulo Coelho is a Brazilian author, and The Alchemist was originally written in Portuguese (“O Alquimista”). This version was translated into English by Alan R. Clarke, and it has been translated into some 70 other languages as of 2016.


Anyway, The Alchemist is an allegorical novel. It starts with an Andalusian shepherd, Santiago, having recurring dreams about finding treasure buried under the Egyptian pyramids (haven’t we all?). He stumbles across a Romani fortune-teller, who confirms his suspicion that the dream is prophetic – and believe you me, in my head I’m screaming “BUDDY, THIS IS NOT A GOOD PLAN!”, but he doesn’t hear me. Then he sits down to have a chat with a King disguised as a pauper, who tells him:

“When you want something, all the universe conspires in helping you achieve it.”

(So, The Secret totally ripped him off, but that’s not my business.)

Anyway, the rest of the book is pretty much Coelho reinforcing that rather trite philosophy, over and over again. Santiago’s journey to Egypt is a total shit-fight. He gets robbed, and has to work in a jewellery store for a year to make his money back. Then he makes his way through the desert, encountering mortal peril every step of the way and buddying up with a bloke who really wants to become an alchemist (don’t get excited, he’s not the titular character). They find an oasis, and there Santiago falls in love with a girl (conveniently forgetting all about the merchant’s daughter who he also “loved” back in Spain). He leaves her hanging to travel the rest of the way through the desert, and en route he meats The Actual Alchemist(TM), who teaches him to “listen to his heart” (very insight, much wise).

The two of them come within a bee’s dick of becoming collateral damage in a tribal war, and when Santiago finally makes it to the bloody pyramids, he gets the living shit beat out of him by a local gang. Then – awesome timing! – he has another “prophetic”  dream that tells him the stinking treasure is actually buried under a tree in his hometown. I swore, loudly, when I read that part.


I know, I know: it’s a beautiful story about overcoming obstacles and faith and persistence and all of that… but let’s be real, sometimes you’re better off just calling it a day and heading back to your sheep and the merchant’s daughter. Maybe that means you miss out on the treasure, but you get beaten and robbed and taken prisoner far less frequently.

Coelho wrote the book almost as quickly as I read it; it took him just two weeks, in 1987. He later explained that he was able to spew it out so quickly because the book was “already written in [his] soul”. And that tells you pretty much everything you need to know about Coelho.

Maybe there’s something in his whole faith and persistence shtick, because The Alchemist’s success came from pretty humble beginnings. It was not an instant best-seller, by any stretch. Coelho first sold it to a small publishing house, who gave it a small print run in Brazil, but they ended up handing him back the rights because they figured they’d backed the wrong horse.

But Coelho kept the hustle alive: he self-published, and fought the good fight, until finally – finally – his book took off in France, and became an “unexpected” best-seller in the mid ’90s. It’s a great testament to the power of word-of-mouth marketing, because this was pre-Facebook and (until he hit the big time) Coelho had no budget for any other publicity.

Given The Alchemist’s enduring (eventual) popularity, you might be surprised to learn it’s not yet been adapted for the big screen. Coelho was reluctant to sell the rights, believing that “a book has life of its own inside the reader’s mind” (or some hippie shit like that), and film adaptations rarely live up to the book. But, over time, he “opened his mind” to the possibility (and, I’d imagine, the piles of money offered that got bigger and bigger – even hippies can’t resist the lure of fat stacks). Warner Bros bought the rights in 2003, but the project stalled for several years. Then, in 2008, Harvey Weinstein announced that he had bought the rights and would produce the film himself. By 2015, he’d secured a director, and a lead actor, but then… well, yeah. Weinstein had some other shit going on. He ain’t going to be producing anything for a while. So, Coelho keeps the money, and he doesn’t have to see his magnum opus butchered on the big screen by a notorious sexual predator. Everyone’s a winner!

I can see why hippies love The Alchemist. I was right in my suspicion: there’s a lot of spirituality and listening to your heart and all that guff. I’m definitely too cynical for this book – or maybe the book is too earnest, whichever you prefer. As the New York Times said, it’s more self-help than literature. I’d describe it as The Secret meets The Divine Comedy. The main tick in its column is that it’s an all-ages read, as far as I can tell, so if you’re looking to cheer up a stressed-out kid this would be a good one to read out loud to them. If you’re reading it alone… well, at least it’ll be over quickly. And maybe you’re not dead inside like me, so you might even enjoy it.

My favourite Amazon reviews of The Alchemist:

9 Great Books That Haven’t Been Made Into Movies… Yet!