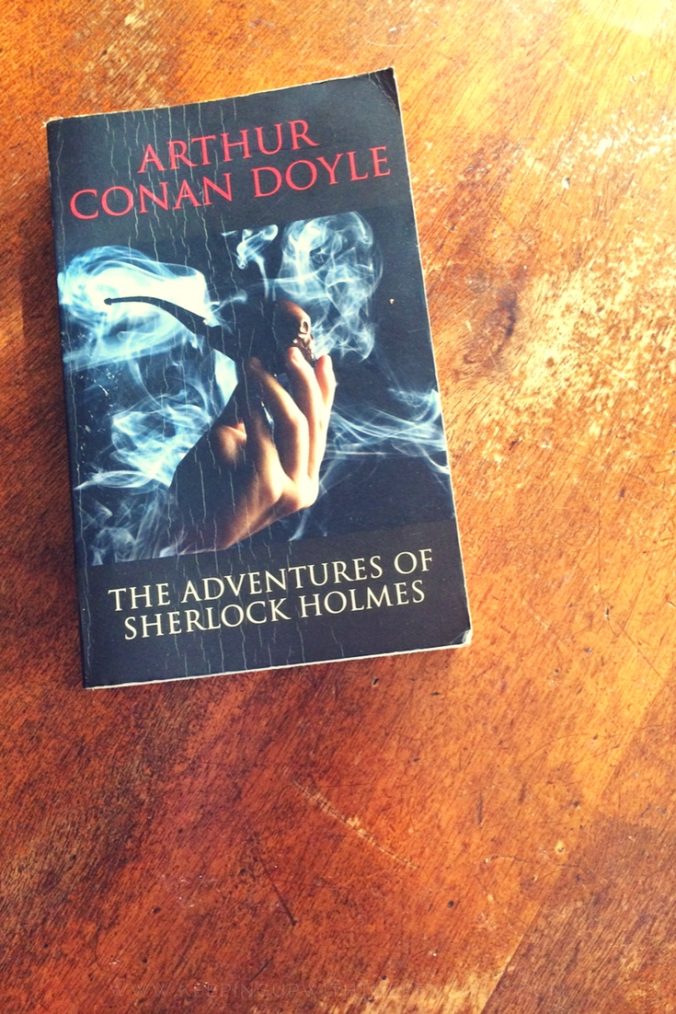 I listen to a lot of podcasts and interviews with authors, and you’d be surprised how many of them say they read The Adventures of Sherlock Holmes as children. So, this week, I figured, if it’s good enough for them…

In the late 19th century, Arthur Conan Doyle was a young doctor, struggling to make ends meet in his Southsea practice. He turned to writing short stories and articles as a way to supplement his income. I literally laughed out loud when I read that in his author bio – he must be the only doctor in the history of the world that upped his hustle with writing as a side gig!

The Adventures of Sherlock Holmes, a collection of short stories, was published serially in The Strand Magazine between July 1891 and June 1892. The stories were so well received that The Strand saw a considerable boost in subscription numbers, and Doyle grabbed the bull by the horns and demanded more money (because none of his other books or stories – nor his medical practice – were making enough to keep him afloat).

Doyle wasn’t actually all that interested in writing his most famous character. His true passion lay with historical fashion, and he lamented that Sherlock Holmes took him away from better things. He didn’t mind the money that came with publishing commercial fiction, of course, and he ultimately published more than sixty Holmes novels and stories to keep that rolling in… but he was really bitter about the fact that there was no demand for any of his other works.

He tried to kill Holmes off in 1893 (a short story called “The Final Problem”), but the public outrage was so great that Doyle was forced to bring him back to life with additional stories from earlier in the timeline. To this day, Doyle’s “serious” writing languishes largely unread, while Sherlock Holmes remains one of the most recognisable fictional characters in the world.

The character of Sherlock Holmes was inspired by one of Doyle’s lecturers at Edinburgh University, a bloke called Joseph Bell who had an eerie talent for spotting details. Still, Doyle owes a true artistic debt to Edgar Allen Poe. Poe was the one who actually invented the classic detective story formula (the prototype being his beloved character C. Auguste Dupin): a super-smart detective with a knack for deduction and leaps of logic, a less-smart (but perhaps more personable) sidekick who narrates the action, and bumbling local officials who never quite get it right. Poe invented all of that, and yet it’s Doyle’s Sherlock that has become synonymous with the fictional detective archetype. Life really isn’t fair…

Like Frankenstein, or Dracula, Sherlock Holmes is one of those characters that defined a genre. Even if you’ve never read an Arthur Conan Doyle story in your life, you probably still know who Sherlock is (and you might have even used the phrase “no shit, Sherlock” a time or two). His influence is so widespread that the character of Sherlock Holmes has been played by no fewer than 70 different actors, across 200 film adaptations – and there are hundreds of TV series, stage productions, audio recordings, and other adaptations beyond that. Some of them also bear the title The Adventures of Sherlock Holmes, but they don’t necessarily follow any of the stories from this collection.

Yes, back to the collection: The Adventures of Sherlock Holmes consists of twelve short stories. They’re quick, easy, fun to read, and – most of all – clever! They’re narrated by Dr Watson, recounting the cases taken on by his buddy Sherlock Holmes: everything from a mysterious newspaper advertisement (“The Red-Headed League”) to the Ku Klux Klan (“The Five Orange Pips”).

Despite being detective fiction, it’s not all doom and gloom! Most of the cases are actually quite whimsical and fun. I think that Sherlock has been misrepresented in a lot of modern-day adaptations – in The Adventures of Sherlock Holmes, he certainly didn’t seem as mean or as brisk as I was expecting. On the whole, this collection is much closer to Scooby Doo than it is to Criminal Minds.

Doyle’s economy of language is incredible, and I loved how Holmes cut across class divides (which, we must remember, were particularly prominent in Victorian England, where the stories are set). Everyone, from poor street beggars and opium users through to noblemen and royalty, comes to Holmes, hat in hand, asking for help. He’s all about justice in an unjust world, and he has little regard for aristocracy and power. Indeed, he takes particular glee in mocking the power structures of the day, and unveiling the incompetence and prejudice of the authorities. Fuck yeah, Sherlock! Fight the power!

Doyle once said that “The Adventures of the Speckled Band” from this collection was his favourite Sherlock Holmes story. I, personally, couldn’t narrow it down to just one – I loved “A Scandal in Bohemia” (featuring the enigmatic Irene Adler), “The Red-Headed League”, and “The Adventure of the Blue Carbuncle”. Ultimately, though, they’re all highly readable, endlessly entertaining, and definitely leave you wanting more. The Adventures of Sherlock Holmes is a highly recommended read here at Keeping Up With The Penguins 😉

Note: I loved The Adventures Of Sherlock Holmes SO MUCH that it made the cut for my shortlist of Classic Books Worth Reading here.

My favourite Amazon reviews of The Adventures of Sherlock Holmes:

How To Remember What You Read