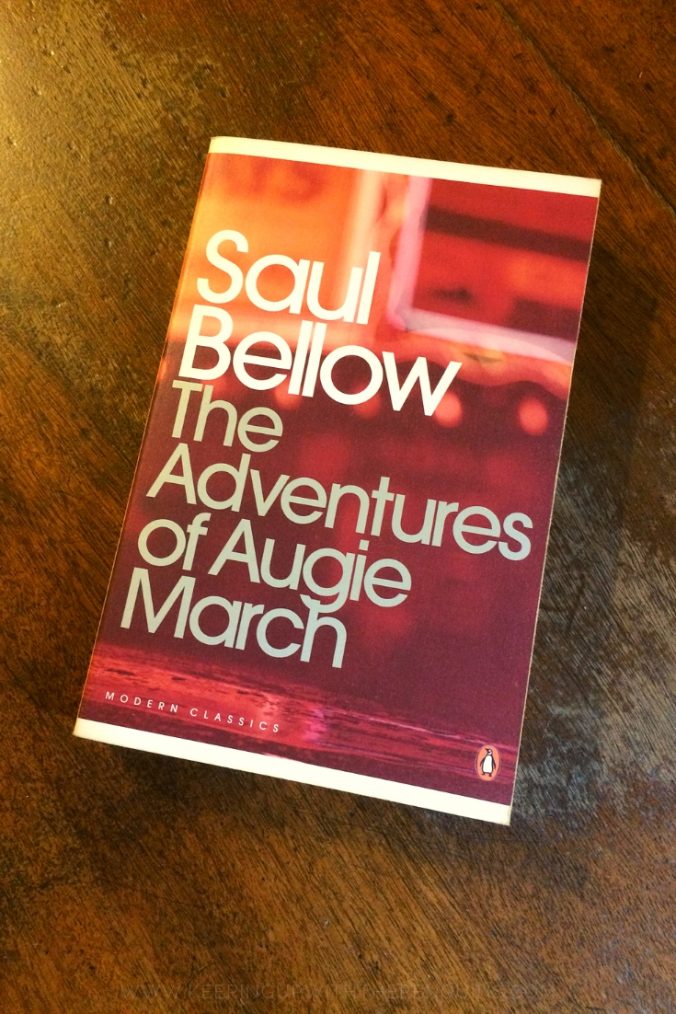 The blurb from Martin Amis on the back of this edition says: “The Adventures Of Augie March is the Great American Novel. Search no further.” That’s a big call, but Amis is by no means the only one to make it. Since its publication in 1953, The Adventures Of Augie March has won the National Book Award for Fiction, it has been named in at least three best-novels-in-English lists (from Time Magazine, the Modern Library, and the Guardian), and Saul Bellow was eventually awarded the Nobel Prize for Literature. The committee cited the “human understanding and subtle analysis of contemporary culture that are combined in his work” – whew! If I hadn’t included this one in my Keeping Up With The Penguins reading list, I would’ve felt like I was missing out.

The continued blurb below the pull-quote from Amis made The Adventures Of Augie March sound like Rudyard Kipling’s Kim meets J.D. Salinger’s The Catcher In The Rye, set in Chicago during the Great Depression. And the comparison titles don’t end there; the introduction to this edition compares it to The Great Gatsby, which immediately got me offside because my dislike of Fitzgerald’s work has only grown over time. (And not to get ahead of myself, but within a few pages I could see that Bellow owed a huge debt to Dickens via David Copperfield, and the influence of The Adventures Of Huckleberry Finn was also abundantly clear. There! I’m done!)

Setting the Gatsby comparison aside, the introduction did give me a few fun facts about Bellow’s back-story and origins (which is why I always read the introduction, even at the risk of spoilers). Bellow was born in Quebec, and his parents smuggled him across the Great Lakes when he was an infant. He didn’t discover that he was an “illegal immigrant” until he signed up for the United States armed forces during the Second World War. I’d imagine that led to a rather awkward conversation at the next Bellow family Christmas!

As much as I enjoyed those insights, I must say I didn’t love this edition. It’s probably the first Penguin book with which I’ve found fault. The print has really tight spacing, with almost no white space on the page, which makes it really tough on the eyes (I’m not old, and I don’t wear glasses, so I feel pretty confident that I wasn’t imagining it). You should know going in that this review must be unavoidably coloured by my frustration with the actually practice of reading Augie’s adventures. As hard as I’ve tried to rise above it, I can’t deny that book design matters, and it will definitely impact a reader’s impression of a story…


So, the story follows Augie March’s teenage years and adulthood, starting with some very humble beginnings in 1920s Chicago. Augie, along with his brothers Simon and George, are raised by their mother and a crotchety boarder who fills a grandmother-type role in their lives. Their father is nowhere to be found, they’re broke as heck, and their mother’s eyesight is slowly failing, so it’s pretty shitty circumstances all ’round. It’s clear from the outset that Augie has very little agency in his own life; he pretty much just lets things happen to him and around him, and he doesn’t do much to push his life in any particular direction.

At one point, he is almost adopted by a wealthy couple who spoil him beyond measure. At another, he resorts to stealing books and re-selling them to make his living. His most unusual and unexpected adventure, by far, was the time he followed a wild and irrepressible young lady, Thea (for whom, it goes without saying, he has a huge boner), down to Mexico and fails in his efforts to help her set up a business catching lizards with a trained eagle. Hard to imagine where it all went wrong, eh? He has a lot of jobs, in a strange variety of fields: a dog groomer, a butler, a shoe salesman, a paint-seller, a coal miner, a union organiser… eventually, he settles into the merchant navy during WWII. And, believe it or not, all of Augie’s adventures are loosely based on Bellow’s own life experiences. What a life he led!

Fair warning: the story gets very heavy and quite graphic about mid-way through, when Augie helps his housemate through a botched back-alley abortion. I haven’t found many other reviews that bring this up, but I feel like those scenes and all their gory detail could be real triggering for some folks. So, bear that in mind!


Anyway, Augie seems pretty happy in the merchant navy, until his boat sinks and he finds himself trapped on a life-raft with a clown called Basteshaw. It’s a long and convoluted passage of the book, written in a quasi-surreal style, before Augie is rescued. Once he’s back on dry land, he returns to Stella – the woman he married before he sailed – and the story concludes with them cobbling together a very dubious existence in France. Augie gets involved in some shady business dealings, and Stella pursues her career as an actress. The end.

Yes, Augie and his women – the course of love runs anything but smooth. None of the ladies are particularly noteworthy: it seems like Bellow just put them in the story to prop up Augie’s development arc, with the exception of Thea. She’s the one that drags him to Mexico, and the only female character with any real backbone or agency. She dumps him when he gets kicked in the head by a horse and loans all his money to another woman (the two incidents are not as unrelated as they may appear, trust me).

It would seem that The Adventures of Augie March was Bellow’s attempt to subvert the tropes of the all-American hero. He gave Augie a fairly standard American hero backstory – comes from humble beginnings, pulls himself up by his bootstraps, sometimes acts outside the law – and he’s got all the typical heroic personality traits, like intelligence and compassion. But Augie never actually acts like a hero! He lets himself get pulled into the plans and schemes of others, and he watches those around him grow more and more successful in their own pursuits, while he just kicks around, jumping from one coattail to another. The critics have said that Bellow was Making A Point(TM): that intelligence and goodwill are of no value if their possessor has no self-awareness and no clear goal. It’s a good point, and it’s well made in the sense that the reader desperately wants Augie to get his shit together and is constantly frustrated in that desire. I’d say he’s probably one of the most annoying characters I’ve ever read, in that regard.


It’s a deeply American novel in that it’s all about the pursuit of happiness. Bellow explores a lot of extremes: alienation and belonging, poverty and wealth, disadvantage and privilege, failure and triumph. His influence on subsequent writers – Cormac McCarthy, Joseph Heller, Jonathan Safran Foer, and the OP fanboy Martin Amis – is clear.

All that said, I found The Adventures Of Augie March a real slog to read. I think that was partly due to the book’s design, as I said, and having to persist with it for so long (over six hundred pages of tiny text! gah!). But, mostly, I think it was the fact that I just couldn’t invest in it emotionally. The characters I cared about and enjoyed reading – for instance, Mimi, the victim of the botched abortion – were all bit-players. I could have happily put this one down mid-way through, never picked it up again, and lived a long happy life not knowing or caring what happened to Augie March. It’s a strange outcome, given that I loved so many of those comparison titles I listed at the beginning. The Adventures Of Augie March wasn’t particularly obtuse or pretentious, two elements of literature that really bug me, so on paper I should have really loved it… I just didn’t! I persisted ’til the end, just so I could bring you this review in good conscience. You’re welcome.

My favourite Amazon reviews of The Adventures Of Augie March:

Island On The Edge Of The World – Deborah Rodriguez