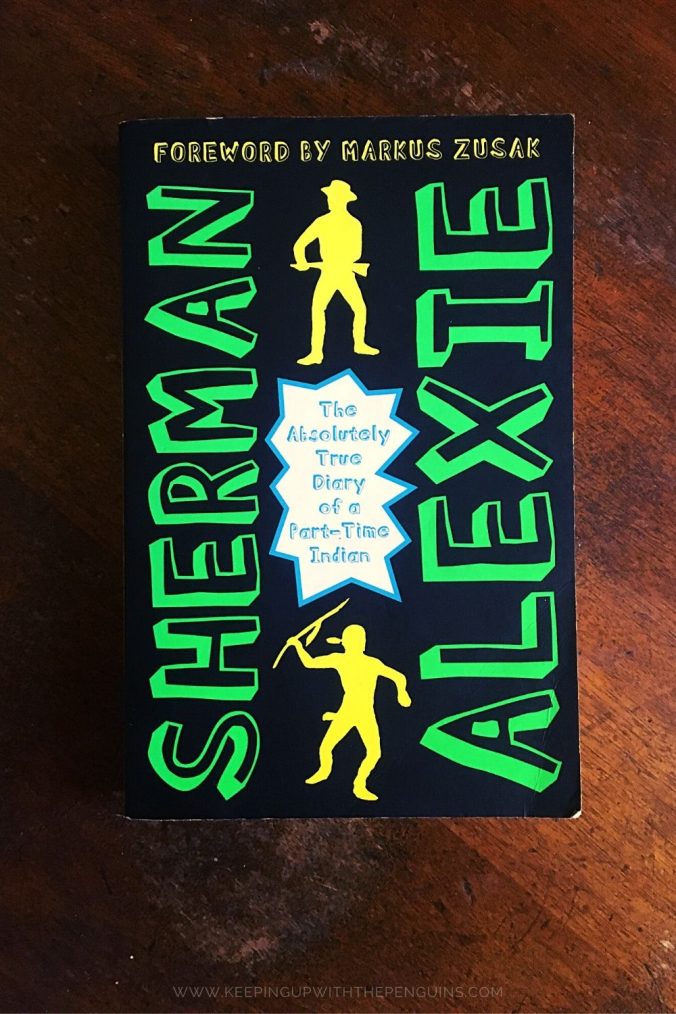 The Absolutely True Diary Of A Part-Time Indian – Sherman Alexie

Junior (aka Arnold Spirit) is a budding cartoonist-slash-basketball player who has lived on the Spokane Indian Reservation for all fourteen years of his life (so far). In The Absolutely True Diary Of A Part-Time Indian, he describes the series of circumstances that led up to him deciding to transfer to the all-white high-school miles away, instead of the Indian high-school closer to home, and what that means for his life and his loved ones.

Junior was “born with water on the brain” (the way his family has always described his condition, known to most of us as hydrocephalus). He wasn’t expected to survive the emergency surgery to drain it, but he did. He now lives with several physical disabilities, which have been compounded over time by his limited access to healthcare. Though he mentions his disabilities from time to time, they’re not a major part of his story. That’s the first check in The Absolutely True Diary Of A Part-Time Indian‘s column – how often do you read a story about a character who lives with a disability but isn’t defined by that disability?

He tells his story diary-style (accompanied by fantastic illustrations, in real-life contributed by Ellen Forney). He describes his home life (troubled), his friendship with Rowdy (dysfunctional), and his confusion about the way the world works, and his role in it.

When Junior decides to attend the all-white high-school 22 miles away, his community is split. His family – though poor and unreliable – support him the best they can. Rowdy, however, is enraged, and the schism that appears between him and Junior is the major conflict throughout the course of The Absolutely True Diary Of A Part-Time Indian. They have very little contact once Junior transfers, only really seeing one another on the basketball court (an already-fraught situation, given that poor Junior has to play against his former schoolmates in his new team’s colours – yes, symbolism, etc.).

Junior has a lot of insight into racial injustice and poverty for a fourteen-year-old, but given his life circumstances, it’s completely believable. Over the course of the year depicted in his diary, he suffers a lot of personal tragedies – many related to alcohol abuse. You might think that would make The Absolutely True Diary Of A Part-Time Indian a real bummer, or at least yet-another grim perspective on the problems faced by non-white communities, but Alexie (via Junior) is careful to keep the tone frank and hopeful. Even when things are demonstrably shit, Junior makes a point of noting the silver linings.

Speaking of Alexie: The Absolutely True Diary Of A Part-Time Indian is famously semi-autobiographical. Like Junior, Alexie was born with hydrocephalus and grew up on the Spokane Reservation in Wellpinit, raised by and around people with severe alcohol addiction. The story actually started out as a memoir, but Alexie’s editor convinced him to make it a young adult novel. He has since said: “If I were to guess at the percentage, it would be about seventy-eight percent true.”

And here’s how you know The Absolutely True Diary Of A Part-Time Indian is good: heaps of people want it banned. Seriously, it’s up there with The Satanic Verses for controversy. It was the most-frequently banned and challenged book in the United States from 2010-2019, and has appeared in the top-ten list of banned and challenged books almost every year since then. And boy, do its critics have a laundry list of complaints: offensive language, cultural insensitivity, “anti-family” content, “anti-Christian” content, depiction of bullying, depiction of gambling, depiction of racism, depiction of violence, sexual references, references to drugs and alcohol… I could go on. Basically, there’s nothing in this book that the wowsers didn’t take issue with EXCEPT the one thing I think ACTUALLY warrants it: big-time trigger warning for dog death in Chapter 2!

It’d be nice to leave it there, but unfortunately, there’s a really big issue that has to be addressed in any conversation about The Absolutely True Diary Of A Part-Time Indian: the #MeToo allegations raised against Sherman Alexie in 2018. Ten different women reported inappropriate and harmful behaviour perpetrated by Alexie: sexual harassment, unwanted sexual advances, and other forms of relational mistreatment. They alleged that Alexie traded on his power in the literary scene to lure women and silence them. As a result, several organisations and institutions removed Alexie’s name from awards and other honours, and the young adult literature community generally stepped back from the golden boy.

Alexie released a written statement acknowledging that he “has harmed” others, and that “there are women telling the truth”, with a partial apology. I’ve read and re-read the statement, and I’m afraid what sticks with me more than his apparent expression of regret is his determined efforts to discount and discredit the woman who first raised the allegations publicly, Litsa Dremousis.

So, unfortunately, we have another great book with wide appeal written by a man who turns out to be a bit of a shit. It’s a real shame how often this happens. The Absolutely True Diary Of A Part-Time Indian was a good young-adult read, but art does not and cannot exist in a vacuum.

My favourite Amazon reviews of The Absolutely True Diary Of A Part-Time Indian:

Should We Still Read Books By Cancelled Authors?