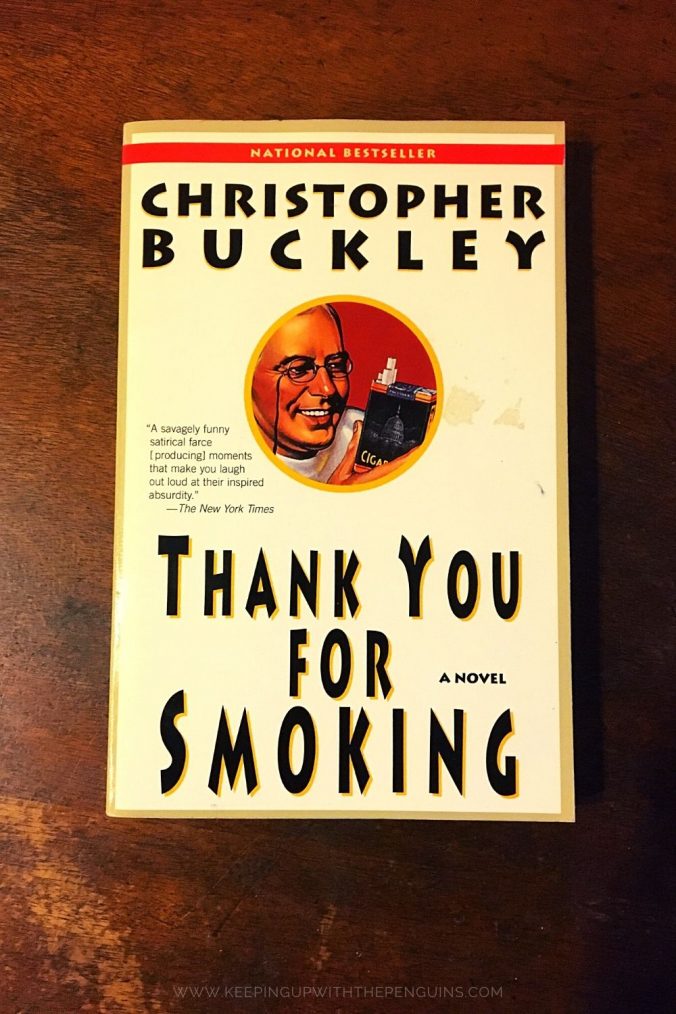 Thank You For Smoking – Christopher Buckley

One of my favourite movies of all time is Thank You For Smoking (2005). It follows Nick Naylor, chief spokesperson for a major tobacco lobby, as he tries to convince the world that cigarettes won’t kill you (or, if they do, at least you’ll die with liberty). The thing is, I didn’t even realise it was a book, the 1994 novel Thank You For Smoking, until I scored this copy for $4.99 in a remainder book shop while I was waiting for a train. How basic of me!

Cards on the table: I’ve had an on-again-off-again relationship with cigarettes for too many years. At the time of reading Thank You For Smoking, it was (mostly) off, and I was hoping this would be the book to help me kick the cancer sticks for good. It’s basically the anti-West Wing: a biting satirical caricature of Washington politics, corporate greed, media spin, and Hollywood bullshit.

The opening line sets the tone:

“Nick Naylor had been called many things since becoming chief spokesman for the Academy of Tobacco Studies, but until now no one had actually compared him to Satan.”

Thank You For Smoking (Page 3)

As in the movie, Nick is a cigarette company flack, and a pretty damn good one (despite his boss’s suspicions otherwise). He’s a scoundrel, through and through, out for chicks and cash and cigarettes – usually in that order, but not always. His offices are just a few blocks from the White House, and he glad-hands with all the bigwigs in town (when he’s not being flown cross-country in his boss’s private jet). He loves his job, and he’ll defend cigarettes passionately to anyone who’ll listen, but deep down he knows he’s only doing it to pay the mortgage. That’s how he sleeps at night.

The supporting players are Nick’s M.O.D. Squad, the friends-cum-support-group whose self-designated moniker stands for Merchants Of Death. Together, they represent the tobacco, alcohol, and firearms industries, and more than one argument breaks out over whose product is the most deadly. All of the lobby groups in Thank You For Smoking have knee-slappingly ironic names and acronyms: the Moderation Council for booze, the Society For The Humane Treatment of Calves for veal, and so on.

Nick’s opposition are the congressmen (the very few of them not on the take) and public health advocates who hold him – and Big Tobacco, by extension – responsible for 1,200 deaths a day. They’ve got righteousness on their side, but it’s no match for Nick’s quick wit and doublespeak. In fact, Nick is so effective in his role that he becomes the target of anti-tobacco terrorists, who paper him with nicotine patches in a showy effort to bump him off. Nick survives, but he’s left with a terrible and apparently life-long distaste for cigarettes – a significant handicap in his line of work. Plus, the FBI suspects that he faked the whole thing to garner sympathy.

Despite his provocative rhetoric on Oprah, Nick knows he’s just plugging holes. The tide is turning against cigarettes. His boss, ever-skeptical of Nick’s media strategy, intimates that he’s one strike away from getting the sack – and that’s before he realises Nick is sleeping with an attractive young reporter who has promised him a favourable profile. Nick’s Hail Mary offering is to fly to Los Angeles and make a deal that would see movie stars smoking on the big screen (and not just the villains and the crazies). After all, product placement works for beer and popcorn, why not cigarettes?

Yes, Thank You For Smoking is funny and fast-paced and just a little farcical. It’s a thoroughly entertaining read. The thing is, reading it reaffirmed all the arguments I’ve ever heard in favour of – not quitting smoking, don’t be ridiculous – not watching the movie before you’ve read the book (or, at least, not reading the book of a movie you’ve enjoyed). I just kept picturing scenes from the (remarkably faithful, it must be said) movie version the whole way through. The laughs just weren’t quite as hearty coming from the page. Thank You For Smoking is a book I probably would have loved-loved-loved otherwise. As it stands, it was just pretty good. I’d recommend it for anyone who has a taste for political satire and a dark sense of humour.

My favourite Amazon reviews of Thank You For Smoking:

7 Books That Are Dark But Funny