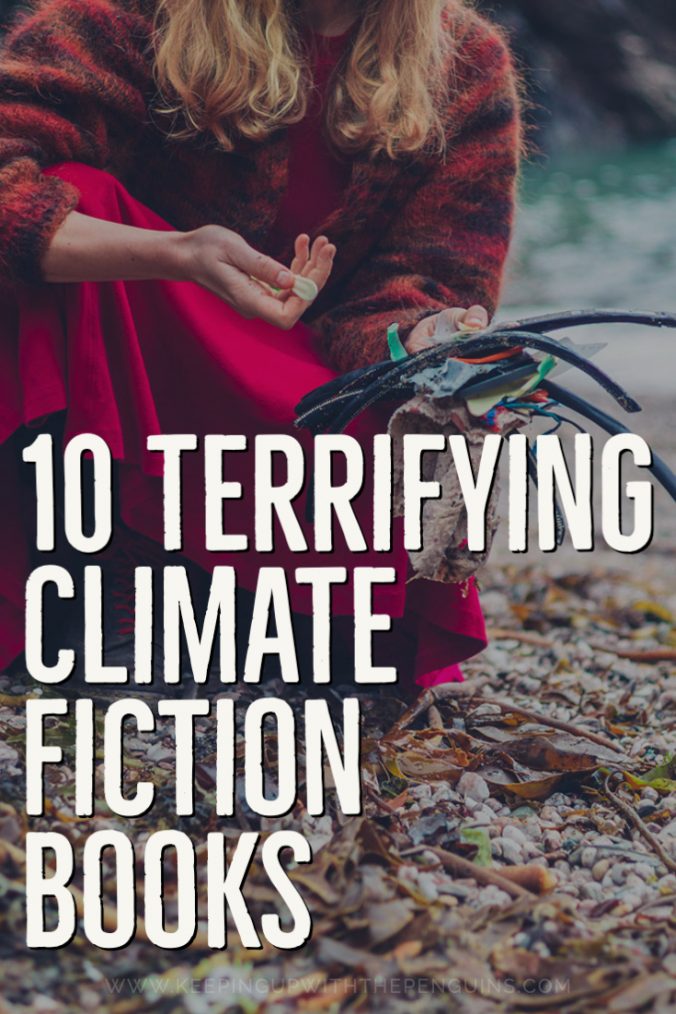 I don’t know if you’ve noticed, but the climate’s getting kind of hinky. There’s been once-in-a-millennium floods in Australia. Bird populations in Panama have plummeted. Microplastics have been found in human blood, for the first time. The latest IPCC report says we’re on the fast track to climate disaster. And that’s all in the past month! If you’re not getting enough existential dread from the real news, here’s a list of ten terrifying climate fiction books that paint a grim picture.

The Overstory by Richard Powell

To start off with one of the more positive climate fiction books: Richard Powell’s 2019 Pulitzer Prize winner, The Overstory, illuminates the hidden life of trees. The story “unfolds in concentric rings of interlocking fables that range from antebellum New York to the late twentieth-century Timber Wars of the Pacific Northwest and beyond”. Many other authors have personified trees or otherwise honoured them in fiction, but Powell doesn’t rely on fantasy to endear us to these essential pillars of our ecosystem. You’ll never look at the trees bordering your yard or local park the same way again.

The Wall by John Lanchester

In the event of a major climate disaster, surely an island nation wouldn’t build a huge concrete barrier around its borders… right? Well, in The Wall, that’s exactly what happens. The wall keeps out the refugees fleeing the ruins of their homes and lives. Many of the basic amenities of modern life have been lost in the Change, but at least the Wall gives residents an illusion of safety and control. The story in this climate fiction novel focuses specifically on Joseph Kavanagh, a new Defender who must protect his section of the Wall – a precarious job, to say the list. It’s been billed as “1984 for our times”.

The Last Migration by Charlotte McConaghy

The Last Migration (also called Migrations in some regions) is the story of an impossible journey that’s all too close to reality. Franny Stone is following the last flock of Arctic terns on their migration to Antarctica. She talks her way onto a fishing boat (there aren’t many left, with fish stocks depleted beyond repair) that will take her south, through crashing Atlantic swells to the bottom of the world. Naturally, Franny must face up to more than the challenges of a climate changed; she must wrangle with her own internal wilderness as well.

Even though The Grapes Of Wrath was written long before anthropogenic climate change was widely acknowledged, reading it in the 21st century I was struck by how timely it seemed. This story of a migrant family pulling themselves up out of the Dust Bowl during the Great Depression seems eerily relevant and poignant today. A work of climate fiction way ahead of the game! The drought has destroyed the Joads’ crops, the bank has foreclosed on their farm, and they’re forced to seek new lives and funds elsewhere. When they arrive in the promised land, California, the work is nothing like they’d imagined, and their circumstances go from bad to worse. Read my full review of The Grapes Of Wrath here.

Weather is a “darkly funny and urgent” climate fiction book about a family and a nation in crisis. Lizzie was once a promising graduate student; now she answers fanmail for a podcaster (his show being called, appropriately, Hell and High Water). She tries to inject hope and optimism in her responses, but it’s getting harder every day. Her interest in works devolves into an obsession with the psychology of preppers, and her intense focus draws her away from her family obligations. How can we convince ourselves that everything will be okay when the world’s on fire?

The Disaster Tourist by Yun Ko-eun

Yona is really good at her job, selling holidays to dream tourist destinations that have been ravaged by climate change disasters, until her snake of a colleague lands her in hot water. Faced with the prospect of losing her job altogether, she takes on a new assignment: take a vacation herself to the company’s least profitable destination, and see what can be done to beef it up a little. Would a company really go so far as to manufacture a disaster to turn a profit? The Disaster Tourist is “an eco-thriller with a fierce feminist sensibility”, merging climate fiction with #MeToo commentary and corporate espionage.

We all know the sea levels are rising, but what if they receded instead? In Dyschronia, a young girl has the blessing/curse of splitting migraines that give her glimpses of the future, and she sees this very topsy-turvy consequence of climate exploitation come to pass. The change leaves a desolate landscape of soggy sand and decomposing marine life, hardly conducive to the establishment of a planned seaside resort. The residents of the small town are furious that the young oracle didn’t warn them what was coming, but that doesn’t stop them relying on her to bankroll their rescue. Read my full review of Dyschronia here.

Cormac McCarthy’s The Road is a lot of things, and one of them is a terrifying climate fiction novel. If you can look past the nameless father and son, “each the other’s world entire”, you’ll see that they’re travelling through a landscape ravaged, sparse and laid to waste. “Nothing moves in the ravaged landscape save the ash on the wind. It is cold enough to crack stones, and when the snow falls it is gray. The sky is dark.” McCarthy doesn’t fill in many of the gaps, but it’s not hard to imagine that this bleak future is the result of a horrific climate apocalypse.

The Island Will Sink by Briohny Doyle

What if climate change brought us to the brink… and capitalism swept in to save the day? That’s (kind of) the background of Briohny Doyle’s debut novel, The Island Will Sink. Environmental disasters are now packaged and sold as entertainment. Viral marketing has cartoon pandas encouraging kids to fink on their parents for energy crimes. Living through it is cinematographer Max Galleon, a man with amnesia who relies on his own curated image archive to remember what has happened to him. When we see everything through a screen, what might we miss?

Watership Down by Richard Adams

Richard Adams claims that he had nothing in mind when he wrote Watership Down except a simple children’s story about bunnies… but come on! First, they have to flee their home warren because the humans are going to pave paradise to put up a parking lot. Then, they encounter a creepy rabbit cult, which the humans use for food. Their attempts to ind a location for a new warren are thwarted at every turn by various environmental calamities. You barely have to look between the lines to read the sub-text of this one. Read my full review of Watership Down here.