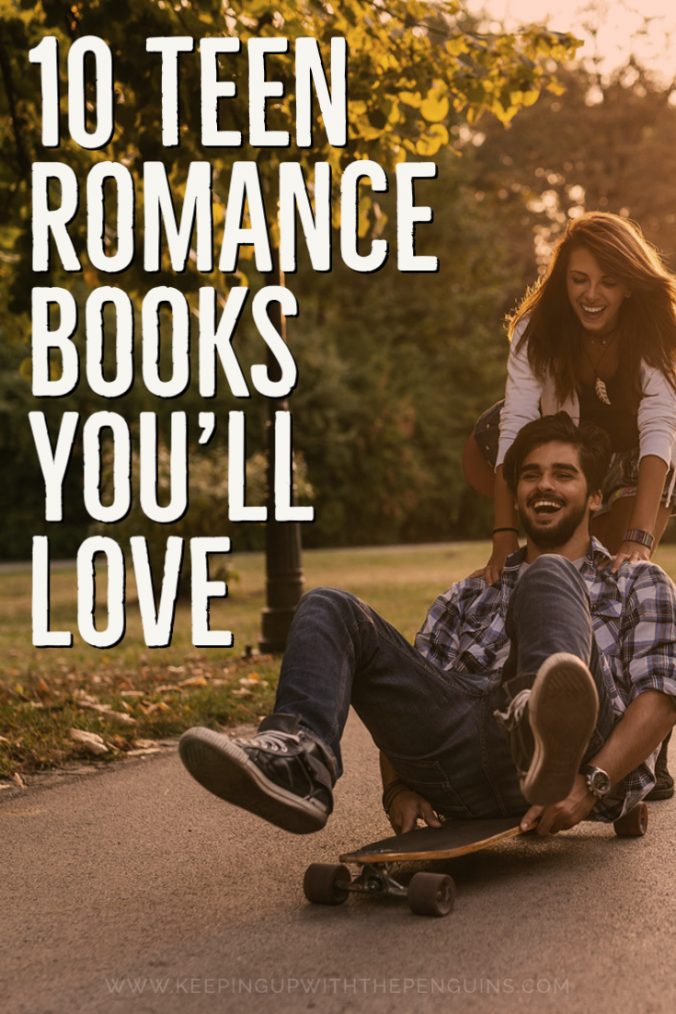 This time of year is all about L-O-V-E. Whether you’re coupled up or enjoying your own company, or any of the other variations of human relationships that can be cherished, you’ll find it hard to avoid the capitalist siren song of pink hearts and chocolates and cards. Even the most hardened cynic (I should know, I’m one of ’em!) can be forgiven for finding themselves tempted by something gooey. Here are ten teen romance books that will throw you back into the heady days of youthful passion.

Penny Lee is ready to leave her alarmingly average life behind. When Emergency Contact begins, she’s skipping across country to study writing, and she’s ready for her real life to begin. She collides with Sam – an aspiring movie director with seventeen dollars in his bank account, currently sleeping on a mattress on the store room floor of the cafe where he works. Their in-person interaction is awkward to say the least, but they exchange numbers – and find they can connect digitally in a way they never have with anyone ever before. This contemporary teen romance has new resonance in the pandemic era, where so many of our interactions take place on a screen.

To All The Boys I’ve Loved Before by Jenny Han

Delightful teen romance books don’t usually have such a spine-chilling premise! In To All The Boys I’ve Loved Before, Lara Jean has written a letter to every boy she’s ever loved (five total), letters that were supposed to be for her eyes only… until one day, under mysterious circumstances, the letters are mailed to the boys in question. It’s every teen girl’s worst nightmare; even now, slightly (ahem!) past my teenage years, I shudder at the thought. But don’t let that put you off! This is a heart-warming fun and funny story for readers of all ages (plus, there are two sequels if one just ain’t enough!). Read my full review of To All The Boys I’ve Loved Before here.

You would naturally expect to see The Fault In Our Stars on a list of teen romance books, but let me direct your attention to a better (if lesser known) story of love and failing health: Five Feet Apart. Stella Grant is waiting on a lung transplant. For someone who likes to be in control, it’s an untenable situation – all she can do is follow the rules to the letter, and hope. Meanwhile, Will Newman is desperate to leave the hospital. He’s sick of rules and treatments; he just wants to unplug and see the world. For Stella and Grant, coming in close contact – any closer than six feet – could put Stella’s lung transplant in jeopardy, could put Will’s life at risk. Is it worth it for love? Could the difference between five feet and six really change everything?

Simon vs The Homo Sapiens Agenda by Becky Albertalli

Simon is your average teenage kid. His family and friends are wonderful progressive people, but he’s still hesitant to come out – he’s not sure he’s ready. He’s got school, he’s got hobbies… and he’s also got a secret, a love affair carried out via email with another anonymous gay kid from his class. Simon Vs. The Homo Sapiens Agenda is one of the best teenage romance books of recent years, one that will take you (gay or straight) right back to the heady intoxication of first love. You’ll be on the edge of your seat all the way through: will Simon come out? Who is his secret love? It’s romantic, it’s touching, and it’ll make you crave Oreos!

Pepper is an over-achiever – or, she would be, if it wasn’t all about to fall apart at the seams. She’s single-handedly making sure her family’s fast food chain keeps booming, by leveraging their massive Twitter account. Jack annoys the hell out of her: a class clown who has a love/hate relationship with his own family’s small deli. When Pepper’s chain (allegedly!) steals Jack’s secret family recipe for grilled cheese, it sparks an all-out Twitter feud (thus, this teenage romance book’s title: Tweet Cute – isn’t that adorable?). Snarky memes and sharp retorts fill their timelines, but there might be something more than corporate espionage at play. All’s fair in love and cheese, after all!

They Both Die At The End by Adam Silvera

Teen romance books don’t often spoil the ending in the title, but that’s what makes They Both Die At The End unique. Death is one of the universal constants, right up there with taxes, and all teen romance books will end that way – on page or off. Adam Silvera puts the immutable truth to the test with this story of two people united by the shared date of their mortality. Mateo and Rufus are strangers, but the app tells them that they’re both due to die on the same day. They have a whole life to live together, and just one day in which to do it.

If you’re at the upper end of the young adult age bracket (or a bit past it – ahem!), you’ll really enjoy one of the most popular teen romance books on #bookstagram: Red, White And Royal Blue. Casey McQuiston takes the fake dating trope and ups the stakes considerably. Alex Claremont-Diaz becomes America’s First Son when his mother wins a seat in the White House, which would be great… except for an unfortunate falling out with Henry, the Prince Of Wales from across the pond. Their respective roles make the otherwise harmless altercation a potential diplomatic crisis. The media managers and P.R. spokespeople devise a plan for a public truce, but Alex and Henry’s false show of friendship quickly turns into something more. It’s steamy AND political – what better combination? Read my full review of Red, White & Royal Blue here.

If you like your teen romance books with a heaping serve of girl-power and inspirational self-love, Dumplin’ is just what you’re after. This feelgood young adult novel follows Willowdean Dixon – nicknamed Dumplin’ by her former-beauty-queen mother – as she lines up to compete in her small-town beauty pageant. Will has always had the kind of confidence that other women envy, but it’s shaken to the core when she develops a crush on private-school heart-throb Bo – and he seems to like her back. Entering the Miss Clover City pageant (where she’ll compete against a cast of other unlikely types) might be just the ticket to get her back to feeling herself again.

It would be nice to say that Michael meets Mina under unusual circumstances… but, unfortunately, in today’s day and age, the inciting incident of When Michael Met Mina is all too common. Two kids attend a refugee rally: Michael with his parents, founders of the anti-immigrant “Aussie Values” political party, and Mina with her mother, with whom she escaped Afghanistan on a leaky boat and survived the terrors of a detention facility. They’re on opposite sides of the divide, but their lives crash together – and love blooms – when Mina gets a scholarship placement at Michael’s school. Teen romance books are wonderful at tackling the tough issues, and they don’t come tougher than this!