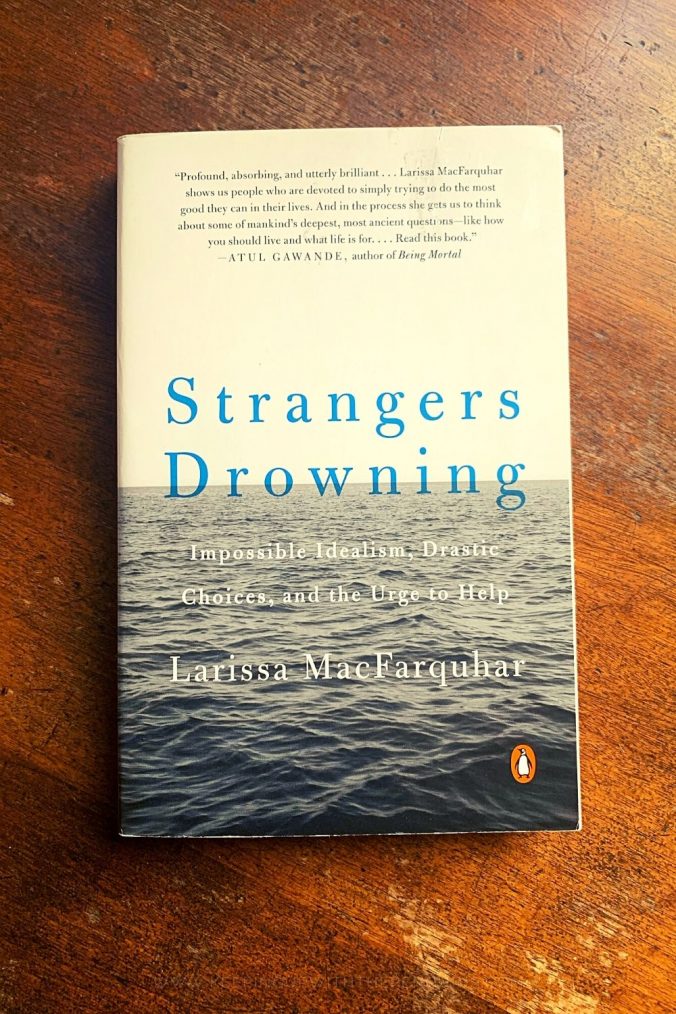 The subtitle of Strangers Drowning is “Grappling with impossible idealism, drastic choices, and the overpowering urge to help”. You might be picturing firefighters rescuing kids from wells or kittens from trees, but that’s not what Larissa MacFarquhar is talking about in this philosophy book. Rather, she’s looking at a less sexy type of altruism, people who dedicate their whole entire lives to bettering the lives of others, even at great personal cost.

So, what does a life of extreme ethical commitment look like? These aren’t one-off heroes doing something spectacular, like raising a floppity-gillion dollars for a cause with a rock’n’roll concert. These are people whose commitment to the cause overtakes their entire lives, often very quietly and with little public acknowledgement. They’re the ones who make us think “huh, maybe I should be giving more to charity”.

I started writing this book because I was troubled by something I didn’t understand: why don’t most of us give more than we do?

These “do gooders” (MacFarquhar’s moniker, not mine) offer up kidneys for complete strangers, live on scraps so they can donate all of their income, adopt dozens of children. They’re the kind of people who, on paper, do completely incredible things but, in real life, they kind of freak us out.

That’s the other aspect of Strangers Drowning. MacFarquhar doesn’t just present case studies, “look at how great these people are” – she also interrogates our society’s deep-seated suspicion of do-gooders and why exactly they make us feel so uncomfortable.

It’s a series of confronting questions that we don’t often have cause to think about consciously. How much should we give? How do we decide who deserves it? If we give away all of our money, or risk life and limb to help others on a daily basis, does that mean we value the lives of strangers more than our own? Or the well-being of our families? Is it right to value strangers more (or, at least, as much) as our flesh and blood?

This is the trolley problem played out in real life. A primer for those of us who haven’t seen The Good Place: the trolley problem is an ethical dilemma used in intro-to-philosophy courses to make us think about whether it’s ‘good’ to sacrifice one to save the many. Do the ends justify the means, etc. Everyone that MacFarquhar writes about in Strangers Drowning has decided, definitively, that it is.

Strangers Drowning is not, however, a glowing recommendation of lives of boundless optimism. MacFarquhar highlights the downsides and disappointments of these extremely ethical lives. There’s ostracism from community, estrangement from family, destitution, desolation – not to mention frequent personal endangerment. And there’s the kind-of obvious point that she skirts around, that ultimately these people might not make much of a difference (in fact, some of them might inadvertently do more harm than good).

Interestingly, MacFarquhar doesn’t really present an opinion of her own, at least not in explicit terms. She’s an entirely objective observer in Strangers Drowning, describing the good and the bad without proffering any judgement. She never reveals whether she donates to a charity or how much, or whether she’s ever been the recipient of charity of the kind she describes.

It’s a confronting and challenging read, especially if you’re prone to philosophical debates in your own mind. It’s important to allow time to read Strangers Drowning gradually, and take breaks to think over what you’ve read before continuing.

Ultimately, the question(s) MacFarquhar keeps coming back around to is this: how much can we help, and how much should we help? Of course, there is no satisfactory answer (so, if that’s what you’re after, move along), but the various examples of people doing more than most give a lot of food for thought. Fans of The Good Place, and anyone ever crippled by indecision when faced with a ‘please donate now’ email or door-knock, should definitely give this one a read.