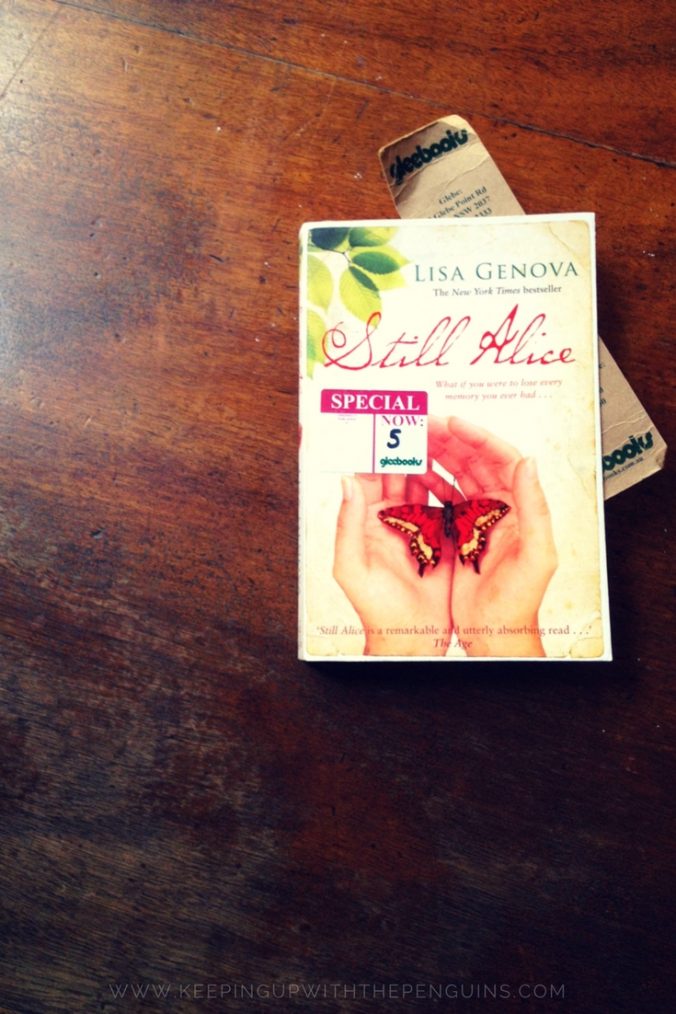 You know what? We’ve been buried in the classics for a while – let’s jump forward to a contemporary New York Times bestseller. Still Alice by Lisa Genova was another great bargain bin find ($5!). I must say, the review excerpt from Australian Women’s Weekly on the cover was almost enough to give me pause, but I bit the bullet.

Lisa Genova self-published Still Alice back in 2007. She had tried for years to get an agent or a publisher interested in the novel, but went on to have great success off the sweat of her own brow. It’s one of those Cinderella publishing stories that struggling, neurotic writers hold close to their hearts late at night, when the demons come…

The language and rhythm of Still Alice was a big shift from Moby Dick, and it took me a minute to re-orient my dish. However, much like The Book Thief, despite the really heavy content the book is actually very digestible. I powered through it in less than 24 hours.

Still Alice focuses on the onset of dementia, specifically Early Onset Alzheimer’s Disease. Alice (the protagonist, duh) begins experiencing symptoms, and the story follows her diagnosis and mental disintegration as the disease advances. I was initially kind of disappointed to find that it wasn’t written in the first person – I thought that would have been a really cool and interesting technique given the subject. I came to eat my words, though. The limited-third person narrator still captures Alice’s internal world, but that coupled with the objective perspective on her symptoms (we see her repeating herself in the dialogue, acting in ways that clearly demonstrate she’s forgotten what she’s supposed to be doing, etc.) is really jarring in an oddly delightful way.

I did notice as I sped through that some of the editing is a bit rubbish (which is unsurprising for self-published work), but I can still understand how it made the Dymocks 101. It isn’t a timeless classic, or a work of art, but it’s an interesting story rooted in heart-wrenching subject matter, and it’s told in a very engaging way.

It’s clear that Genova has Done A Lot Of Research, and she wants you to know it. She uses all the proper scientific words and everything. There’s a massive acknowledgements section (at the beginning of the book, no less, so you can’t overlook it) with the names of lots of doctors and scientists. But the family relationships are clearly the central focus on the story.

We delve deeply into Alice’s terror on behalf of her children (the genetic mutation that caused her Alzheimer’s is genetic), and her ongoing difficulty managing her husband’s emotional reaction to her diagnosis, while simultaneously trying to navigate her early symptoms.

Much is also made of Alice’s youth, which is a point of difference to other Alzheimer’s narratives; Alice is in her 50s, still working and running and living a full life, setting her far apart from the stereotype of an 80-something nursing home resident becoming more forgetful and clumsy.

Genova has worked really hard to give the reader a special-access pass behind the scenes of what is unfortunately an all-too-familiar set of circumstances. She makes a point of privileging the perspective of the patient, rather than the caregiver. In subsequent interviews, Genova talked about this a lot; she notes, sadly, that almost all of our existing stories about dementia are caregiver-centric. Personally, one of my pet peeves is medical professionals and family members talking about a person with dementia as though they’re not in the room, so Genova’s focus on avoiding that really got me on side. As a result, Still Alice is honest and provoking, without being preachy.

I did have a bit of a teary moment towards the end, but not when you’d expect! Alice’s attempt to execute her own suicide plan, and her inability to recognise her newly-born grandchildren, didn’t touch me in the slightest. It was her final student writing down his words of gratitude for her, so that she could re-read them every day when she inevitably forgot how much she meant to him, that got me in the end. Turns out I’m not made out of stone, who knew? 😉

I find it really hard to criticise Genova, and Still Alice: not because the book is so brilliant that it wouldn’t warrant criticism, but because basically every review out there hammers home the same perceived shortcomings. They talk about the limited access to the caregivers’ perspective, and the repetition of scenes – but I think it’s those same “shortcomings” that were the most valuable and deliberate parts of the book, they set it apart from others on this subject.

If I’m being brutally honest, I’ll tell you again that the writing and editing isn’t great, but hell, it was Genova’s first go and she did it all on her own without a publishing house dumping a truckload of money and resources on her doorstep. Given all of that, it’s a perfectly fine book.

I’m probably not going to read it again, but I might give it to my Mum or something, and I would definitely want to shake Genova’s hand if I ran into her in a cafe.

Looking for more tear-jerkers? Check out my full list of books guaranteed to make you ugly cry here.

Who’s a Good Boy?: The Best Animals in Literature

What Book Makes You Ugly Cry?