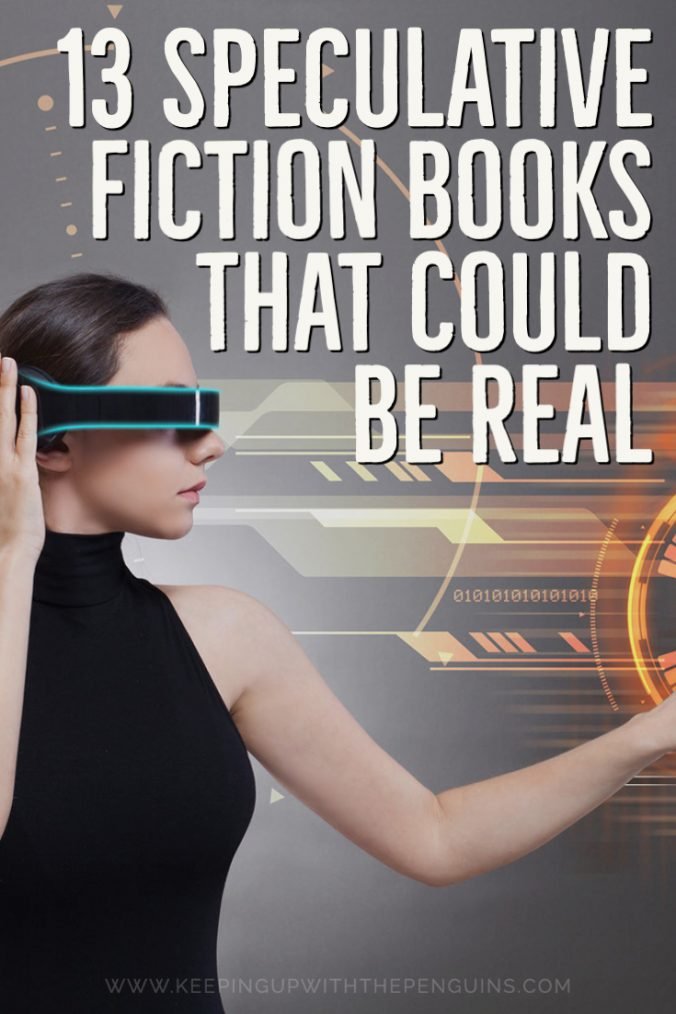 13 Speculative Fiction Books That Could Be Real

I don’t know if you’ve heard, but we’re living in unprecedented times. It seems like every day, we wake up and turn on the news to find out some new and horrifying way in which our world has become a bit more dystopian overnight. If you live with your nose buried in a book, like I do, sometimes these turns of events feel eerily familiar. Here are thirteen speculative fiction books that could be real – they’re not far enough beyond the pale at all!

Margaret Atwood has famously, openly, said that she included nothing in The Handmaid’s Tale that hasn’t already happened – that isn’t already happening – to women and girls somewhere in the world. That’s what makes it particularly offensive when people say things like “suddenly, we’re living in Gilead” – we’ve always been living in Gilead, it just hasn’t always been immediately obvious to people it doesn’t impact. Farming fertile women for children, severe partriarchal restrictions on women’s participation in society, ritualised rape, it all happens and it is all happening. This is one of those speculative fiction books you wish wasn’t real. Read my full review of The Handmaid’s Tale here.

The spookiest thing about the alternative reality imagined in Kazuo Ishiguro’s Never Let Me Go is that it’s so damn similar to the actual reality we live in today! The children of Hailsham boarding school seem (almost) totally normal. They squabble, they make drama, they explore their burgeoning interest in sex and romance… but their lives are already set on a very specific trajectory, one that they have no hope of changing, and one that none of us would ever choose for ourselves. I can’t say any more without totally spoiling it, but trust me, this is one of the speculative fiction books that feels very real. Read my full review of Never Let Me Go here.

Okay, fine, not every speculative fiction story in Her Body And Other Parties could be real. (Well, let’s just hope that no real woman actually keeps her head tied on with a green ribbon until her husband pressures her to untie it, anyway.) The one that really presses on a raw nerve, though, is Inventory. What looks like a simple list of a woman’s lovers turns out to be set in a dystopian world where a virus is killing off the population in swathes. You might think I’ve spoiled it for you now, but I swear I haven’t: it would take a lot more than a single review to ruin all of the surprises that Machado has in store for you. Read my full review of Her Body And Other Parties here.

The Natural Way Of Things by Charlotte Wood

One of the more eerily prescient speculative fiction books that could be real is The Natural Way Of Things. The year before the #MeToo movement exploded and toppled the bastions of corporate misogyny, Charlotte Wood published a book examining that very theme. In her alternate reality, ten women are drugged and abducted, and they wake up on a sheep farm in the Australian outback. They find they have just one thing in common: each and every one of them has been involved in a “sex scandal” with a rich and powerful man. This is a creepy story that has far too many parallels to the treatment of survivors in real life.

Tender Is The Flesh by Agustina Bazterrica

In Augustina Bazterrica’s alternative reality, a virus has ripped through the entire animal population, wild and domestic, making all meat entirely poisonous to humans (eerily pertinent, no?). Companies and governments have conspired to legalise and legitimise the breeding and consumption of humans for food – or, in the post-Transition parlance, “heads” for “special meat”. The protagonist is Marcos, a bigwig at a factory that raises and slaughters humans for butchers, tanneries, laboratories, and (hold onto your hat) a game reserve. Tender Is The Flesh could be real, but holy heck, let’s all hope it won’t be. Read my full review of Tender Is The Flesh here.

When She Woke by Hillary Jordan

Borrowing from the rich symbolism of The Scarlet Letter, the speculative fiction book When She Woke takes place in an imagined future where we are painted the colour of our crimes. There is no longer any pretense of a separation of church and state, and the prison system has been abandoned in favour of “chroming” – genetically altering criminals so that their skin reflects what they’ve done, as they try to go about their lives (and contend with the stigma they attract). Between the widespread infertility, the overturning of Roe v. Wade, and the rise of cruel and unusual punishment, it’s not at all hard to believe that this one could be real.

Super Sad True Love Story is, if nothing else, accurately named. The love story of Lenny Abramov and Eunice Park takes place against the backdrop of a dystopian future, where the collapsed American economy has threatened the very foundations of society. Books have become “printed, bound media artifacts”, and Lenny’s obsession with them is unusual, to say the least. It’s both horrifying and comforting, in equal measure, to realise that in speculative books that could be real, people can still fall in love and pursue happiness despite the apocalypse unfolding around them. After all, aren’t we doing that in real life ourselves?

The Farm by Joanne Ramos

Surrogacy is already a controversial reality, fraught with ethical dilemmas and opposing opinions, and The Farm doesn’t take that big a logical leap in depicting it. The idea sounds almost utopian at first: a luxury resort with top-of-the-line amenities, and a major financial incentive to stay there for at least nine months. The downside? You’ll spend those months gestating a child for somebody else, and you’ll have no contact with the outside world while you do so. This speculative fiction book is so close to our reality, it’ll give you the shivers.

Klara And The Sun by Kazuo Ishiguro

The idea that super-smart Siri-like machines might rise up is hardly a new one in speculative fiction… but what if they didn’t revolt? What if our Artificial Friends did exactly what they said on the tin, and upheld their obligation to serve us faithfully? This is new ground for “dystopian” literature, and naturally it is being trod by Nobel prize-winner Kazuo Ishiguro in Klara And The Sun. It seems, to me, a far more likely turn of events, that our Artificial Friends will seem benign and benevolent until the very end. That’s not to say that nothing goes wrong, though… Read my full review of Klara And The Sun here.

It seems like every billionaire reckons we’re going to be living on Mars any minute now, but do any of us 99%ers really believe that it could happen? Well, reading The Martian will have you (in this one and very unique circumstance) on the side of the billionaires. Weir did so much research, and did such a good job explaining it all to the Average Joe, that going to Mars – and surviving there, even alone, a million miles away from help or hope – doesn’t seem so unlikely. Plus, it’s just a rollicking fun read, which makes a nice change from most of the other speculative fiction books that could be real. Read my full review of The Martian here.

The Wall by John Lanchester

If the idea of a speculative fiction world where Brexit and “build a wall” were taken to their logical extremes seems Too Real for you, you might want to look away. The Wall is John Lanchester’s fifth novel, set in a near future where an environmental catastrophe has obliterated every coastline and struck fear into the heart of every society. Around Britain they’ve built a Wall, and conscripted young citizens to defend it. Joseph Kavanagh is one such Defender, and his one job is to keep Others – the desperate souls clambering for escape from the rising levels outside – off the wall and out of the country. Its terrifying how real this speculative fiction feels.

The interesting thing about Terra Nullius is that, at first, you won’t realise that it’s speculative fiction at all. The dystopian horrors that Coleman describes have already happened, here in Australia and in every colonised nation on Earth. Nations have been invaded, their people killed and raped, their resources plundered, their children taken… Coleman’s trick is to position the whole human race, our entire species, as the colonised, and extra-terrestrials as the invaders. It’s not so hard to believe that the speculative fiction could be real, because it is. Read my full review of Terra Nullius here.

In Donna Mazza’s “eco-gothic speculative fiction” novel Fauna, she imagines a too-near speculative future where a company, Lifeblood(R), offers huge incentives for women to join an experimental genetics program splicing non-human DNA into embryos for in-vitro fertilisation. It’s really not that hard to believe that a company might actually exploit the desperation of people having difficulty bearing children, or that a government might let them create human-animal hybrids without much regard for the consequences. I mean, it would hardly be the craziest thing ever to happen, would it? Read my full review of Fauna here.