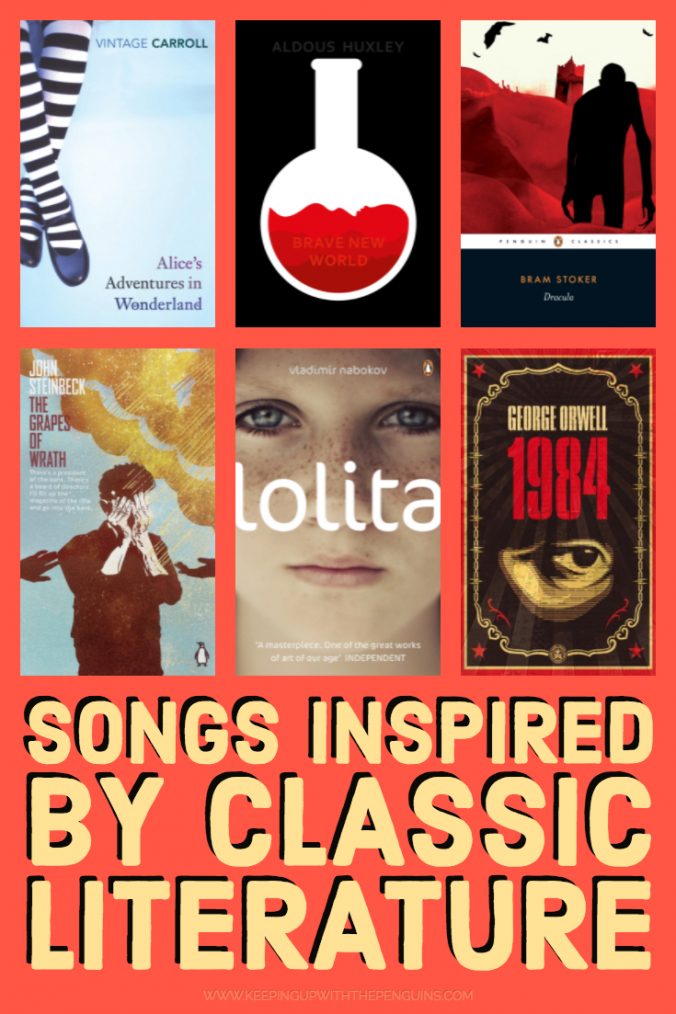 This week on Keeping Up With The Penguins, I read and reviewed the Brontë classic Wuthering Heights. Until I finally got around to reading it for this project, all I knew about the book had been drawn from the lyrics of the Kate Bush song of the same name (spoiler alert: they’re not the same thing). It got me to thinking: what other songs have been inspired by classic literature?

Inspired By: 1984 by George Orwell

This song – along with many others from the same album (Diamond Dogs) – was actually intended for a musical based on George Orwell’s dystopian novel. Bowie scrapped the project after Orwell’s widow raised objections.

It would seem that classic dystopian novels are great sources of inspiration for musicians. “Soma” is the drug of choice in Aldous Huxley’s Brave New World, used to placate and control the population. The same fictional drug has also been referenced by Smashing Pumpkins, deadmau5, and others.

Off To The Races – Lana Del Rey

Inspired By: Lolita by Vladimir Nabokov

Lana Del Rey’s music famously draws frequently from Nabakov’s novel, which centered around an older man’s obsession with his beautiful teenage stepdaughter. This song is particularly notable, though, in that it cites “light of my life, fire of my loins”, a line taken verbatim from the opening passage of Lolita.

My old man is a bad man
But I can’t deny the way he holds my hand
And he grabs me, he has me by my heart

Bonus: Lolita is also referenced in the ’80s classic “Don’t Stand So Close To Me” by The Police. In that track, they spoke from the perspective of the older man, likening his desire to that of Nabakov’s narrator.

It’s no use, he sees her
He starts to shake and cough
Just like the old man in
That book by Nabokov

Inspired By: The Grapes of Wrath by John Steinbeck

Guthrie’s songs, released on the album “Dust Bowl Ballads” the year after The Grapes of Wrath was published, focus on the life of the protagonist Tom Joad, after he is paroled from prison.

Tom Joad got out of the old McAlester Pen
There he got his parole
After four long years on a man killing charge
Tom Joad came a-walkin’ down the road, poor boy

Inspired By: Dracula by Bram Stoker

This track was not only inspired by Bram Stoker’s gothic novel, but it was even used as the theme for Francis Ford Coppola’s 1992 film adaptation of the same.

It beats for you, it bleeds for you
It know not how it sound
For it is the drum of drums
It is the song of songs

I Am The Walrus – The Beatles

Inspired By: Alice’s Adventures in Wonderland by Lewis Carroll

The “walrus” referred to in The Beatles’ 1967 song is actually taken from the poem “The Walrus and the Carpenter”, which Carroll wrote. It featured in the second volume of Alice’s Adventures in Wonderland (Alice Through The Looking Glass).

John Lennon was reportedly dismayed to learn, some time after the song had been written and performed, that the walrus was in fact a villain in Carroll’s original poem. Close reading matters, people!

China In Your Hand – T’Pau

Inspired By: Frankenstein by Mary Shelley

You might not have guessed it, if you’ve only heard the single re-recorded for radio release, but the original album version of this song is packed with references to Frankenstein by Mary Shelley.