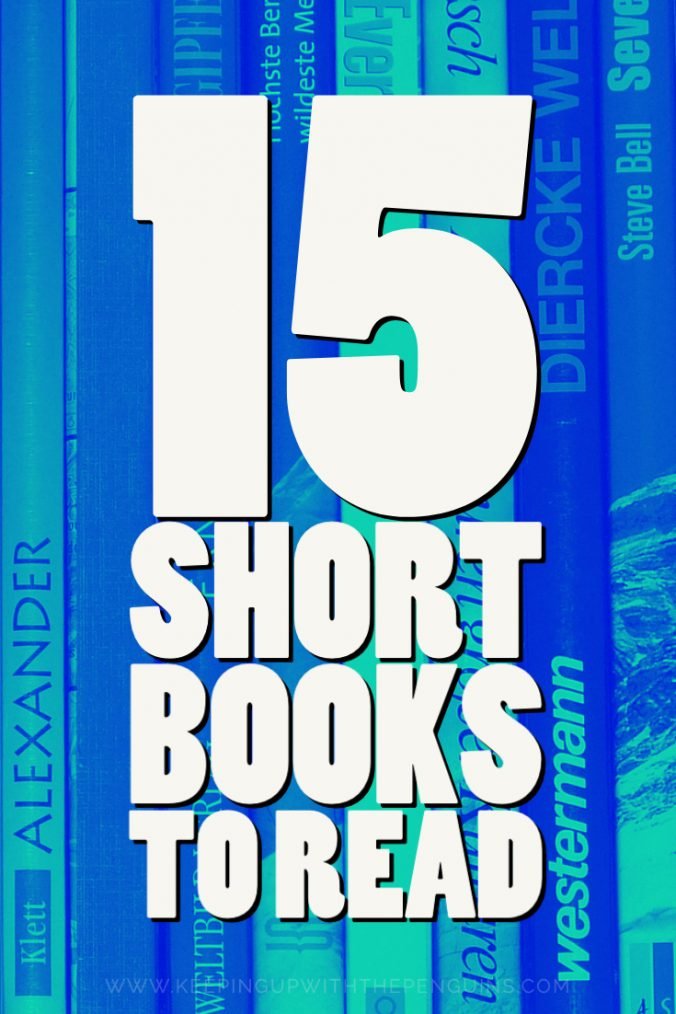 There’s something really satisfying about a slim little paperback. They slide easily into bags, they fit neatly into nearly-full bookshelves, and they hurt far less when you drop them on your face or foot. I’ve put together this list of short books to read (note: these aren’t necessarily quick reads, if that’s what you’re after check out this list), all of which are under 220 pages.

The Hitchhiker’s Guide To The Galaxy by Douglas Adams

The Hitchhiker’s Guide To The Galaxy traverses the whole universe in just 180 pages. The world as we know it comes to an end, and disgruntled British gentleman Arthur Dent unintentionally hitches a ride to safety. Over the course of his short but action-packed adventure, he meets aliens, learns to speak their language, and discovers the true meaning of the universe – complaining all the while. Pick this one up if you’re in the mood for a short book that’s also a wild romp, with some great advice into the bargain (don’t panic!). Read my full review of The Hitchhiker’s Guide To The Galaxy here.

The Vegetarian by Han Kang

The Vegetarian runs to 183 pages, and that was enough to earn Han Kang the 2016 International Man Booker Award. In this dark Kafka-esque tale, Yeong-hye’s ordinary and orderly life is disrupted by a series of brutal and bloody nightmares. She decides, as a result, to renounce meat and live as a vegetarian, much to her husband’s chagrin. As her family circles the wagons to get her back on the righteous path to bacon, Yeong-hye’s choice to eat only plants becomes more and more sacred to her, and she’s forced to take ever-more drastic counter-measures to protect it. Read my full review of The Vegetarian here.

In The Alchemist, a young Andalusian shepherd boy learns some pretty tough life lessons over the course of 167 pages. He finds love, and loses it. He makes friends with strangers, and friends become strangers. He searches the world for treasure, only to find that the real treasure was inside him all along (or something). It all sounds very heavy, but it’s actually a very readable allegory, a fairy-tale for adults full of metaphor and meaning. Read my full review of The Alchemist by Paulo Coelho here.

Before The Coffee Gets Cold by Toshikazu Kawaguchi

Coffee is magical, we all know that for sure, but the coffee served in the small Tokyo cafe at the centre of Before The Coffee Gets Cold is especially so. It allows the drinker to travel back in time… but only for as long as it takes for their beverage to cool. People come to the cafe seeking a confrontation, a final farewell, a special meeting, but they don’t always find exactly what they’re looking for. In just 213 pages, Kawaguchi will change the way you think about the past, and what you might change if you could.

Sula is a short book that will wrench your heart from your chest. Morrison’s characters are richly drawn and carefully crafted with an economy of language that will blow your mind. Sula and Nel share a bond that withstands all manner of threats throughout their youth, but when their life paths diverge it threatens to sever the ties that bind them. Sula is ostracised by the community, while Nel becomes its shining star. Then, there’s a betrayal – will their relationship survive it, as it has survived everything else?

The Little Prince is a children’s story that adults can enjoy in equal measure. Complete with beautiful illustrations, it depicts the predicament of a pilot who finds himself stranded in the middle of the desert, with only a precocious little prince for company. As the pilot tries to fix the wreckage of his plane, the prince slowly reveals how he came to land in the desert and what it will take for him to return to his true home. Bring tissues, this book might be short but it will definitely make you cry! Read my full review of The Little Prince here.

Mrs Dalloway may be short (172 pages), but you’ll be chewing over its contents for a long, long time. In vivid modernist prose, Woolf reveals the turbulent inner life of a society lady as she prepares for a party, and the strange link she shares to a traumatised war veteran. I had a tough time deciphering most of Mrs Dalloway myself, but I figure that’s my fault more so than the book’s; plenty of other readers, who are far smarter than me, have plumbed untold depths in this short novel. Read my full review of Mrs Dalloway here.

The Old Man And The Sea by Ernest Hemingway

Hemingway is famous for his brevity, and it is on best display in his final novel, The Old Man And The Sea. It only takes a paragraph for him to lay out the story – the old Cuban man who hasn’t caught a fish for eighty-four days, and the young boy who cares for him (even though his family forbids him from joining the man on his cursed voyages). It’s a simple tale, told in short, sharp prose, but one that will stay with you long after you’ve turned the last page.

It took Charlotte Brontë 590 pages to tell the story of the relatively-privileged young governess Jane Eyre, but it took Jean Rhys just 171 to reveal its other, darker side – that of the wife Jane’s hero Mr Rochester locked in the attic, Antoinette Cosway. In one of the most brilliant re-tellings of contemporary literature, Rhys explores what drove a bright young woman to “madness”, sold into marriage to a wealthy Englishman and forced from her ancestral home. Wide Sargasso Sea a short book, but it packs one heck of a punch.

Men Explain Things To Me by Rebecca Solnit

With a title like that – Men Explain Things To Me – you’d expect this book to be a multi-volume set. But Solnit has learned an important lesson: that of concision, that her interlocutors seem to have skipped. In 130 arch and funny pages, Solnit explores many of the ways in which the patriarchy keeps women quiet and overlooked: marriage, sex, violence, family, colonialism, and more. Perhaps most importantly, in terms of cultural impact, this is also the book that brought the term “mansplaining” to the mainstream.

A Single Man by Christopher Isherwood

Of all the short books I’ve read (as you can see from this list, there’s been a few!), I don’t think any surprised and delighted me more than A Single Man. It is a blunt but beautiful portrayal of a day in the life of an aging gay man whose partner has recently passed away. Of course, at the time it’s set, their relationship was cloaked in euphemism and forbidden by law, so Isherwood’s protagonist is never recognised as a true widower. It’s not a cheerful read, but it is a deeply moving one. Read my full review of A Single Man here.

Of Mice And Men by John Steinbeck

Of Mice And Men is beloved and bemoaned by high-school students around the globe in equal measure, but it’s frequently assigned reading for them either way because it’s both short and multifaceted. Set during the Great Depression, George and Lennie form what we we might today call their own “found family”, an unlikely pair that care for and protect each other. Sadly, they can’t protect each other from everything. In just over a hundred pages, this book will break your heart (if it didn’t already traumatise you in high school English). Read my full review of Of Mice And Men here.

The Trial by Franz Kafka

Franz Kafka’s stories are typically short – ironically, The Trial is actually one of the longest! But it’s also one of the few that you can easily find published as a book in its own right. This tale is terrifying in an oh-my-gosh-it-could-happen-to-me kind of way: a regular man living his regular life finds himself suddenly and inexplicably arrested, forced to defend himself against an unknown crime. Kafka’s twisted premise is pure nightmare fuel, so it’s a good thing it’s not any longer!

A Clockwork Orange is a short book, yes, but beyond that it’s kind of hard to describe. Is it science fiction? Dystopia? Horror? All of the above? Even if you’ve watched the film and think you’re pretty tough, you’re probably not prepared for the stomach-churning ultra-violence of Burgess’ best-known short novel. In a strange invented language, Burgess describes the tumultuous inner- and outer-world of Alex, a teen confronting the big questions about good and evil far before his time. Read my full review of A Clockwork Orange here.

A Horse Walks Into A Bar by David Grossman

A Horse Walks Into A Bar is a short but searing story, set in a small dive bar in Israel. A comedian takes the stage for his final show, and his on-stage patter becomes a memoir (long before Nanette made it cool). He is forced to confront the one decision that changed the course of his life, a Sliding Doors moment that led him to this stage, this night, and this audience. Grossman’s book is candid, confronting, and chilling – you’ll barely notice the 198 pages flying by.

The First Time I Thought I Was Dying – Sarah Walker