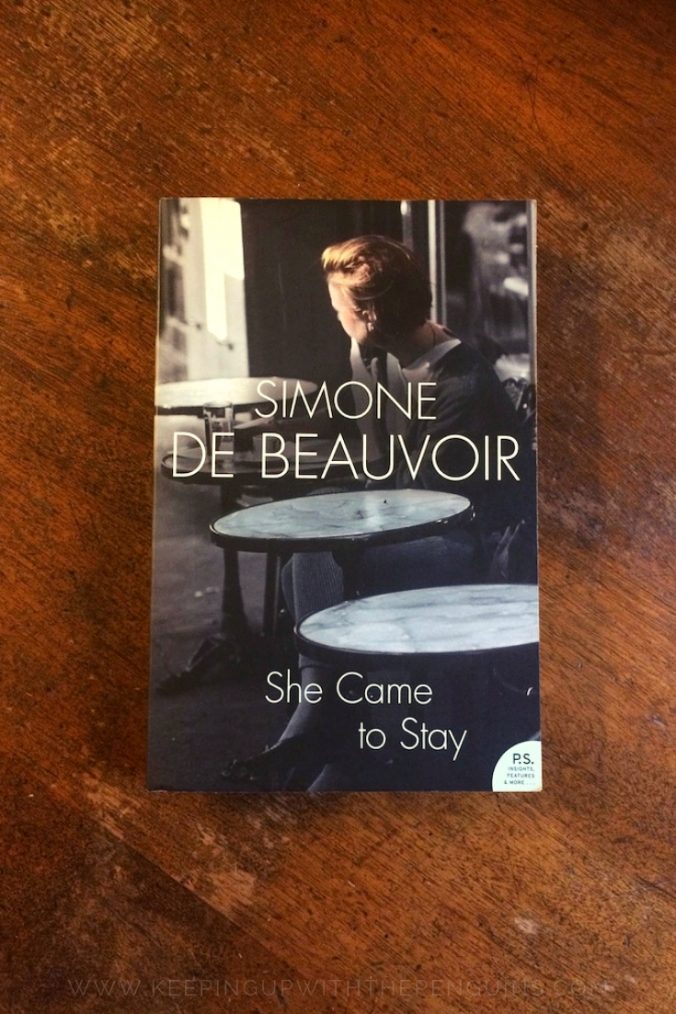 This week’s selection from my reading list is a little treat for myself – it’s been a long year! And I’ve been wanting to read She Came To Stay for ages. It’s been sitting on my shelf tempting me, like a bottle of fine wine. I guess I was just waiting for The Right Moment(TM) to properly enjoy it, and as the year draws to a close, I can happily announce that the moment has finally come.

I was fairly confident that I’d find something of interest in She Came To Stay (or, in the original French, L’Invitée). It was renowned feminist Simone de Beauvoir’s first novel, published in 1943, a fictional account of her and Jean-Paul Sartre’s relationship with Olga Kosakievicz (to whom the book is dedicated). This will hardly come as a shock, but it turns out de Beauvoir had some hard feelings about the 17-year-old who “came between” her and Sartre, the love of her life, and in many ways She Came To Stay is her act of revenge. So, it’s already ticking a few boxes: feminism, thinly veiled autobiographical plot, and a tumultuous polygamous relationship. Goodie!

My only quibble with this edition is that it’s a bit of a #namethetranslator fail. The only information I could find was printed, in teeny tiny font, on the Copyright page: “This translation was first published by Secker & Warburg and Lindsay Drummond in 1949”, but as best I can tell, from what’s Google-able, the actual work of translation was done by Yvonne Moyse and Roger Senhouse. Do better, Harper Perennial!

But on with the story: She Came To Stay is set in Paris, around the time of WWII. A young, naive couple – Francoise and Pierre – are very proudly bohemian. They write, they’re in The Theater, and they have an “open” relationship (though it’s “unthinkable that they should ever tire of each other”). All of that is put to the test when Xaviere comes flouncing in. Basically, She Came To Stay is a cautionary tale about the dangers of poorly-planned polyamory, especially if you’re French and the teenager you take on as a third is a hot mess.


The character motivations are really complex, and hard to wrap your head around at times. Xaviere seemed like a real chore, to put it mildly – I struggled to understand why they kept her around at all. I’m guessing she was really-really-really-ridiculously-good-looking, but de Beauvoir doesn’t actually describe her physicality all that much, one of the many perks of reading books about women by women! I’m still not entirely sure I ever figured them out. Francoise and Pierre’s relationship is hardly healthy to begin with, but when Xaviere joins them, it goes from bad to worse. They’re exploitative, they’re voyeuristic, and they seem to really get off on emotionally abusing one another – it’s all very confronting.

There’s some timelessness to the broader themes, though. True to her reputation, de Beauvoir explored all kinds of existentialist philosophy, ideas of freedom, dependence, sexuality, and “the other”. If you’re not across your existentialist philosophising (hey, no judgement – it’d been a while for me, too!), it’s all about finding the self and the meaning of life through exploring the bounds of free will and personal responsibility. If those ideas grab you, then you’re going to want to give this book a go, because it’s got them all in spades.

de Beauvoir went to great lengths to impress upon the reader that Francoise always came second, in Pierre’s mind, to Xaviere – even though Francoise didn’t seem to realise it herself. The poor lamb falls into the trap of trying to be the “cool girl”, as most modern women do at some point in their lives. She lets his work take precedence, his sexual desires dominate, and she doesn’t dare tell him off (even when he’s being a huge prick). It’s not simple subservience, though. This notion of being “free”, being “open minded”, is a central tenant of Francoise’s identity. She’s not willing to sacrifice that for a silly little thing like emotional security.


Xaviere is unspeakably manipulative, so it’s a testament to Francoise’s strength of will that she’s able to put up with her for longer than five minutes. The teenage strumpet goes above and beyond to drive a wedge between Francoise and Pierre, and for a good two-thirds of the novel she has them dancing on her strings.

By all accounts, these relationship dynamics are the same as those that played out in de Beauvoir’s real-life ménage à trois. She and Sartre purported to value freedom and openness above all else, but clearly that didn’t work out, because she ended up writing She Came To Stay as a way of “dealing with” (her words!) the trauma of Sartre’s affair. This book is basically her equivalent of Taylor Swift’s reputation album.

I really wanted to like it. I was expecting another Jane Eyre or The Bell Jar. But, for the most part, She Came To Stay was just good. Not rush-out-into-the-street-and-shout-about-it good, just good enough to keep going. I felt like it was a bit too long; after just 150 pages, I was wondering where on earth it could possibly go, so the final sections dragged a bit. And the “shock twist ending” was kind of lost on me, I’m sorry to say. In a rare moment of fancy-pants literary high-mindedness, I assumed Francoise was being metaphorical when she (SPOILER ALERT!) described killing Xaviere. You know, I assumed it was a flight of fancy, killing the idea of Xaviere, rather than actually doing it. Not so, it turns out, and I only learned that later, reading up on the book to write this review. Whoops!


In some ways, though, I wasn’t entirely wrong. Francoise finishes off Xaviere to reclaim her own power, and to prove she’s no one’s second choice. In real life, de Beauvoir wrote this book to prove that she shouldn’t come second, either. Right? Maybe I’m stretching. The real-life story has a much happier ending, anyway, you’ll be pleased to know. de Beauvoir and Sartre stuck it out through the Olga years; they remained lovers, companions, and mutual editors until he passed away in 1980. de Beauvoir is now buried alongside him in Montparnasse, where they lived together for most of their lives. And she had a little fun of her own on the side, too; she had a long-running affair with American writer Nelson Algren, but her loyalty to Sartre, and her refusal to leave him, was the cause of its breakdown.

She Came To Stay isn’t Simone de Beauvoir’s best-known work, but I’m glad it was the one I started with. I’ll be reviewing her magnum opus, The Second Sex, here on Keeping Up With The Penguins soon: it’s a hugely-influential account of the status and nature of women in the mid-20th century, and it’s pretty much the reason we remember de Beauvoir as a pioneer of post-war feminism. And, for balance, I’ll be reviewing a collection of Sartre’s essays, too. Stay tuned…!

My favourite Amazon reviews of She Came To Stay:

50 Books To Read Before You Die