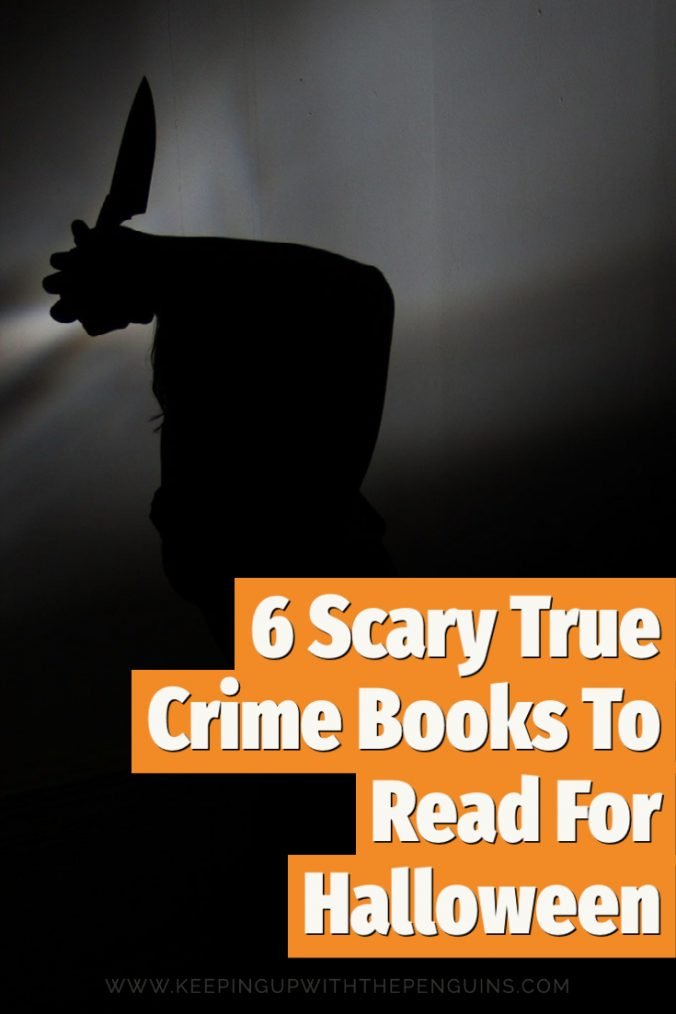 There’s nothing spookier than true crime! It’s one thing to read the twisted product of an author’s dark imagination, it’s quite another to read about real-life horrors inflicted on people just like you. Plus, the truth is so often stranger than fiction, they have twists and turns you’ll never see coming. Here are six scary true crime books to read for Halloween – lock your doors and windows before you dive in!

I’ll Be Gone In The Dark by Michelle McNamara

I can’t think of a crime thriller more chilling than the true crime saga of the Golden State Killer, as depicted in Michelle McNamara’s book I’ll Be Gone In The Dark. The Golden State Killer, still unidentified at the time of McNamara writing the book, terrorised the people of California in the ’70s and ’80s. He is connected to at least 13 murders, 50 rapes, and over 100 burglaries. The book’s title is taken from one victim’s report of what the perpetrator said to her as he assaulted her: he warned her to keep quiet, or else “you’ll be silent forever, and I’ll be gone in the dark”. McNamara, her book and her blog, are credited with drawing attention to the decades-old unsolved case, and the Golden State Killer was identified and apprehended just two months after publication. Read my full review of I’ll Be Gone In The Dark here.

In 1959, the small and otherwise-unknown town of Holcomb, Kansas was shaken to its core by the sudden and violent murders of four members of the well-liked and respected Clutter family on their local farm. The story might have passed into the annals of history with not much more than a small write-up in Time, except that that small write-up was spotted by burgeoning literary darling Truman Capote. In search of his next writing project, he headed to Kansas and spent six years interviewing locals, befriending the killers (once they were apprehended), and compiling eight thousand pages of notes to write his true crime novel, In Cold Blood. Even though Capote has been subjected to any number of critical attacks over the years, most citing his liberal application of creative license in depicting the story of the Clutter murders, his book remains a canonical true crime text and one of the spookiest I’ve ever read. Read my full review of In Cold Blood here.

This House Of Grief by Helen Garner

Helen Garner is one of Australia’s most beloved and respected writers. Her prose is beautiful, masterful, and on occasion she turns her pen to the ugliest and most brutal crimes committed on this southern continent. The crime at the centre of This House Of Grief makes the bile rise in the back of the throat of every Australian, whether they’ve read Garner’s book or not. She attended the trials of Robert Farquharson, who drove his car into a dam and allowed his three young sons inside the vehicle to drown. The facts of the case and the ensuing trials are chilling enough, but it’s Garner’s writing talent that will keep you up at night: the sharp, searing insight with which she articulates every detail will cut you open.

Midnight In The Garden Of Good And Evil by John Berendt

If the Southern Gothic gets your motor running, Midnight In The Garden Of Good And Evil is the true crime book for you. You’ll struggle to find a novel more immersive; Berendt goes above and beyond to really put you in the Deep South, amongst all the colourful characters impacted by the shooting of male sex worker Danny Hansford in 1981. Further proof that this book has the chops: in the years after publication, visitors to the setting of Savannah, Georgia, nearly tripled. This scary true crime book will keep you up all night – even the iconic Bird Girl statue on the cover is enough to give you the creeps.

The name Ted Bundy has become synonymous with vicious serial murders. Seriously, ask any stranger on the street to name a serial killer, and there’s a one-in-three shot that Ted Bundy will be the name they give you. His story, that of the charismatic charming man who lured dozens of women to unthinkably violent deaths by pretending to be injured, has inspired countless books, films, and television series – everyone, it seems, has a Bundy story, so it’s hard to imagine one of them could be definitive… but The Stranger Beside Me is it. Ann Rule was a mid-career crime reporter, working at a suicide hotline in Seattle, when she was partnered with young Republican and university student Ted Bundy. As the years passed, their friendship deepened, and Rule investigated the unsolved assaults and deaths of local women, before realising that her close friend from work could be responsible. Trust me, you’ll look at your friends differently once you’ve read this book. Read my full review of The Stranger Beside Me here.

In the wee hours of a February morning in 1970, the MacDonald family was brutally attacked in their home. Green Beret Captain Jeffrey MacDonald, M.D., was injured, his pregnant wife and two children were killed. He claimed he had been awoken by his wife’s screams, and found himself surrounded by “hippies”, one of whom was holding a candle and chanting “Acid is groovy, kill the pigs!”. That story was found to be complete bullshit by a jury, and MacDonald was convicted of the murders, but he stuck to it. He even hired a true crime writer, Joe McGinniss, to follow the case and write a book about his innocence; he was shocked to discover, upon publication of Fatal Vision, that McGinniss was completely convinced of his guilt and eviscerated his defence in print. McGinniss’s ethical transgressions in writing the book have been the subject of much interrogation and debate, but the original crime and the story McGinniss weaves around it is chilling in its own right.

The Stranger Beside Me – Ann Rule