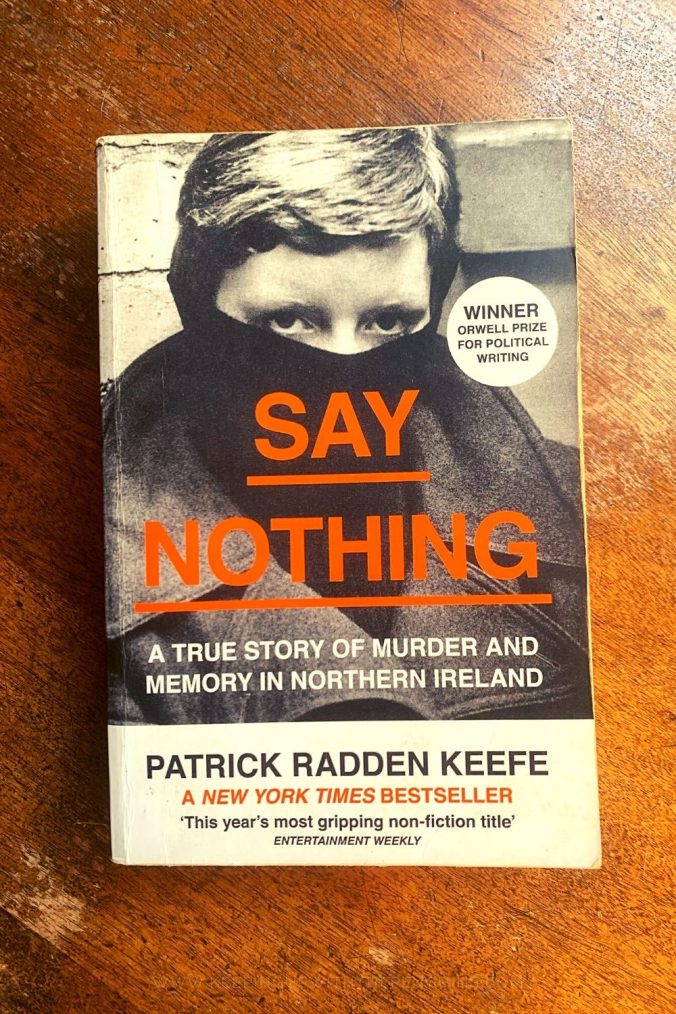 I loved Empire Of Pain so much, I immediately ran out and picked up a copy of Patrick Radden Keefe’s previous best-seller, Say Nothing. It was published in 2018, and billed as a history of the Troubles told through a single cold case, “a true story of murder and memory in Northern Ireland”. I was sure it was going to be a five-star read.

In 1972, Jean McConville, a 38-year-old widowed mother of ten(!), was abducted from her Belfast home and never seen alive again. No one has ever been officially brought to justice for her abduction and murder. Through this unsolved case, Keefe explores the sectarian violence that has divided Ireland, and specifically the culture of silence that underpins the social contract in all areas of Irish life as a result. The title, Say Nothing, is actually taken from a Seamus Heaney poem about the conflict called Whatever You Say, Say Nothing.

Although Say Nothing is broad in scope, a conflict this complex couldn’t be completely captured in a book twice the length. As Keefe says himself in his author’s note on sources:

“This is not a history book but a work of narrative non-fiction…. Because I have elected to tell this particular story, there are important aspects of the Troubles that are not addressed. The book hardly mentions loyalist terrorism, to take just one example. If you’re feeling whataboutish, I would direct you to one of the many excellent books cited in the notes that address the Troubles more broadly or your favoured subject in particular.”

Patrick Radden Keefe on say nothing

So, bearing that in mind, here’s a refresher of the essentials. Nearly 4,000 people were killed in the Troubles between the late 1960s and the late 1990s. For the most part, these deaths were attributable to violence between Catholic republicans – who sought to unify Northern Island with the Republic – and the Protestant paramilitaries, police, and British military, who sought to squash their revolution. This period was punctuated by frequent shootings, riots, and bombings. Many of those killed and injured were civilians.

Surprisingly, fewer than twenty people were “disappeared” during this period (as far as Keefe/we know). Jean McConville was one of them. She was far from the “perfect” victim, as far as the true crime genre goes; by Keefe’s report, she had PTSD (as I’d imagine most people living in Belfast at the time did), she was dependent on prescription tranquilizers, and she was admitted to a psychiatric hospital for treatment at one point. Her life circumstances were tragic, and her disappearance took things from bad to worse for her whole (huge!) family.

So, given the complex nature of the crime and victimology at the heart of Say Nothing, why would Keefe spend a decent chunk of the first half describing the life and (mis)adventures of political activist and Provisional Irish Republican Army volunteer Dolours Price? It wasn’t immediately clear what she had to do with the disappearance of Jean McConville, and in my view Keefe took a little too long to connect the dots.

It’s also worth noting that another decent chunk of Say Nothing is focused on unravelling the myth of Gerry Adams: the good, the bad, and the bitter. He’s famous for negotiating the Good Friday Agreement that saw a rapid de-escalation in violence, but as Keefe shows, his hands are covered in blood.

Around the end of Part Two and the start of Book Three, though, it really started to come together – and from then, I could barely tear my eyes away.

It turns out that Dolours Price, and her sister (also an activist/volunteer), were almost certainly involved in the abduction and murder of Jean McConville, on the orders of Gerry Adams – but proving it is a pipe dream. The only hope of testimony as to their involvement came in the form of the Belfast Project, an archive of oral histories of key players in the Troubles, recorded and stored in the high-security Treasure Room at Boston College in the U.S.

On the one hand, this sounds like a win (“heck yeah! break into the Treasure Room, get the transcripts, solve the cold case!”), but it’s actually a really sad and horrifying story of good intentions and good faith ruined by political zeal. The Belfast Project transcripts were supposed to be sealed, only to be opened after the death of the project participants, for the purposes of academic research. That courts would demand access to them to solve political crimes is, in retrospect, a foreseeable consequence of the project, but not one that the College or the coordinators properly planned for. I’ll leave it to Keefe to explain it in full (you’ll have to read Say Nothing to really “get it”), but suffice to say here, it’s a mess of grey areas and ethical quandaries.

In the final chapter, Keefe switches to a more personal tone, and offers his own insights without his journalistic hat on. He provides some context as to his own Irish heritage, how he heard about Dolours Price and Jean McConville, and why he chose to pursue the story. He draws conclusions as to what “really” happened to McConville – as the true crime genre dictates he must – but he makes clear to the reader what can be “proven” and what is purely his own educated guesswork.

I guess I came to Say Nothing expecting a bit more true crime, and a little less history – which is a fault of my own, not Keefe’s incredible work. It’s less of a family saga than Empire Of Pain, and more a documentary-style investigation into the consequences of violence and silence. So, even though it wasn’t exactly what I expected, it was still pretty damn good, and I learned a whole heck of a lot.

(Trigger warning for a dog death – it’s glanced over, early on, but it was enough to make me teary, reading while hormonal and drinking wine. Also beware sectarian violence, mass murder, and abuses of many kinds.)

My favourite Amazon reviews of Say Nothing:

10 Books I Read Because I Liked The Movie