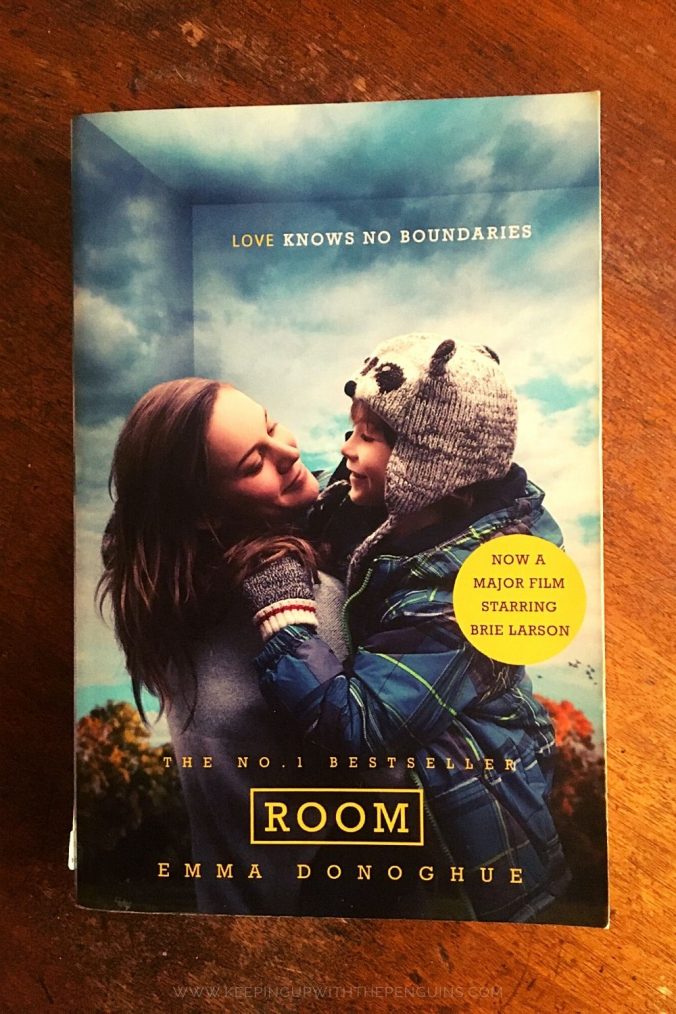 Sometimes a book’s premise alone is enough to chill you to your core. Room, a 2010 novel by Emma Donoghue, is a story told from the perspective of five-year-old Jack, a boy who has spent his entire life held captive in a single locked room with his mother. It’s all he has ever known. This is no post-apocalyptic hide-out or agoraphobic folie à deux – they are both victims of a terrible crime (based on the real-life horrors of Josef Fritzl).

At first, Jack is unaware of his own origin story. The man he calls “Old Nick”, their vile captor, kidnapped Jack’s Ma when she was just 19 years old (oh, yeah, by the way: TRIGGER WARNING, for everything you can imagine in such a scenario). Ma has been imprisoned since that time, seven years ago in the book’s timeline, and Jack is the product of Old Nick’s ongoing sexual abuses. He keeps Ma – and now, Jack – secured in a single-room outbuilding, fitted out with the bare basics (stove, toilet, wardrobe, sink, bed, a TV set): the titular room.

As the narrator of Room, Jack notices every detail, so his world feels very big, even though we know it is suffocatingly small. While for us (and for Ma) such an existence is horrifying, for Jack it simply is. Lacking any frame of reference, Jack believes that the room constitutes the whole world, that the objects it contains (Plant, Rug, Toothbrush) are his friends, and that the things he sees on TV aren’t “real” the way that he and Ma are. She, of course, can’t bring herself to scare or shatter him by telling him the truth.

Ma actually does a remarkable job of keeping Jack happy and healthy, given the circumstances. She continues to breastfeed him, bolstering the meagre nutrition he gets from the food Old Nick provides. They have a daily routine of physical exercise and rudimentary schooling, and she is fastidious about Jack’s hygiene. After all, if he gets sick, there’s nowhere she can take him and no one she can ask for help.

That notion is actually the impetus for the big turning point in Room, an escape plan to get Ma and Jack out from Old Nick’s clutches. Ma convinces Jack to feign deathly illness, hoping that Old Nick would take pity on the kid and take him to a hospital. She coaches Jack on how to ask for help in a world he has never seen or known (and, to be honest, isn’t really sure exists).

The first attempt fails, with Old Nick refusing to take Jack to get medical attention, so Ma ups the ante: she teaches Jack to play dead. She manipulates Old Nick into removing Jack’s “corpse” from the room, and Jack waits until the opportune moment to run and find help. Despite his fear and his difficulty communicating (remember, he has never seen or spoken to anyone other than Ma – when Old Nick visits for his nightly rape, she hides Jack in the wardrobe), he manages to help the police find the room and his mother. The two are “rescued”, and taken to a mental hospital for treatment and re-integration.

Reading Room is strange for a lot of reasons, but mostly for the uncomfortable yet compelling contrast between the horror of the truth and the innocence of the child narrator. Old Nick is perhaps one of the most terrifying villains I’ve ever encountered in fiction, and yet I really appreciated that the story is not “about” him. He is never given a real name or a back story, beyond his abduction of Ma, and he’s rarely actually “seen”, by Jack or by the reader. He’s more of a looming threat, an anonymous boogeyman.

This was actually a very deliberate decision by Donoghue in writing Room. In an interview, she said: “I didn’t want to let him off the hook. Once he’s arrested he disappears, because I refuse to be that interested in him. As a society we’ve given disproportionate attention to the psychopaths – the average thriller is about a psychopath who wants to rape and chop up a woman. I wanted to focus on how a woman could create normal love in a box.” Well said!

Donoghue has also been very open about her inspiration, saying that the idea was “triggered” by the Fritzl case: “The newspaper reports of Felix Fritzl [Elisabeth’s son], aged five, emerging into a world he didn’t know about, put the idea into my head. That notion of the wide-eyed child emerging into the world like a Martian coming to Earth: it seized me.” The whump Donoghue experienced on hearing Felix Fritzl’s story may have had something to do with the fact that her own son was four at the time. The bond between mother and child is the heart of Room, and while that’s not usually my schtick, it really got me in this one.

All told, Room is stay-up-all-night-to-finish-it readable (as, indeed, I did). You’d be forgiven for being skeptical going in, figuring (once again, as I did) that the premise and the plot was too obviously horrifying to be truly immersive and that the pulling-of-heartstrings would feel contrived, but I can promise you you’re in good hands with Donoghue. Even if you know every single spoiler, you’ll still find your heart pounding, as the emotive nature of the novel isn’t rooted in any schlocky plot twists. Room is one of the very few genuinely scary reads that definitely lives up to the hype.

My favourite Amazon reviews of Room:

My Mess Is A Bit Of A Life – Georgia Pritchett

10 Fictional Books Based On Real Crimes