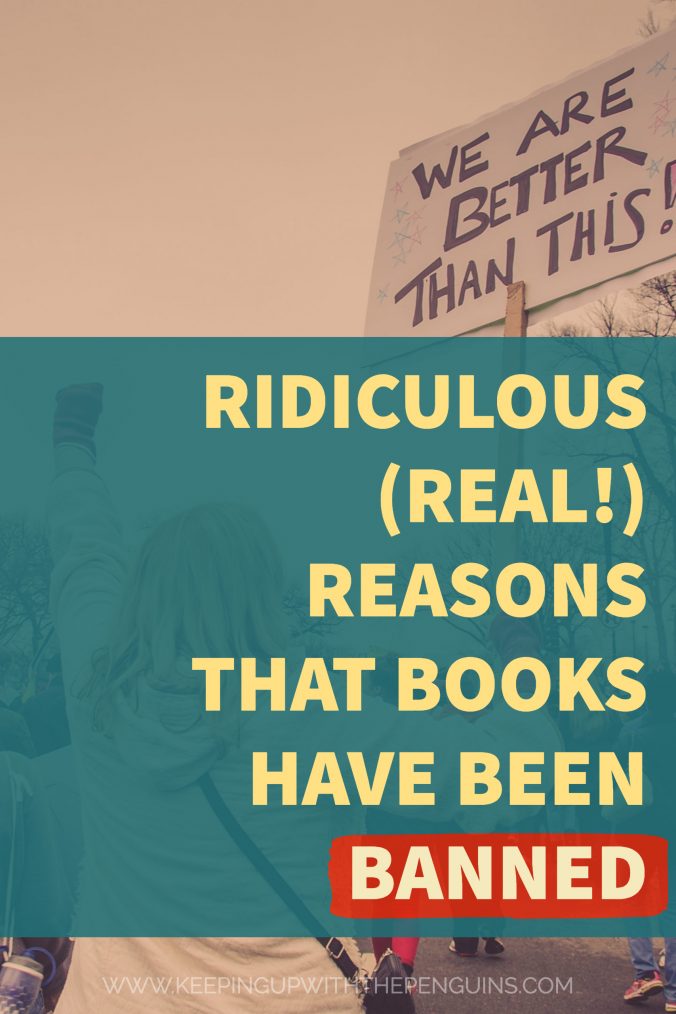 At the end of this month, we’ll be celebrating Banned Books Week (23-29 September), an annual event promoting free and open access to literature. According to the official website, over 11,000 books have been challenged since 1982 (a “challenge” being an attempt to ban or restrict materials, brought by an individual or group, on the basis of content). The idea of a whole week dedicated to unorthodox and unpopular literature originated in the U.S. through the American Library Association, but it has gathered steam and spread worldwide. Banned Books Week draws international attention to the very real dangers posed by censorship – be it at the hands of schools, states, or federal governments.

Personally, I love banned books. In fact, it would seem that the majority of the books on my reading list have been banned, challenged, or censored at some point in history, somewhere in the world. At least 20 of them appear in the American Library Association’s top 100 lists of banned books over the past two decades. What I find most disturbing is the number of books that have been challenged because they contain diverse content; of the top ten most frequently challenged books in 2015, for instance, nine of them (quick maths: that’s 90%) featured or were written by people of colour, LGBTIQA+ people, and/or people with disabilities. Why are we so quick to challenge inclusive content from groups that are already marginalised in so many other respects?

Well, my favourite way to confront things that I don’t like is to laugh at them (of course!). So, let’s all have a chuckle at some of the most ridiculous (real!) reasons that books have been banned, challenged, or censored.

The Adventures of Huckleberry Finn by Mark Twain

Reason Given: It is “trash and suitable only for the slums”

It was an auspicious start to a long and illustrious lifetime of bans and challenges for Mark Twain’s The Adventures of Huckleberry Finn. Right up to the present day, it has been challenged repeatedly on the groups of racial insensitivity, perpetuation of racism, use of racial stereotypes, and coarse language. The fact that it accurately reflects the treatment and lived experiences of people of colour in 19th century America seems to have no bearing. Read my full review of The Adventures Of Huckleberry Finn here.

The Call of the Wild by Jack London

Reason Given: It is “too radical”

A nice story about a man going for a walk with his dog (ha!) is clearly of great concern, and not only to the Nazis. The Call Of The Wild was also banned in Italy and Yugoslavia at different points, and has been challenged more recently in the U.S. for “age-inappropriateness” and concern about the author’s “pro-Socialist” views. Read my full review of The Call Of The Wild here.

The irony here is mind-boggling! Surely no one ruling on these challenges has actually read the Fahrenheit 451, a dystopian science-fiction novel about a future world where books are illegal. A (somewhat oblivious) Californian school mandated the use of an expurgated version of the text in their classrooms, with all the “bad” words blacked out. Bradbury’s work has also been challenged and banned in other districts, usually citing its profanity, anti-government advocacy, opposition to religious belief, and – best of all – “questionable themes” (could they be any more vague?). Read my full review of Fahrenheit 451 here.

The Grapes of Wrath by John Steinbeck

Reason Given: “Portrays Kern County, California in a negative light”

That’s right: Kern County is not only the setting of Steinbeck’s The Grapes of Wrath, but it was also the first place to ban it. The book was similarly banned in Ireland in the 1950s, and Turkish booksellers were charged for “spreading propaganda” when they sold the book in the 1970s. Grounds for other subsequent challenges include its profanity (“goddamn”), and sexual references. Read my full review of The Grapes Of Wrath here.

Leaves of Grass by Walt Whitman

A wonderful little organisation called the New York Society for the Suppression of Vice (sadly now disbanded) was not a huge fan of Whitman’s Leaves of Grass. They pressured publisher James Osgood to cease distributing the work altogether, arguing that it violated “the Public Statutes concerning obscene literature”. When that failed (good on ya, Osgood!), the upstanding booksellers of New York took it upon themselves to advise their customers not to purchase the “filthy” book. I must say, if I received such a warning, I’d probably buy two copies.

Reason Given: It “conflicted with community values”

Ah, that old chestnut! Which community values were contradicted exactly remains unclear, but Moby Dick definitely contradicted them, according to a school district in Lindale. Other books banned by the same school under that ruling include To Kill a Mockingbird, The Scarlet Letter, and – the darling of Banned Books Week, mentioned above – The Adventures of Huckleberry Finn. Read my full review of Moby Dick here.

Reason Given: It is “poorly written”, and there are “concerns that a group of teenagers will want to try it”

I shouldn’t play favourites, but as far as I’m concerned this is the best ridiculous reason for a book to be challenged, ever! I can understand perhaps thinking that the content of Fifty Shades of Grey is a little “adult” for a very young audience, but what a way to articulate that concern! The Malaysian government did a little better: they banned the entire trilogy that same year, for its “sadistic” material and its “threat to morality”.

*Note: the location of this particular challenge has not been made public. The wonderful team at the ALA Office for Intellectual Freedom were kind enough to tell me why: librarians and other professionals who wish to seek support from their office, but fear reprimands or punishment at work for reporting instances of censorship, are welcome to submit their concerns confidentially. However, they also confirmed for me that this was, in fact, a legitimate challenge reported to their office in 2015.

Lord of the Flies by William Golding

Reason Given: It is “demoralising, in that it implies that a man is little more than an animal”

This reason for challenging Lord of the Flies is lifted directly from its very premise. Any kid writing a book report can tell you that Golding’s whole point was that man is not that different from the animals. Such logic isn’t stopping the censorship brigade, though! They’ve also challenged this book for its obscene language, violence, and – I swear, I’m not making this up – animal cruelty. Read my full review of Lord Of The Flies here.

Reason Given: It would be “disastrous to put animals and human beings on the same level”

Yep: anthropomorphised animals really freak out the Chinese government. They felt that Lewis Carroll’s charming children’s fantasy novel, Alice’s Adventures in Wonderland, was an insult to humans, and would teach children “disastrous” things (i.e., that humans and animals are “on the same level”). Can you imagine?

All The King’s Men by Robert Penn Warren

Reason Given: Depicting a “depressing view of life” and “immoral situations”

God knows, we can’t have young adults exposed to a depressing view of life in literature! Especially not when it reflects immoral situations! How else will they learn that the real world is all sunshine and rainbows, and everyone does the right thing always?! We can hardly blame the good people of Dallas, Texas for challenging All The King’s Men, really. Read my full review of All The King’s Men here.

Removed from classrooms in Miller, Missouri (1980)

Reason Given: “It makes promiscuous sex look like fun”

Honourable mentions must also go to: The Holy Bible (challenged for its “religious viewpoint”), The Witches by Roald Dahl (for “encouraging disobedience”), Are You There God? It’s Me, Margaret by Judy Blume (for “content dealing with menstrual cycles and feminine hygiene”, heaven forbid) and A Clockwork Orange by Anthony Burgess (inexplicably challenged for “obscene language” only, when half the book is written in a nonsense language invented by the author and depicts some of the most graphic sexual violence and state-perpetrated violence that I have ever read – check out my full review for more details).

So, now that we’ve all had a good laugh, let’s get back to Banned Books Week. The battle against censorship is never won. Take some time out this month to read books that people tell you you “shouldn’t”. Soak up some dangerous ideas. Support an author who has been challenged or banned (buy their book, go to their talk, request their work at your local library). None of us have to like everything, but we should do everything we can to make sure that no one impinges on our right to read anything.

Have you come across a ridiculous reason that a book has been banned? What will you be reading to celebrate Banned Books Week? Let me know in the comments (or give it a shout-out over at KUWTP on Facebook!).