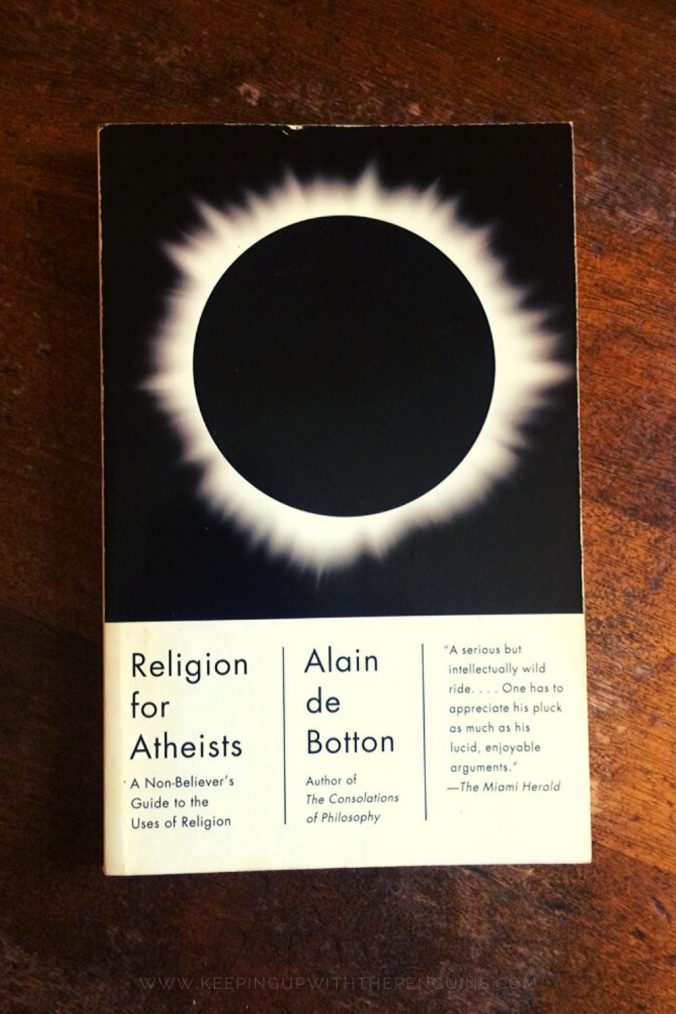 I can honestly say that since I started the Keeping Up With The Penguins project, I haven’t DNF’d a single book (that’s did-not-finish, for those of you playing at home). I just don’t feel like I can bring you an honest and fair review without having slogged all the way through, even the ones I’m not enjoying. Before I started this reading project, though, I was liable to put a book down if it wasn’t holding my interest, and go on my merry way. That’s what happened when I first tried Religion For Atheists by Alain de Botton. Now that I’ve finished reading my way through my original Keeping Up With The Penguins reading list, I figured it might be a good time to go back and revisit some of those earlier abandoned tomes…

Religion For Atheists was published back in 2012, and I picked it up shortly after hearing an interview with Alain de Botton on Triple J’s Sunday Night Safran program (RIP!). I can’t remember why I abandoned the book exactly – about a hundred pages in, according to where I left the bookmark – only that it wasn’t as funny as I was expecting. de Botton was hilarious in the interview, which is what convinced me to pick up his book in the first place. When the first hundred pages didn’t even elicit a chuckle, I guess I figured it was a waste of my time.

Now, I’m a big believer that a book has to come to you at the right moment in your life – and that’s why I decided I was ready to give Religion For Atheists another shot. A lot has changed for me since 2012, and I no longer demand that my books be a giggle-fest in order to keep going.

I was right to go back to it. I am, like de Botton, a lifelong atheist (seriously, I didn’t even do religious education in school, and I can count on one hand the number of times I’ve entered a house of worship). The cover of Religion For Atheists promises “a non-believer’s guide to the uses of religion”, which is right up my alley.

de Botton starts off by pointing out that it is extremely boring to ask whether any given religion is “true” or “right” on the question of God and the afterlife (and I heartily agree). In fact, there’s very little about “God” in this book at all, so if that’s what you’re after, you can skip this one.

de Botton also says straight-up that he has no intention of comparing religions with one another (phew!). In his view, all religions evolved to serve the same basic needs: community cohesiveness, and coping with the inevitable pain of life. Religious or not, we all need a little cohesion and coping, so he contends that while the supernatural claims of any and all religions are false (and that can be taken as read), some aspects of them are still useful in their applications for secular life and society. Basically, he’s saying we can all benefit from the wisdom and power of religion without having to get down with any of the woo-woo aspects of it. I’m sold!


Religion For Atheists is straight-forward in its layout, too. de Botton takes a problem in society, discusses how various religions have attempted to solve it, and then proposes a secular version that we might implement to better our lives. These problems are as varied as “Education”, “Pessimism”, and “Community”. In “Institutions”, for instance, de Botton compares organised religions to corporations, in the sense that they efficiently spread their message, accumulate wealth, and enact social change. He makes the case that we could start advertising values the way that we advertise brands, a kind of late-capitalist conversion that would allow us to use institutional structures in a more positive way.

The sections are interspersed with beautiful photographs and reproductions of religious artworks – the production values of the book are gorgeous, but the best parts are the humourous captions that de Botton has added below each image (I KNEW he was funny!).

I know fuck-all about most religions (lifelong atheist, see above), so I was grateful to see that de Botton doesn’t assume much prior knowledge. In fact, I think he managed to teach me a thing or two that even religious folks might not know themselves. I learned, for example, that Catholic Mass actually began as a shared meal, more along the lines of the Jewish Shabbat dinner. Workers would down tools to gather around a table (as opposed to gathering to face an altar), and eat and drink to commemorate The Last Supper (I’d heard of that, at least, thanks to The Da Vinci Code). The way we do it today is very different, and would be basically unrecognisable to those early Catholics (and you can make an argument that the changes haven’t necessarily been for the better).


So, what did I take from all this? Did de Botton convert me? Not quite – though I’m not sure he intended to. I really responded to the idea of the Jewish Day of Atonement (Yom Kippur) – an opportunity to reflect on those whom you’ve wronged and how. On that designated day, you seek them out and express contrition. It is “a rare opportunity for blanket forgiveness”, de Botton says, which serves as a balm for those festering resentments that might otherwise tear a community apart. It’s a way of communally acknowledging that we’re all flawed, so we must all forgive one another and be forgiven, and just get on with things. I can certainly see how it would be beneficial, and it’s a perfect example of the type of religious ritual that emerged for purely pragmatic reasons (which is, after all, de Botton’s whole point). We infuse these rituals with “divine” ideas in order to protect them and keep them going, when really, we might not need to. According to de Botton, we could incorporate them into our secular lives and simply accept they are important, without any need for a “higher power” to tell us so.

I also really appreciated that de Botton didn’t oversell or waffle on. Religion For Atheists is actually a surprisingly short book, given the lofty subject matter. The reviews were mixed, of course: given the premise, de Botton was always bound to offend or piss off just about everyone. He said that in writing this book, he wanted to help atheists derive the benefits of religion, but I think (if they’re not too horrified at the whole God-ain’t-real-get-over-it approach) religious people could gain a lot of insight from it, too. Religion For Atheists has a newfound timeliness given the recent revelations of widespread institutionalised sexual abuse in multiple churches. It could really help those believers who are struggling with the organisations of their faith, but are scared to lose the comfort and clarity they get from its tenets and ceremonies.

All told, I found Religion For Atheists thought-provoking and highly readable (this time around, anyhow). I’d heartily recommend it to anyone who’s curious about how stuff works, in general, and society/religion in particular. Plus, I’ll now forever use it as my example of why it’s important to revisit a book you did not finish – if you write it off forever, you might really be missing out.


My favourite Amazon reviews of Religion For Atheists:

7 Books That Changed My Life