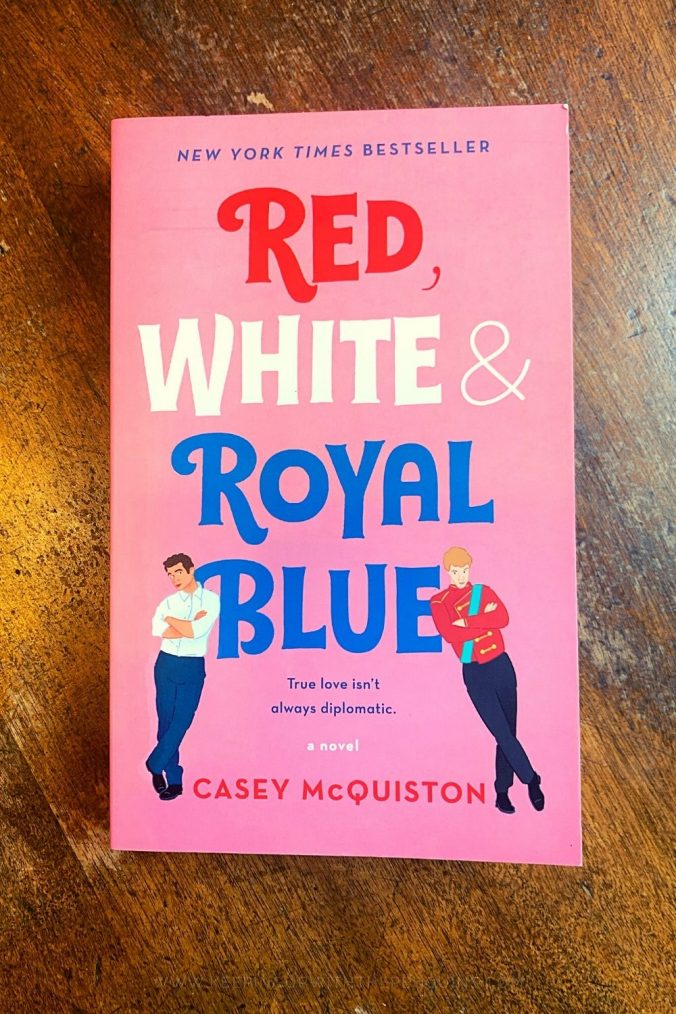 What happens when America’s First Son falls in love with the Prince of Wales? It’s a killer premise for Casey McQuiston’s debut novel (and #Bookstagram darling) Red, White & Royal Blue. They’ve quickly become one of my automatic-buy authors – I loved One Last Stop, and I’m desperate to get my hands on a copy of I Kissed Shara Wheeler – so it was great to go back and see where it all began for them back in 2019.

McQuiston, unsurprisingly, came up for the idea for Red, White & Royal Blue – a romance between the heirs to two of the world’s most powerful families – during the 2016 American presidential election. They’ve also cited the TV show Veep, the Hilary Clinton biography A Woman In Charge, and royal romance The Royal We as sources of inspiration.

It makes for a delightful escapist read. Alex Claremont-Diaz, one of the romantic leads, is the First Son of America’s first woman president. He’s had a few encounters with Britain’s Prince Henry, none of them good. Their mutual dislike bubbles over at a royal wedding, when a little argy-bargy sends them careening into an extravagant wedding cake – a moment unfortunately captured by photographers.

So, it’s time for damage control! Their handlers concoct a plan for Henry and Alex to make a public show of friendship, to alleviate the risk of any further diplomatic incidents. Red, White & Royal Blue isn’t so much a fake-dating romance book as it is a fake-friendship-turns-into-real-dating romance book – a welcome twist on the trope.

Alex and Henry’s forced proximity really keeps the tension high, and propels the plot forward. Their burgeoning love affair is paced just right – not so quick as to be completely unbelievable, not so slow as to become boring, and with just the right amount of angst. The sociopolitical complexities of coming out are addressed as significant obstacles, but not overwhelming ones.

The only flaw in Red, White & Royal Blue‘s story, as far as I could see, was that one of the plot points (re: the emails, no spoilers but IYKYK) was so blatantly foreseeable! I felt like I spent two-thirds of the book waiting for that particular shoe to drop. Hot tip: if you EVER want to keep ANYTHING secret, NEVER put it in writing – especially in a romance novel!

That was forgivable, though, given how FUN this novel was. It’s hard to believe McQuiston was a debut writer. The tone was consistently youthful (without being either annoying or condescending), wry, and self-aware.

I did get a weird pang towards the end, looking at the dates. The timeline of Red, White & Royal Blue clearly stretched in the future at the time McQuiston was writing; they (understandably) had no idea that absolutely everything would change in 2020. It makes for a heart-wrenchingly sweet parallel universe where a left-wing woman could be President and none of us ever did a birthday party via Zoom.

Red, White & Royal Blue, unbelievably, lives up to the hype. Of course, it’s targeted at younger readers, but I can vouch for the fact that it resonates for young-at-heart readers, too. I’d especially recommend it for fans of The West Wing, and/or anyone who’s just particularly burned out by The State Of The World and looking for some starry-eyed optimism.