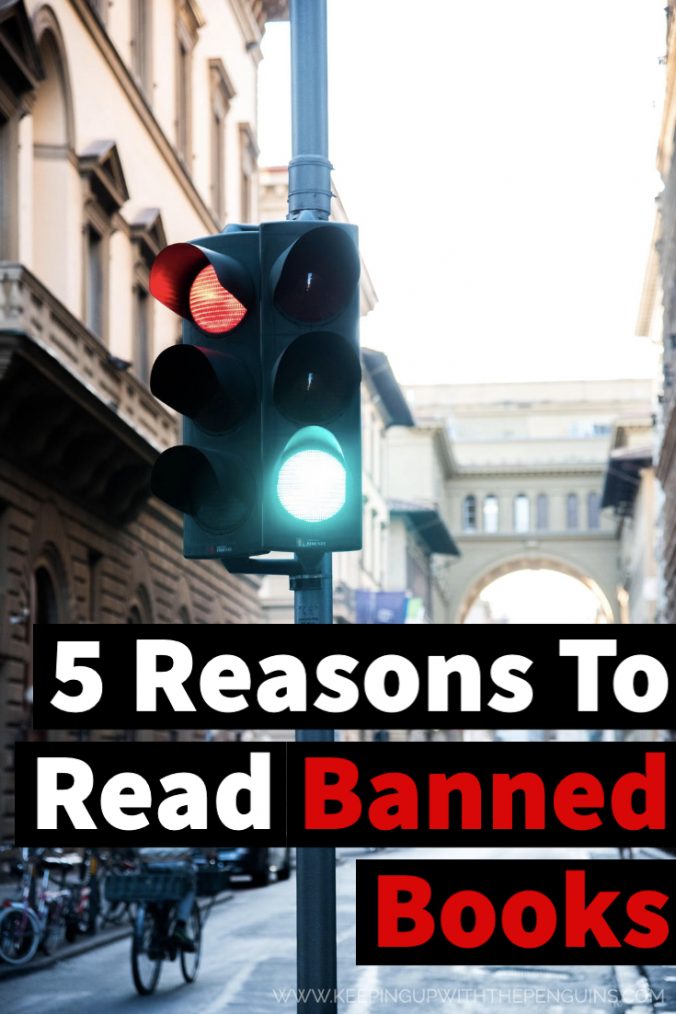 Despite, y’know, everything going on (picture me gesturing wildly as I say that), the fine folks at the ALA are forging ahead with Banned Books Week this year – good on ’em! You’d think, as time went on, we’d all get a little smarter, a little kinder, and stop trying to decide for others what reading material they should or shouldn’t be able to access. Alas, last year saw a 14% increase in attempts at censorship in libraries – and the majority of those attempts were challenges to books on the basis of their content. But in a small gesture towards “being the change I want to see in the world”, rather than focusing on why books have been banned or which books have been banned (as I’ve done in the past), I’ve decided to focus instead on the positive: here are five great reasons to read banned books, even if others think you shouldn’t…

1. Reading banned books will make it easy to support authors from marginalised communities

If you take a look over just about any list of banned books (like this one, the ten most banned books of 2019), you’ll notice something strange: almost all of them are written by authors from marginalised communities. Whether they’re LGBTIQ+, whether they’re migrants, whether they’re from minority religious backgrounds – the one thing they share in common is that their voices have long been silenced in the publishing world. There are a lot of ways to put your power to use, even if you only have a little, and one of the biggest ones in this capitalist hellscape is the way you spend your consumer dollar. Buy a book that was banned, and put your money and support behind an author who needs it.

2. Reading banned books will set a good example and open conversations with other readers in your life

Humans aren’t always that complicated. For most of us, most of the time, it’s monkey-see-monkey-do. If your loved ones see you reading banned books – heck, even if they just see them on your shelves – you’re nudging them towards normalising that behaviour and adopting it themselves. Books of any kind (but especially banned books) are also great conversation starters. If your kid sees you reading a book about queer families, it gives them the opportunity to ask why some kids have two dads or two mums or more or neither – and that in turn gives you the opportunity to teach them. If your racist uncle sees you reading a book written by a person of colour, they might start to think about the value of those communities in a new way. One of the best reasons to read banned books is to break down the walls of the echo chamber.

3. Reading banned books will probably put you ahead of the curve in being well-read

Just about every book we now consider to be a “classic” was, at some point, banned or censored. The Adventures Of Huckleberry Finn was called “trash, only suitable for the slums”. Leaves Of Grass was called “filthy”. Alice’s Adventures In Wonderland was pulled from shelves because talking animals were somehow blasphemous. Heck, even Shakespeare was called a pornographer, back in the day! So, logic would suggest that someday, people will look back on the way we have treated The Hate U Give or The Handmaid’s Tale with the same confusion and derision. If you go ahead and read them now, you’ll be ahead of the curve – you’ll have read the classics before they were cool and above reproach!

4. Reading banned books will diversify your bookshelves, and your mind

When you look over any list of reasons why books have been banned – LGBTIQ+ content, political content, religious content, profanity, drug use – you’ll notice they are all rooted in the same thing. All of those reasons involve someone making choices that are fall outside of the bounds of the “dominant culture”. These books are written by and about people who live differently to those who would have their books removed from the shelves. But isn’t that the very reason we read books – any books – to begin with? To escape and learn and grow through viewpoints and lives that are different to our own? How dull our bookshelves be if they only contained stories we already knew! If you want some specific tips on how to read more diversely, I’ve got ’em here.

5. Reading banned books will stick it to The Man!

No one should get to decide what you read but you. Sure, it’s great to take suggestions and recommendations from others (heck, that’s the foundation on which this blog was built), but surely we’d all prefer to decide for ourselves in the end whether or not a book is “for us”. It’s always struck me as strange that the same folks who complain about a “nanny state” because there are signs encouraging them to pick up their dog’s poop are the same folks who want a book removed from a school library because it might suggest to their kid that being gay or brown is okay.

Whether or not the content of any given book is good or bad or worth listening to is a personal decision. I know there are some books that incite hatred and violence that turns my stomach, some books that espouse religious and political views I find repugnant… just like I know there are some readers out there who find queer romances threatening, or books about police brutality too confronting. The difference is that I would never dream of draining my time and energy in an effort to stop anyone else from being able to access books I don’t agree with, simply because I don’t agree with them. If you’re unwilling to accept the reasoning “because I said so”, that’s probably the best reason to read banned books.

The Hate U Give – Angie Thomas