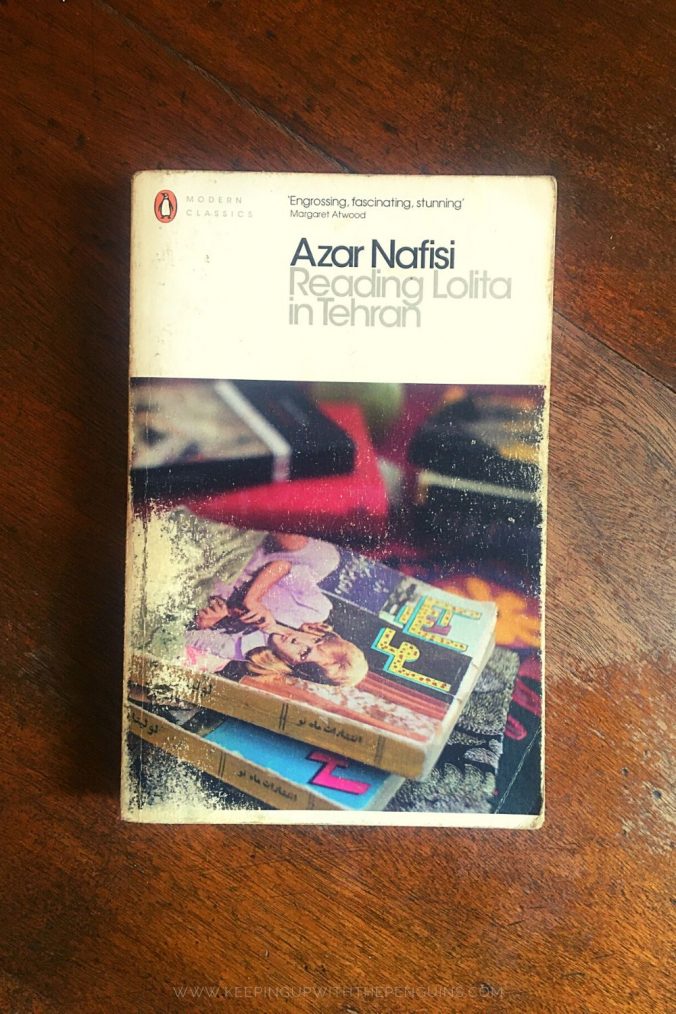 Reading Lolita In Tehran is a memoir by Iranian academic Azar Nafisi, first published back in 2003. She taught Western literature in Tehran in the mid-90s (a particularly fraught career choice in a notoriously troubled part of the world). After resigning from her university job, she started a book club of her own, with seven of her best and most committed students – all women. In her living room, every Thursday morning, they would meet to discuss great works of Western literature: Gatsby, Huck Finn, and yes, Lolita.

Let’s start with a bit of a timeline (because the stories related in Reading Lolita In Tehran are a bit wonky). Nafisi returned to Iran, her country of origin, during the revolution of the late ’70s and early ’80s; she’d spent quite a period abroad, studying and living in the U.S. and Europe. She took a job teaching at the University Of Tehran, but left (slash got the sack) after some disputes with administration. In 1981, she took another teaching job, this time at the University of Allameh Tabatabei, around the same time that the Iran-Iraq War really kicked off. She held out as long as she could, but eventually left (slash got the sack) in much the same circumstances as her previous employment.

Nafisi was the Iranian equivalent of a mouthy broad, who didn’t like wearing the veil and didn’t like being told she couldn’t teach her beloved works of English literature, with all their alleged bad influences, to students. This all culminated in her starting a class of her own, effectively a book club with an academic bent, from her living room. It ran for a few years in the mid-90s, before Nafisi and her husband made the difficult decision to leave Tehran and emigrate to the U.S.

She tells her story in four parts, each named for a book or author whose themes resonate with what she covers in that section: Lolita, Gatsby, James, and Austen (though they read much more broadly than that – Nafisi references The Adventures Of Huckleberry Finn, Alice’s Adventures In Wonderland, Wuthering Heights, and dozens of others over the course of Reading Lolita In Tehran).

In the first section, Lolita, Nafisi’s living room becomes a “place of transgression”, where women remove the veil and talk about books that their leaders have banned them from reading (and, naturally, the conversations spiral in all kinds of subversive directions). Right from the outset, I found the prose flowery, much more so than I was expecting. Nafisi combines genuinely interesting literary insight with wistful (and, at times, annoyingly insubstantial) personal recollection. She introduces each of her students, but I figured she would later provide more detail to flesh them out, so they could become more than names and pretty outfits under their veils.

But in the second section, Gatsby, Nafisi abruptly abandons the book club for a different set of recollections, of her return to Iran and her time teaching at the University Of Tehran (eleven years before the book club even began). There’s a few very interesting chapters, depicting a mock trial she and her students held for The Great Gatsby in class, but the rest of it was… well, a bit forgettable, to be honest.

The third section, James, focuses on the daily horrors of living under a totalitarian regime, the intense policing of expression punctuated by bombs going off above your head. It’s terrible, of course, but it all kind of blended together. I kept thinking “wait, is this a war memoir, or a literary memoir? What is Nafisi actually trying to DO here? Has she just published her diaries out of order?”.

The last section, Austen, finally returns to the book club and the lives of the women Nafisi chose to teach – so we’re finally back on the timeline that began in the first section. I’d say this is the strongest part of Reading Lolita In Tehran, where we finally get to understand how these books impacted the women who read them, and what their lives looked like in tangible ways (rather than in abstract). They discuss marriages, men, sex, and revolution – like we would at any book club – and the question of whether to stay in Iran, or whether it’s possible to seek their fortunes elsewhere, is at the forefront of it all.

Another constant throughout Reading Lolita In Tehran is the issue of the veil in Iranian society (in various forms, some adopted voluntarily, others imposed by government). Prior to the revolution, women were not required to wear the veil for decades – some women even faced discrimination for doing so. Of course, the revolution and the Iran-Iraq War turned that on its head. I couldn’t help feeling that Nafisi’s seeming obsession with this one facet of life in the Islamic Republic, to the exclusion of so many others, was strange. The veil was not the only way in which the women of Nafisi’s book club were oppressed, and she didn’t go to any great length to explain her focus on it as symbolic or representative of a broader struggle.

I preferred it when Nafisi spoke of the lives of women in ’80s and ’90s Iran as a spectrum, and invited us to understand how literature – and access to literature – became a refuge from tyranny. Books like Lolita and Gatsby represented comfort and safety to Nafisi, and gave opportunity to her students to imagine a different world. That’s what I’d expected when I picked up Reading Lolita In Tehran, but unfortunately I found very little of it.

Naturally, Nafisi copped a lot of criticism – on all sides – when Reading Lolita In Tehran came out. She has been accused of misrepresenting the lives of Iranian people, misrepresenting the intent of the Iranian government, framing Afghan women as “helpless victims”, encouraging Western interventions… basically everything short of seeking to become Ayatollah herself. Nafisi has remained remarkably dignified and, when asked about it, has said only that she’s willing to engage in “serious argument… [but] debate that is polarised isn’t worth my time”.

On the whole, I didn’t enjoy Reading Lolita In Tehran as I read it, but I don’t think that’s the fault of Nafisi or the book. Rather, I think I went in with the wrong set of expectations – perhaps the fault of misleading marketing or inflated reputation. I thought this memoir would revolve solely around the book club, sketching intimate portraits of its participants and their engagement with the forbidden novels. It’s much broader in scope than that, and much more focused on Nafisi’s own experiences and understanding. Read this one, by all means, but perhaps it’s best to adjust your own expectations accordingly.

Nothing But My Body – Tilly Lawless