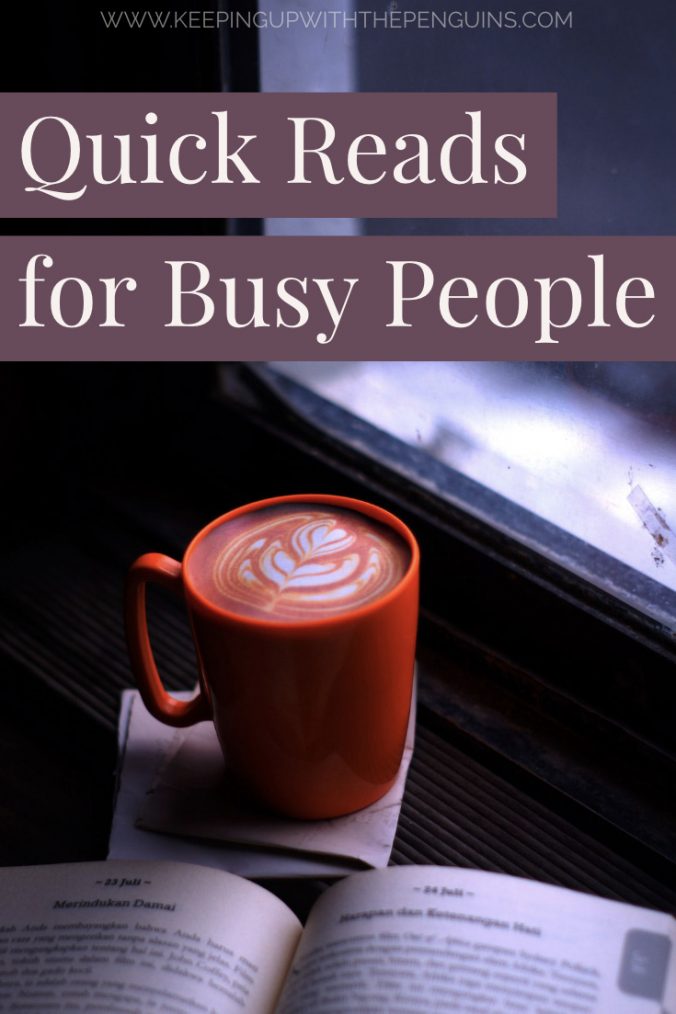 Quick Reads For Busy People: 11 Books You Can Read Fast

Look, reading Don Quixote is a great feather in your cap and all, but let’s be real: most people are very busy, and not everyone has time for a 1000+ page classic. There’s no shame in that! A quick read is always better than no read at all, and sometimes it’s even better than struggling with a doorstop tome that you come to resent. But where to find these quick reads for busy people? That’s why I’m here! I’ve put together a list of 11 books you can read fast.

Now, please bear in mind that a quick read and a short book are not necessarily the same thing. The Great Gatsby and Mrs Dalloway both have fewer pages than some of the books listed here, but I wouldn’t call either of them a “quick” read. The books listed here might be a little thicker, but they’re far easier to digest, and I promise you’ll power through them in no time at all. I have, of course, included the page counts for your reference, but they’ll differ between editions (especially for translated works), and as I said, they don’t really mean all that much.

I was amazed at how quickly I burned through this hippie favourite; I was done in literally just an hour or so. The Alchemist reads a lot like a childhood fairytale or a fable, and I think that’s by design. The language is kept very simple to give the allegorical story maximum impact. It’s about a young Andalusian shepherd who follows his dream of finding buried treasure beneath the pyramids of Egypt. It’ll teach you a lot about the universe and faith and manifesting and stuff (as long as you’re not a cynical snot like me). Read my full review here. Page Count: 163 pp

Short story collections are great when you need something you can dip in and out of, and The Adventures of Sherlock Holmes is one of the classics! It’s twelve fun adventures, but they’re not told chronologically, and the only characters they all have in common are Holmes and Watson, so you don’t need to worry about losing track of character arcs. I don’t think any of the stories are longer than 20 pages or so (from memory), and yet Doyle manages to pack so much into them – his economy of language is masterful! This collection is a Recommended read here on Keeping Up With The Penguins. Read my full review here. Page Count: 307 pp

Honourable mention: the most popular Sherlock Holmes novel, The Hound of the Baskervilles, is another good quick read for busy people. Clocking just 128 pages, it follows the story of an attempted murder inspired by the legend of a supernatural doggo.

It’s lucky that we get to read this one at all, given that it was out of print for nearly 30 years… but Zora Neale Hurston’s story returned to our shelves in 1978, and we should all take the chance to dive in. Their Eyes Were Watching God is a tragic Southern love story, with a lot of wit and a strong female protagonist. It’s also one of the most highly acclaimed novels of the African-American literary canon. Page Count: 264 pp

The Hitchhiker’s Guide To The Galaxy – Douglas Adams

If you’re skipping past this one, rolling your eyes, because you think science-fiction novels are too long and complicated for a busy person like you, STOP RIGHT NOW! The Hitchhiker’s Guide To The Galaxy is more like sci-fi as performed by a British comedy improv troupe, and it’ll take you by surprise. The slim volume is packed with hilarious satire, as it follows the story of Arthur Dent, the only man rescued from Earth’s destruction, and his alien saviour. Plus, there are four sequels in the deliberately-misnamed “trilogy”, so if you find yourself wanting more… Read my full review here. Page Count: 180 pp

All long-time Keeper-Upperers know that I’m a huge fan of Orwell’s Nineteen Eighty-Four, but that’s not a quick read by any stretch. So, here’s the next best thing: Animal Farm, his second best-known novel, which is a little easier on the noggin. You might have heard that it’s an allegory for the Russian Revolution, which is technically true, but makes it sound like a heavier read than it is. In reality, it’s a political satire, a fun one, with farmyard animals and a heaping serve of bitter wisdom. Page Count: 154 pp

Well, technically, this one is a single long-short story, and it’s usually found in a larger collection of Kafka’s works, but there are ways to get your hands on it as a stand-alone volume, so I say it counts! The Metamorphosis tells the story of a man who wakes up to find himself transformed into a giant bug; how compelling is that?! Both terrifying and funny, you’ll burn through this quick read in no time at all (maybe even a single commute!). Page Count: 55 pp

Rumour has it that Robert Louis Stevenson wrote Strange Case of Dr Jekyll and Mr Hyde while under the influence of a considerable quantity of cocaine, so that should give you a good idea of the pace of this classic novel. It’s basically a fantasy thriller, depicting the struggle of two opposing personalities (one coded as “good”, the other “evil”). There are, of course, a hundred different deeply academic interpretations of this story, but even a quick read of the surface story is great fun! (And you’ll finally know what you mean when you describe someone as a “Jekyll and Hyde” character.) Read my full review here. Page Count: 64 pp

I suppose it’s kind of ironic that I’m choosing a play about an interminable wait as one of my quick reads for busy people, but here we are. (It’s the same brand of irony that led me to nominate it as my desert island read.) Waiting For Godot, by Samuel Beckett, is about two mates waiting for the arrival of (you guessed it) Godot, and the conversations they have while they wait. I promise it will move far more quickly for you than it does for them! Page Count: 128 pp

OK, I’ll admit, if you’re really under pressure time-wise, this is probably not as quick a read as the others… but it’s so good, I couldn’t help but include it! The Bluest Eye confronts questions of race, class, and gender, through the story of Pecola Breedlove, a young black girl who desperately wishes for the blonde hair and blue eyes of her friends. You’ll find it hard to believe that this was Morrison’s debut novel (and her follow-up, Sula, is another one to consider adding to your list, too!). Page Count: 224 pp

If you can follow a James Bond movie while simultaneously scrolling through Instagram, this early 20th century spy novel will be a walk in the park. The Thirty-Nine Steps is told from the perspective of Richard Hannay, an ordinary British bloke who finds himself drawn into a German plot to steal crucial military intelligence. It’s like a much, much shorter Don Quixote for this lifetime, and very episodic in form (so, much like a short story collection, it’s easy to pick up and put down). Read my full review here. Page Count: 100 pp

The Guardian called this book “a sublime miracle of wit and brevity”, and a masterclass in “the art of less is more” (i.e., it’s short and it’s fucking good). The Prime of Miss Jean Brodie follows the story of a group of young girls taken under the wing of their controversial teacher, the titular Miss Brodie, who remains defiantly in her prime… even as she ages and one of her chosen few betray her. Read my full review here. Page Count: 160 pp


As you can see, a quick read doesn’t have to mean a fluffy one, by any means! (Not that I’m opposed to a little fluff now and then…) The few pages you cram in on your commute, or when you’ve got five quiet minutes with a coffee (or a wine!), can still have the literary chops. What’s your favourite quick read to recommend to busy people? Tell me in the comments (or join the thread over at KUWTP on Facebook!).

The Hitchhiker’s Guide To The Galaxy – Douglas Adams