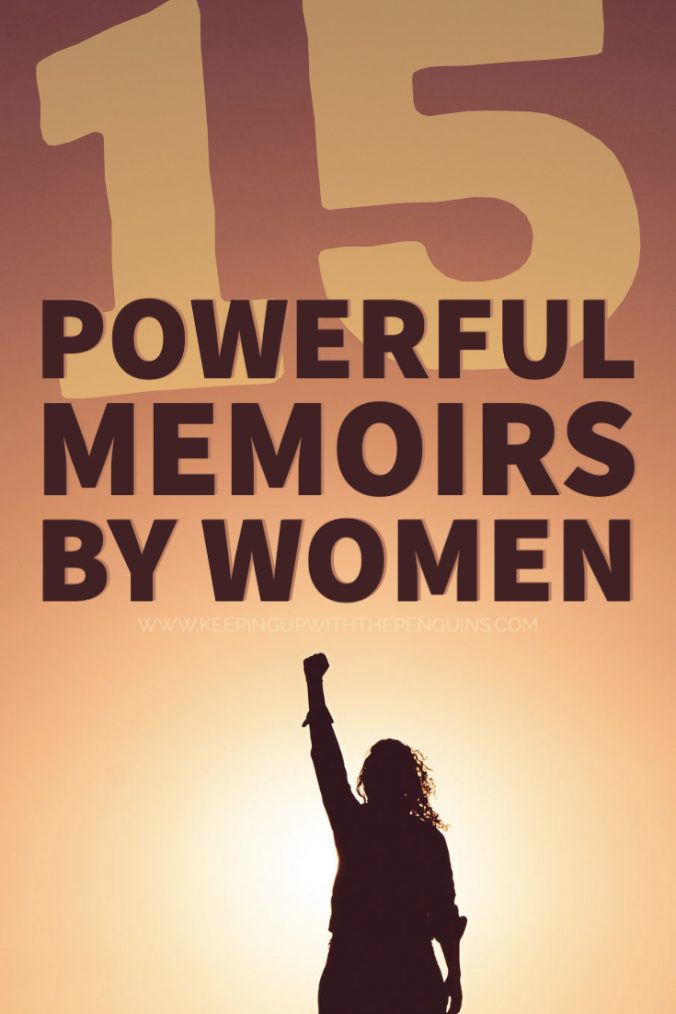 There’s something particularly powerful about memoirs, the way they engage us and put us in another person’s shoes. I recently tried to put together a list of truly great memoirs, and quickly ran into a problem: there’s funny memoirs, niche memoirs, memoirs that make you think, memoirs about travel, celebrity memoirs… I had to narrow it down somehow! I’ll bring a bunch of these recommended memoir reading lists to you over the next few months, but for today, I thought we’d start with 15 powerful memoirs by women.

The Year of Magical Thinking by Joan Didion

Joan Didion is kind of the Madonna of memoir writing. Just when you think her moment has “passed”, she re-invents herself and finds a new way to push boundaries for a new generation. The Year Of Magical Thinking is the book for which she is best known among people my age, an account of the year she grieved after her husband’s very-sudden and very-unexpected death. The way that Didion manages to remain balanced, contemplative, and measured in her writing, all the while showing the reader the true depths of her horror and despair in the depths of tragic loss… truly a masterclass in how memoirs should be written.

Stay Sexy and Don’t Get Murdered is the dual memoir of the hosts of the My Favorite Murder podcast, Karen Kilgariff and Georgia Hardstark. Their radical honesty and complete transparency about their past bad decisions is completely disarming and so refreshing; it makes this memoir double as a how-not-to-make-the-same-mistakes-we-did guide to life. Here are two fierce women who have faced their fuck-ups and come out all the stronger on the other side, and they generously share their hard-won wisdom with us. Read my full review of Stay Sexy and Don’t Get Murdered here.

In The Dream House is an intimate, horrifying, beautiful, defiant, heartfelt, multi-dimensional account of Carmen Maria Machado’s formative – and abusive – love affair with a partner she calls only “the woman in the Dream House”. It honestly changed my understanding of what a memoir could be, and the ways in which one can tell their story. I think this book is destined to become a pillar of the queer literary canon, and on just a single read it became one of my most highly Recommended Reads here on Keeping Up With The Penguins. Read my full review of In The Dream House here.

I Choose Elena by Lucia Osborne-Crowley

You don’t need to be familiar with Ferrante (or any other of the dozens of writers Osborne-Crowley references in I Choose Elena) to find yourself deeply immersed and irrevocably moved by this story. It’s not often that a book will bring me to tears, even less so an extended literary essay/memoir, but this one did (more than once): tears of anguish, tears of fury, tears of gratitude. It has taken me down a rabbit hole of learning more about how our bodies react to, process, and accommodate trauma. I am endlessly indebted to Osborne-Crowley for sharing her story so generously. Read my full review of I Choose Elena here.

Before I opened the cover of Wild, I assumed (from what I’d heard about it around the traps) that Cheryl Strayed was a late-30s suburban mother with a mortgage on a three-bedroomed house in the ‘burbs who abandoned it all to “find herself” on the Pacific Crest Trail. Turns out, at the time of the book’s events, she was actually a mid-20s divorcee with a heroin habit and a transient lifestyle, still reeling in grief from the death of her mother. Strayed defies the cliche with her radical openness and vulnerability about her fuck-ups and missteps, as well as with the circumstances of her life. Read my full review of Wild here.

I Know Why The Caged Bird Sings by Maya Angelou

Maya Angelou had the kind of childhood that would turn most of our stomachs. She was sent to live with her grandmother as a young child, and struggled to reckon with the sting of abandonment at the same time as navigating the horrifically racist waters of the deep South. Then, finally returned to her mother, she was attacked by a much older man. You’d forgive her for being bitter and twisted, but instead this incredible woman turned to love and kindness, and wrote a series of autobiographical books – this being the first, I Know Why The Caged Bird Sings – in which she demonstrates to us the true power and resilience of the human spirit. Read my full review of I Know Why The Caged Bird Sings here.

Your Own Kind Of Girl by Clare Bowditch

Up until a couple of years ago, I (and, I assume, most of the world) knew Clare Bowditch as a singer. Specifically, I knew her as the singer who transitioned into acting for a role in the Australian drama Offspring. Little did I know that inside her was a burgeoning writing talent, and a determination that one day she would be “brave enough – and well enough” to tell her story. That day came with the publication of Your Own Kind Of Girl, Bowditch’s memoir of the forces that shaped her life: anxiety, grief, shame, and compulsion. She shows us how the stories we tell ourselves about ourselves matter, and what happens to us when we believe them.

Maxine Beneba Clarke’s memoir, The Hate Race, starts before she is even born: with her parents’ arrival in Australia. They’re confused by the liquor store manager directing them to the boxes of cask wine. They’re startled by the display of C**n cheese at the local supermarket. When Clarke is born, she’s raised in the middle of white-bread suburbia, complete with Vegemite toast breakfasts and Ford Falcon road trips. Her family is just like all the others that surround them… except for the inescapable fact of their black skin. This powerful memoir will show you the ways that race and racism infiltrate even the presumed safest spaces in our community.

Vale Carrie Fisher. I still can’t quite believe the world has lost her spark. Most actresses, once catapulted to international fame off the back of their hyper-sexualised role in one of the most successful movie franchises of all time, would probably spend most of their lives trying to distance themselves from their on-screen persona. Not Fisher. As you can see here, on the cover of one of her (multiple) memoirs, she appears with her trademark Princess Leia braids, slumped over holding a martini glass. Wishful Drinking is based on her one-woman stage show about life in the spotlight and addiction in the shadows, told with punchy humour and self-deprecating wit.

Bri Lee is one of those scary-smart young women, the kind that you know would kick your arse in any kind of argument (and make you like it). She’s a former law student, a former judge’s associate, and she turned that soul-crushing mind-numbing experience into an incredible memoir, Eggshell Skull. She simultaneously reckons with the ways in which the Australian justice system works against survivors of sexual and gendered violence, and coming to terms with her own experience(s) of assault and harassment. Just when she might’ve been done impressing you, she also released a follow up essay – Beauty – about the immense pressure she felt and faced while promoting her memoir, to be Thin and Beautiful(TM).

Every book-lover can surely relate to remembering and understanding periods of their lives based on what they were reading at the time. For Azar Nafisi, those recollections are perhaps more incredible than most. In Reading Lolita In Tehran, she describes living, teaching, and resisting under the Islamic Republic of Iran government in the late ’80s and early ’90s, framing the story through the books she read with seven other women in a book club she formed. They met at her house to discuss forbidden works of Western literature, Lolita (obviously) among them, as well as Gatsby, and other iconic books and characters. Read my full review of Reading Lolita In Tehran here.

The Argonauts by Maggie Nelson

Few writers have mastered the talent of writing books that weave the intensely personal with the deeply abstract and theoretical, putting philosophy into practice, like Maggie Nelson. In The Argonauts, she uses her own experiences of family, gender, queer identity, motherhood, and personal politics as a prism through which we can collectively examine queerness, gender theory, and sociology. I dare you to find a queer feminist who doesn’t have a copy on their shelves (or who hasn’t been given at least three as Christmas and birthday gifts). Read my full review of The Argonauts here.

If the title of I Am, I Am, I Am sounds familiar, that’s probably because Maggie O’Farrell borrowed it from Sylvia Plath’s The Bell Jar (“I took a deep breath and listened to the old brag of my heart: I am, I am, I am.”). It is a strange contrast, but also oddly fitting, that O’Farrell took an immortal line from a book about the desire to die as the title for her memoir about her own brushes with death, seventeen in total. These near-misses have punctuated and defined her life: the childhood illness, the encounter with a bad man, the birth of her own child… Nothing makes you more grateful for your next breath than O’Farrell reminding you how easily it could be your last.

Magda Szubanski is one of Australia’s most beloved performers, an icon of our screens and of our hearts. She is funny, she is wise, and she never seems to quit: not in the face of endless trolling about her weight, not under the public pressure to stay in the closet, not even when this country was divided over whether or not we should allow same-sex couples to marry (Magda became the beacon of the Yes vote, and won, by the way). But, as the title of her memoir suggests, her strength is born of a serious Reckoning with her past, the trauma and secrets inherited and buried, and what it’s like to be faced with no other choice but to carry on.

Have you ever walked into a room and found yourself gripped by fear, knowing that you didn’t “belong”? That’s happened many a time in many a room for Tara Westover. Rather than letting it cripple her, she has turned her experiences into a perennially popular memoir and book club favourite, Educated. From being raised by her survivalist Mormon family, largely cut-off from the rest of the world and “home-schooled” in their religion, to being the best and brightest at the world’s top universities, Westover has the kind of grit, determination, and passion for life and learning to which we should all aspire. Read my full review of Educated here.

Have you read any particularly powerful memoirs by women lately? Add to this list in the comments below!