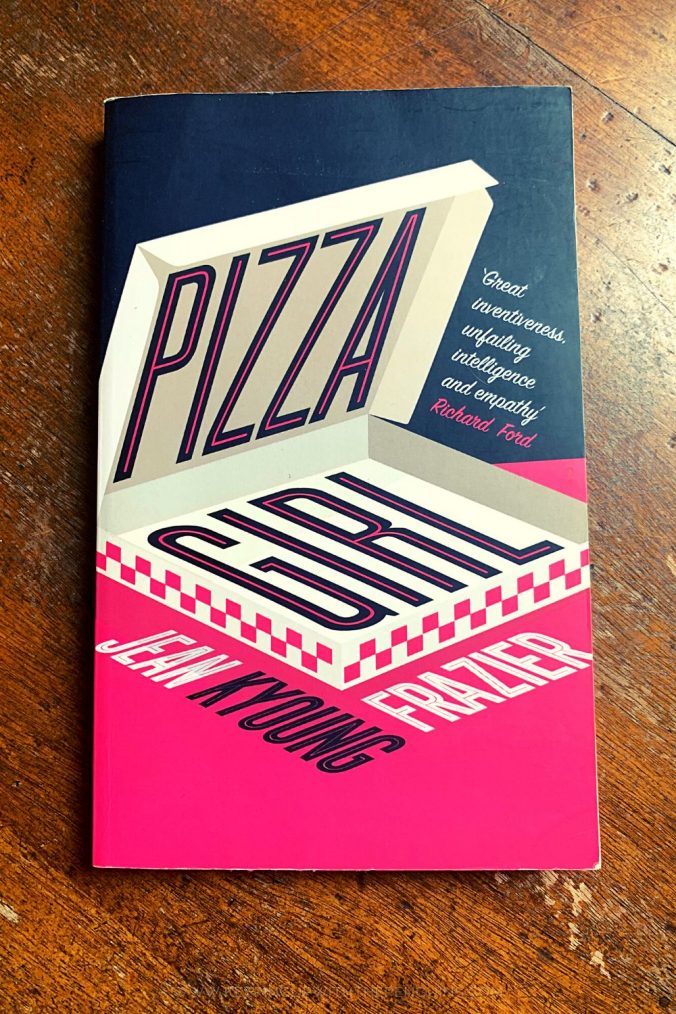 Pizza Girl is one of those broadly underrated books that has a small but very dedicated fan base. I first heard about it on Mandy Shunnarah’s fabulous blog Off The Beaten Shelf, and my curiosity was piqued by the gorgeous cover art. I ended up buying a different edition, not quite as pretty but just as interesting.

Pizza Girl is Jean Kyoung Frazier’s debut novel, a slim little tome that portends great things to come from the young American writer. The story revolves around an eighteen-year-old pregnant pizza delivery girl who becomes obsessed with the stay-at-home mother who phones in a desperate order.

Her name was Jenny Hauser and every Wednesday I put pickles on her pizza.

The narrator remains nameless for most of the novel – her name isn’t revealed to the reader until the very end, and for once I’ll respect the universal rule against spoilers. She’s more than a little lost, with no idea who she is or what she’s doing with her life. That would normally be fine for an eighteen-year-old, except that she’s got a live-in boyfriend and a proud-as-punch mother and a ticking time-bomb in her uterus. Soon, that baby’s gonna come out, and she’s going to have to figure out how to at least pretend to have her shit together.

She’s managing to hold down her job as a pizza delivery driver, though, and that’s something. One afternoon, Jenny Hauser calls, a stay-at-home mother recently relocated to the narrator’s neighbourhood. Her son has peculiar tastes in pizza (pepperoni and pickles – yes, you read that right), and the narrator is the only one who seems willing/able to fulfill Jenny’s order.

Our pizza girl soon falls into a routine of delivering a pepperoni-and-pickle abomination to Jenny’s door every Wednesday, and she becomes strangely obsessed. She joins Jenny’s support group for new mothers, she drives past her house even when she doesn’t have a delivery to make, she imagines whole other lives for the two of them, away from kids and partners and suburbia. What could go wrong?

Pizza Girl is a surprisingly dark story, without being a graphic or explicit one. Here are a few trigger warnings for alcohol abuse, depression, grief (loss of a parent), and kinda-sorta pregnancy stuff.

The main character is equal parts pitiable and frustrating. She just can’t seem to hold it together, and she makes terrible decisions – again and again – that will make you want to clip her ear. But she’s also strangely heroic, staring down the barrel of a life she doesn’t want and doing her best to find a way out of it, so you’ll root for her in that regard at least (probably).

I saw a blurb that likened Pizza Girl to Convenience Store Woman, but that wasn’t the vibe I got from it. The tone reminded me more of Jamie Marina Lau – it’s very Melburnian (even though Frazier is from Los Angeles, the narrator is from Los Angeles, and the whole story is set in Los Angeles). If you liked Pink Mountain On Locust Island, or any other local books in that vein, I’m pretty confident Pizza Girl will be a winner for you.

I quite enjoyed it, even though it left me wanting more – all the really good pizzas do!