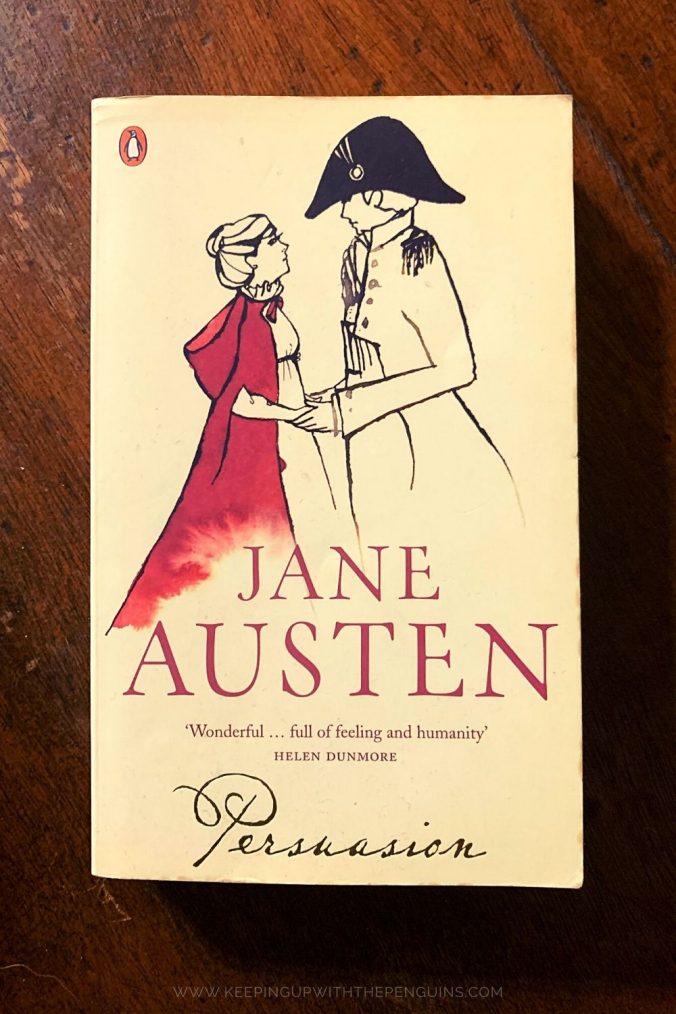 I’d decided that Persuasion was going to be my next Austen read even before that trailer dropped, but it was a helpful reminder to hurry up. Before it was a Dakota Johnson rom-com, it was Austen’s last completed novel, written “in a race against her failing health in 1815-16”.

So, apparently, Persuasion was at least partly inspired by Austen’s own brother, Charles, who bore a lot of similarities to the leading man Captain Wentworth. According to scholar Sheila Johnson Kindred: “both began their careers in command of sloops in the North America station at about the same age; both were popular with their crews; both progressed to the command of frigates; both were keen to share their prize money with their crews, though Captain Wentworth ended up considerably richer as a result of his prize money than did Captain Austen”.

Another fun fact: Persuasion was the first Austen novel to feature an older woman in the lead. (Well, she’s twenty-seven, but by Regency standards that’s practically ancient.) Some Austen academics have drawn the conclusion that this shift, towards older protagonists, was a reflection of Austen’s own age (see above: careening towards death) and her desire to challenge the notion that a woman’s life was over if she didn’t marry before her wisdom teeth came in. One of her biographers, Claire Tomalin, called Persuasion Austen’s “present to herself, to Miss Sharp, to [her sister] Cassandra, to Martha Lloyd…to all women who had lost their chance in life and would never enjoy a second spring”.

So, we’ve got an “elderly” leading lady in Anne Elliot, and the charismatic captain Frederick Wentworth, who has successfully climbed the career ladder. Now that we’ve met the players, lets see what it’s all about.

Persuasion is basically the O.G. second-chance romance. Anne and Fred were engaged to be married back in the day, but she was pressured into dumping him by her snooty family and friends – and she stayed sad about it for ten years. Now, her family and friends are considerably less snooty (in bank balance, if not in attitude) and facing a significant reduction in circumstances when Fred comes back to town. It would seem he’s been living his best life without Anne, and she is MORTIFIED.

It hardly constitutes a spoiler to say they end up together (fight me), but we take many a long and winding road to get there. Fred spends a lot of time ignoring Anne and flirting with her in-laws, Anne’s cousin comes out of the woodwork and sets his sights on her, there’s a near-fatal head injury and plenty of dinner parties.

Persuasion is much darker than Pride And Prejudice or Emma. Austen was so scathing, such a savage, that at times I literally covered my mouth as I was reading. There’s not as much of the sparkling dialogue; it’s far more introspective, and I suppose that’s why it seems meaner (even today, in the age of Twitter, we all think things we wouldn’t dare say out loud). I found it harder, too, to keep track of all the characters and their relationships to one another – perhaps as a result of their minimal on-page interaction.

I think, like much of Austen’s work, Persuasion has a slow-burn effect. I can’t say it blew me away at my first reading – but nor did any of her others. Over time, though, I’ll find myself thinking about it more and more, and referring back to it more and more, and before I know it I’ll be a convert. (Hopefully not before the new adaptation comes out – I want to be able to enjoy it without poking holes.)

Persuasion is really one for the true fans, often too severe to be funny (and occasionally fat-shamey, by the by) and subtle in its treatment of quite dramatic turns. I wouldn’t recommend starting out with this one, if you’re new to Austen, but if you’ve already read her others, you’re well placed to give it a go.

My favourite Amazon reviews of Persuasion:

Books Made Into Movies, Classic