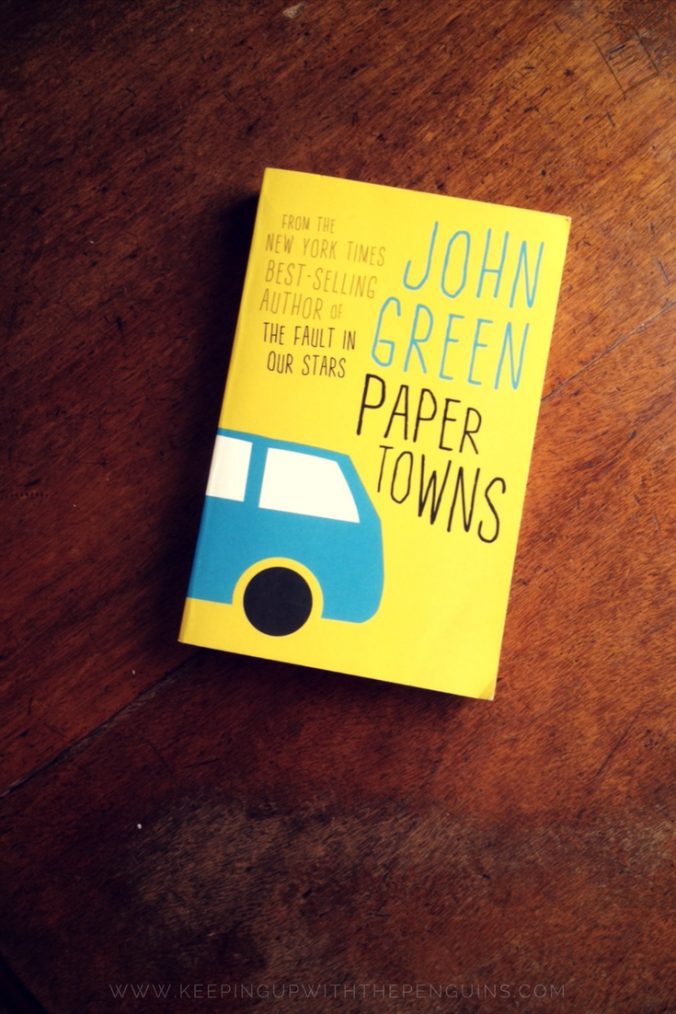 Paper Towns debuted at #5 on the New York Times Bestseller List in 2008, it won the Edgar Award in 2009 for Best Young Adult Novel, and just about every YA-reader I know has a major stiffy for Green. So, I figured it was worth a look, even though YA isn’t usually my ‘jam’.

Margo goes missing, and Quentin goes looking for her, following her trail of clues. You have to suspend your disbelief for a minute here. I mean, I’ve never met a teenager with enough foresight to leave complex metaphorical breadcrumbs when they run away, and, indeed, why would they? The whole point of running away is, y’know, to not get caught. Still, that’s what Green chose for a plot, and I’m hardly in a position to argue with him.

There were some surprisingly clever and funny bits. I laughed out loud at the story of local figure Dr Jefferson Jefferson, who is actually not a doctor of any kind – he’s just a powerful, wealthy man who petitioned the courts to change his first name to “Dr”. That’s funny, right?! So I keep reading along, chuckling away… until we hit the first speed-bump of self-indulgent teenage wankery. Quentin opines:

Red flag, readers: our narrator is definitely a Nice GuyTM.

Q’s (brief) moment of redemption doesn’t come until about two-thirds of the way through the novel (by which point I’d already written him off). He realises that Margo isn’t just a vessel for all of his dreams and desires – she’s an actual person, would you believe it? And he’s not subtle about it, either. He really thwacks you over the head with this life-changing realisation.

It was a lovely moment (I guess), but then the selfish teenage arsehole characters went back to acting like selfish teenage arseholes. Q skips his high-school graduation (and somehow convinces his friends to do the same), despite the fact that he is an only child and his parents are so excited and proud of him that they bought him a car. He uses that very car to drive across the country chasing after the girl, risking life and limb, with nary a thought to his heartbroken parents… only to find that she’s absolutely fine and, well, that’s kind of the end.

It’s not all terrible, though. I wasn’t a huge fan of the characters or the plot, but the “paper towns” trivia was pretty fun and it made a nice little backdrop for the story. If you’re wondering: the idea of a “paper town” is actually an old cartography trick. Basically, if you’re designing a map (back in the days before Google had Street View), you’d sneakily add in an extra fake town in a random spot. It was an early form of copyright protection. If a cartographer saw their secret fake “paper town” on another map, they could be fairly certain that the designer had copied their design without permission. Clever, eh? Green confirms in his author note that the paper town he references in the book, Agloe, is actually real:

“Agloe began as a paper town, created to protect against copyright infringement. But then people with these old Esso maps kept looking for it, and so someone built a store, making Agloe real.”

But aside from the fun trivia (and the lols in the beginning), I didn’t find all that much to love about Paper Towns. I think Green tried to play with “dark” themes too much. He was a bit heavy handed with the death stuff (that’s him “having his cake”), but then he wraps it up very neatly in an alarmingly benign ending (and that’s him “eating it too”). The monologuing in the closing chapters was extremely tedious; it felt like very lazy storytelling. I had to keep reminding myself that I’m a bit older than the target market; maybe today’s young adults like having everything teased out in dialogue, to feel like the story has a resolution?

Bonus fun fact: Paper Towns was apparently, like all good books, banned from a U.S. school in 2014 because a local parent “disapproved of the book’s sexual content”. A few high-school boys occasionally whined about being virgins, which is enough to make anyone clutch their pearls, I’m sure. The National Coalition Against Censorship had it reinstated shortly thereafter.

My tl;dr summary of Paper Towns would be this: two kids living in no-one-gives-a-fucksville get their kicks running around doing dumb shit, until the mysterious unattainable girl runs away and the boy next door (who “loves” her) chases her across the country. Paper Towns is great for younger teenagers, but will probably grate the nerves of anyone who has already finished high-school.

My adventures with John Green best-sellers doesn’t end here. Check out my full review of The Fault In Our Stars.