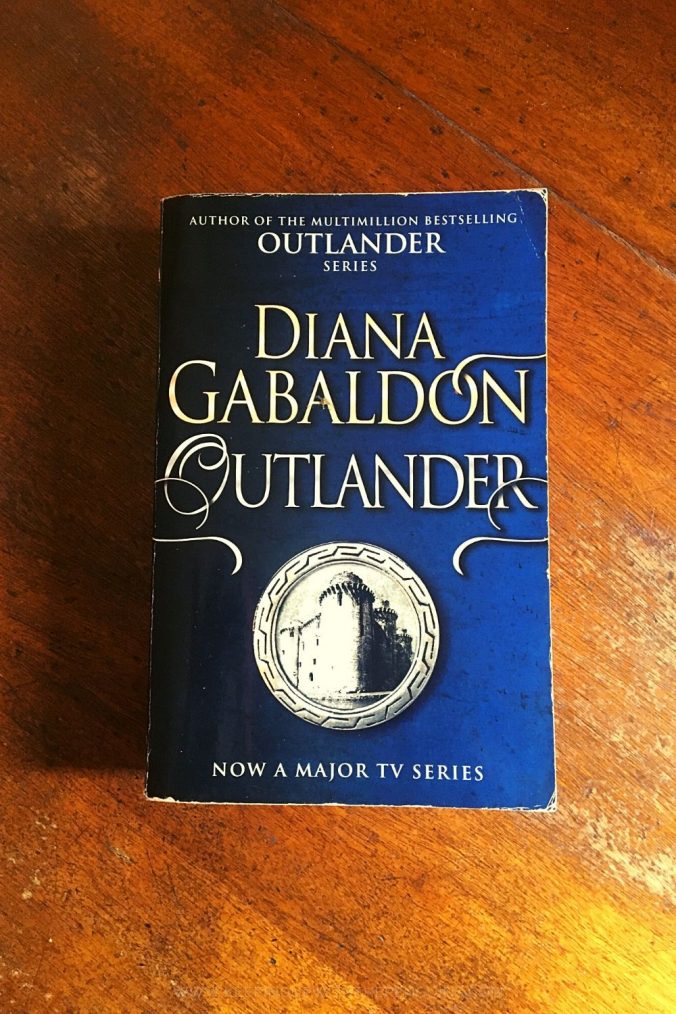 Imagine popping out for an afternoon stroll. You leave your loving husband to do his little family tree hobby, and wander around looking at interesting plants. You get closer and closer to some big rocks, and notice one of them with a hole down the middle seems to be buzzing. Screaming. You topple through the gap and find yourself 200 years in the past, dazed and confused and staring down the barrel of your husband’s ancestor’s pistol. That’s what happens to Claire Beauchamp in the first hundred pages of Outlander – and there are still seven hundred pages to go!

Outlander is a time travel-historical romance, previously published as Cross-Stitch. Diana Gabaldon sat down about thirty years ago to have a go at writing a novel “for practice” – y’know, just for fun – and this is the result. Her test run has been published in 38 different languages, sold over 25 million copies around the world, and it’s been adapted into a highly-acclaimed television series.

It’s a CHUNKY book, as I alluded to just a second ago – 868 pages in my edition. In retrospect, it would have made a good lockdown read (so if we have to live through another once-in-a-century pandemic, be sure to put Outlander on your nightstand). As it turned out, I ended up reading it while I was laid up with a rotten cold, so I suppose the experience was mostly the same.

Back to the story: our girl Claire was an army nurse, and was happily beginning her post-war life with hobby genealogist Frank Randall in 1946 when she tumbled through the wormhole. Post-tumble, she’s in 1743 Scotland, and has to think double-quick to escape the clutches of Frank’s great-great-great-great-(great-great??) grandfather Captain Jack Randall. Luckily, a Scottish clansman, the dashing Jamie Fraser, rides in to the rescue and knocks the bad guy out so she can scarper.

Now, the logic of Outlander gets a bit convoluted, but to boil it down to its bare bones: Claire is English, but the clansmen trust her, and she ends up having to marry one of them (Jamie being the obvious choice) because the English Captain can’t arrest a Scot (even a Scot by marriage) on their ancestral lands.

Poor Claire ends up caught between two lovers and timelines. At first, she’ll do anything to get back to her own time and to Frank, but the longer she spends with her husband-by-convenience, the hotter she gets for him and the more at-home she feels in her new era. Jamie keeps being all dashing and rescuing her from hard scrapes, plus he’s pretty good at the obligatory marriage consummation, so you can understand her trouble.

The plot of Outlander is episodic, very Quixote-esque. It’s one damn thing after another, and a lot of traipsing from place to place to escape whatever trouble they’ve gotten themselves into. They still manage to make time for plenty of sex, though, naturally. It’s not a closed door romance, but the door isn’t wide-open either – it certainly wasn’t as steamy as I was expecting.

What concerned me was the romanticised violence. There’s a lot of “men beat their wives because they love them” kind of stuff, worked up to be some kind of passionate declaration of devotion (ew), and a lot of violence as vengeance for slights – real or perceived – against a woman’s honour (double ew). So, if that’s something that bothers you, you might want to give Outlander a miss.

The gay characters also made me raise my eyebrows a bit. Gabaldon doesn’t offer particularly positive queer representation. The only gays are villains, and there’s more than one instance (including one particularly extended and graphic instance) of queer men raping straight men. That said, given that it’s a historical romance set in the 18th century and written in the late ’80s/early ’90s, the presence of gays at all is unusual and commendable to some extent.

Oh, and there’s a few instances of casual ableism and racism, too. I know, I know, Outlander is “of its time”, but you know what? We’re reading it in 2021 and we should at least acknowledge that we know (or should know) better now.

The only other heads-up I’ll give is that the story takes some very strange turns in the last hundred pages or so. There’s a lot of religion, a bit of witch magic, and I think some kind of twisted not-at-all-recommended form of self-administered amateur exposure therapy? Nevertheless, Gabaldon manages to wrap everything up in a way that feels satisfying but definitely paves an inviting path for the sequel.

Ah, the sequel! And the one after that! And the one after that! There have been nine of ten planned Outlander books published now (most recently, Go Tell The Bees That I Am Gone in 2021), as well as several novellas, short stories, and a whole other series (the Lord John books) telling accompanying stories. It’s now one of the best-selling book series of all time. Not bad for a book written for practice about a girl who takes a walk, eh?

My favourite Amazon reviews of Outlander:

Books Made Into Movies, Fantasy, Romance