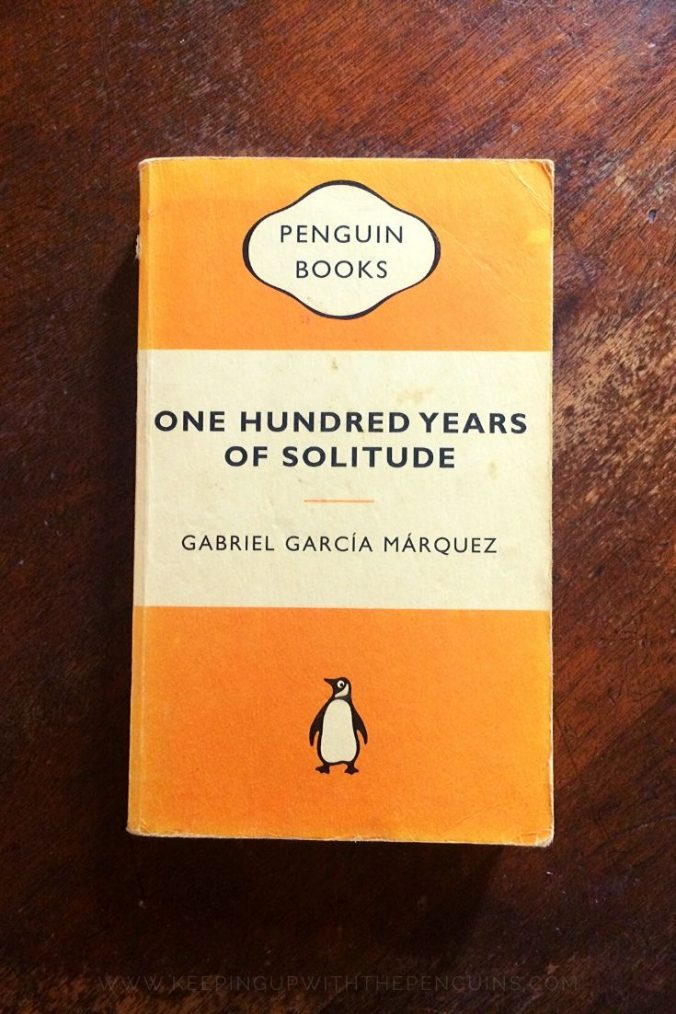 Much like a piano player in a bar, on occasion I’ll take requests – and I can’t think of a book review that has been requested more often by more Keeper Upperers than One Hundred Years Of Solitude by Gabriel García Márquez. This landmark novel was first published in García Márquez’s native Spanish (as Cien años de soledad) in 1967, and this edition was translated into English by Gregory Rabassa. Here we go…!

One Hundred Years Of Solitude covers seven generations in the life of the Buendía family (don’t worry, there’s a helpful family tree in the front of most editions if you lose track of who’s who along the way). It has a cracker of an opening line – the famous one about Colonel Buendía facing the firing squad – that echoes throughout the story, like a drawn-out version of a life flashing before your eyes.

The story really begins, however, with the patriarch of the family, José Arcadio, deciding to move his family out of their hometown after an… unfortunate incident (he stabbed a mate at a cockfight, over some nasty accusations of limp dick). The family settles by a river and establishes the town of Macondo, which José Arcadio envisages as a “city of mirrors”, a paradise for his growing brood.

The town remains isolated, almost entirely disconnected from the world, save for a band of gypsies (I don’t know if that’s cool to say or not, but that’s the word García Márquez used so that’s what I’m going with) who visit them each year. They come to hawk their incredible technologies – magnets! Telescopes! Ice! And José Arcadio is more than willing to hand over every dollar he has for their gizmos and gadgets.

In fact, José Arcadio goes full mad scientist, trying to figure out how to save the world with magnets, while his wife – Ursula – simply has to put up with his bullshit, for lack of any other option. She keeps the kids fed and the clothes clean and the house in order, while José spirals deeper into his delusions.

Joke’s on him, though: in the end, he invents squat, while his long-suffering wife lives to be well over 100 years old, reigning over six of the seven generations of Buendías. This brings me to what I consider to be the central moral or message of One Hundred Years Of Solitude: men are stupid, and it’s always up to the women to clean up the mess.

“They’re all alike,” Ursula lamented. “At first they behave very well, they’re obedient and prompt and they don’t seem capable of killing a fly, but as soon as their beards appear they go to ruin.”

One Hundred Years Of Solutide (156)

Oh, but that’s not all! García Márquez has more than one row to hoe. Bureaucracy is from the devil. War and jealousy are pretty bad, too. A propensity towards sex with your sisters and cousins will probably end in tears (it turns out Game Of Thrones didn’t invent incest, who knew?).

It’s all this in-family rooting that seems to be the cause of most of the Buendías’ troubles. Ursula and José were cousins before they were married, and their kids inherited both their fondness for other branches of the family tree and their fear that their family will be supernaturally punished for these abominations. The recurring example is the Buendía cousin who was born with a tail; he bled to death and died after asking his butcher mate to chop it off, because he was worried he wouldn’t be able to lose his virginity if girls kept laughing every time he pulled his pants down.

That’s an example of the “magical realism” we’ve all heard so much about. Mostly, One Hundred Years Of Solitude is grounded in recognisable reality – there are people and they have problems that have a tangible worldly basis. But, now and then, weird stuff happens. García Márquez blurs the line between the literal and the metaphorical. People are born with tails. Ghosts hang out in your backyard. A beautiful woman levitates off her bed and straight up into the sky, never to be seen again. All of this is accepted as normal (or, if not normal, at least not all that mystifying) by the characters involved. The banality of these magical events is reinforced by the narrator’s lack of interest in them, too – they are related in the same tone as one might describe what they had for breakfast.

And circling back around to the incest for a minute (c’mon, you didn’t think I could leave it alone for long, did you?), it seems to me to be a way of manifesting two of the major themes of the book: solitude (duh), and the cyclical nature of time. Because the town the Buendías founded and inhabit is so isolated, they really don’t have much choice but to start boning down with others in the same gene pool. And that’s why they see the same problems, the same dramas, the same events playing out time and time again, too.

In the end, it probably won’t surprise you to learn that Macondo (and, by extension, the Buendía family) falls apart. The last surviving son discovers a manuscript left behind by one of his forebears, which depicts all of the family’s struggles and triumphs. Meanwhile, a wild wind whips up and away all remaining traces of the town that they founded.

Reading One Hundred Years Of Solitude is a lot like listening to a drunk person tell you a story when you’re five pints deep yourself. It’s sprawling, and tangential, and you can be sure they’re taking a bit of creative license, but you can still follow what they’re saying and you’re curious enough not to excuse yourself to go to the bathroom mid-sentence and never return. There’s not much tagged dialogue (as in “blah blah blah”, he said), and the timeline feels fluid and circular, so it really does read as though the story is being told to you second-hand. It’s not unenjoyable, but it’s not a straightforward story, either.

One Hundred Years Of Solitude, in the fifty-odd years since its release, has been translated into over forty languages and sold over 50 million copies. It’s widely considered to be García Márquez’s magnum opus, the shining jewel in the crown of the Latin American literary boom of the ’60s and ’70s. When García Márquez won the 1982 Nobel Prize for Literature, One Hundred Years Of Solitude was widely touted to be one of the main reasons why. It is now recognised as one of the most significant books of the Hispanic literary canon, and a survey of international writers deemed it the book that has most shaped world literature.

(If it’s so good, why hasn’t it been made into a movie? Find the answer here.)

So, what’s the verdict? I didn’t love-love-love it, but I didn’t hate-hate-hate it, either. I wouldn’t breathlessly thrust it into the hands of a fellow booklover, but I wouldn’t crinkle my nose if they picked it up of their own accord. I’m going to reserve my judgement on García Márquez until I’ve read more of his work – I’ve got my eye on Love In The Time Of Cholera next…

My favourite Amazon reviews of One Hundred Years Of Solitude: