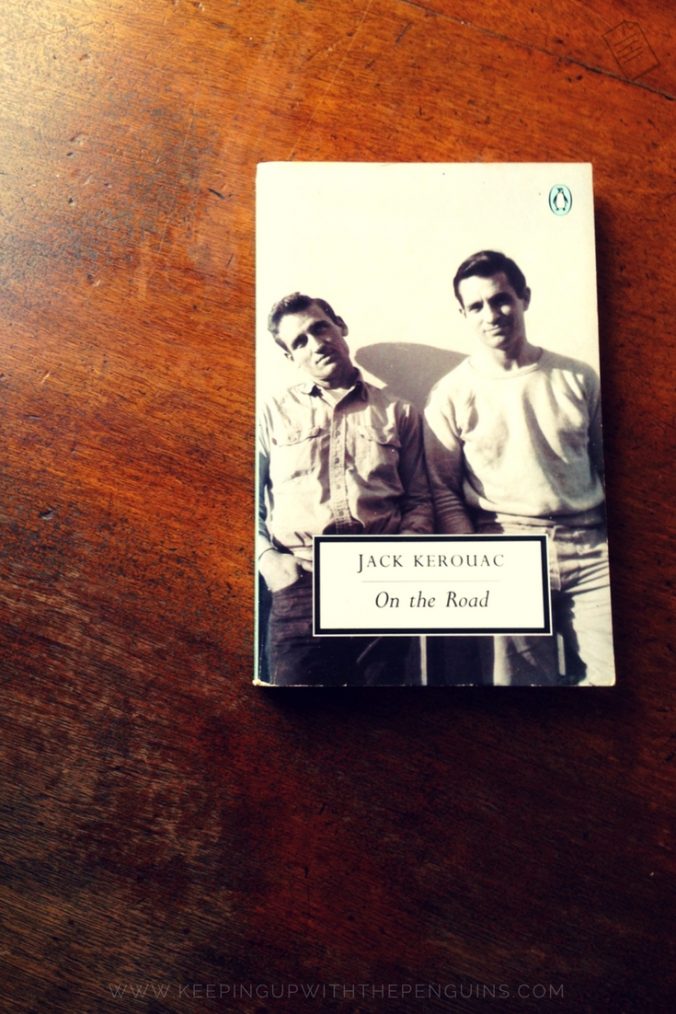 On The Road – Jack Kerouac

It’s certainly the season for dramatic gear shifts. I’ve gone from hyper-masculine military memoir American Sniper, to subtle 19th century social satire Emma, and now on to the quintessential American road trip novel: Jack Kerouac’s On The Road. It’s never boring keeping up with the Penguins, I tell ya!

On The Road is based on the 20-something Kerouac’s travels across the United States in the years following WWII. In fact, it’s more than “based on”: it’s basically a true story with a bunch of fake names to protect the guilty.

Kerouac spent years scrawling drafts in various notebooks before finally gritting his teeth and sitting down at his typewriter. He spat out the entire thing on a single scroll of paper. Yes, you read that right. The original scroll stretched over 120 feet (and it sold in 2001 for $2.43 million).

By the time the book was finally published in 1957, Kerouac was thirty-five years old. Critics have said that Kerouac spent the first half of his life struggling to write On The Road, and the second half of his life trying to live it down.

What did he have to live down, exactly? On The Road went gangbusters upon its release, after all. The New York Times called it “the most beautifully executed, the clearest and the most important utterance yet made by the generation Kerouac himself named years ago as ‘beat’, and whose principal avatar he is”. That’s a rave review right there! But Kerouac learned quickly that coining the name of a generation, and being their “avatar” no less, ain’t all beer and skittles. Interviewers badgered him with constant questions about “Beat” culture, and showed relatively little interest in his actual work. As you can imagine, Jack got jack of it pretty quickly (ha!).

I’d heard of the “Beat generation” before I sat down to read On The Road, but couldn’t have told you a damn thing about it. Luckily, On The Road is basically a crash course for-dummies guide, so I’m all across it now. The Beat generation was a literary movement that emerged in the late ’40s and early ’50s. Kerouac and his buddies (on whom the characters in On The Road are based) were basically the Tumblr kids of their day. The Beat generation were characterised by their rejection of traditional values (especially the materialism underpinning American culture at the time); as such, they’re well renowned for their spiritual quests, their drug use, and their raunchy sex lives.

On The Road follows the narrator Sal Paradise on a series of hodge-podge journeys back and forth across the United States. Sal is a pretty flawed human; he lacks any real conviction, he drinks a little too much, and he has terrible luck with women. Still, despite his shortcomings, he had a certain chutzpah that I admired. He certainly wasn’t too proud to ask his aunt or friends for money. There was no machismo bullshit, which felt like a breath of fresh air when it comes to young white male characters.

Part One (1947) covers Sal’s first trip from New York to San Francisco (via Denver), and back again (via Bakersfield). He’s basically just looking to party on with his friends across the country. He’s particularly keen to hang out with the other central character, free-spirited maverick Dean Moriarty. Sal also ends up having a brief dalliance with a Mexican girl named Terry on the return journey, but he abandons her to carry on home. Like I said, he’s not exactly a stand-up guy.

Part Two (1948) begins with Sal in Virginia. Dean comes to join him, and from there they drive to New York, then to New Orleans, then to San Francisco. They make friends and party with people all along the way, and the trip ends with Sal taking the bus back to New York once more.

In Part Three (1949), Sal takes the bus from New York to Denver, then trudges on to meet up with Dean (who is having serious woman troubles) in San Francisco. Together, they bounce around the country a bit (Sacramento, Denver, Chicago, Detroit), dreaming up hair-brained schemes that never quite pan out. They eventually return to New York, where Dean knocks up a(nother) girl. It was around this point that I figured out the Beat generation actually invented Uber. Seriously: Sal and Dean travel the country using ride-sharing programs organised by the travel bureaus of each city. Who knew?

Anyway, Part Four (1950) sees Sal leave Dean (who is now living an almost-normal domestic life), and take a crazy bus journey through Washington D.C., Ashland, Cincinnati, and St Louis, before meeting up with a different friend (Stan) in Denver. Dean quickly ditches his new life, and comes to join them in a beat-up old car. The three of them drive it across Texas and down into Mexico, where they party on until Sal gets dysentery. It’s a major buzz-kill. Dean ditches him there, which is not very neighbourly of him, but sadly not out of character.

The final section of On The Road, Part Five, is only a few pages long. Sal has recovered and returned to New York. He has settled down with a new wife (Laura). They plan to move to San Francisco together, but Dean shows up and fucks with their plans. The story ends with Sal’s sensible friend (Remi) refusing to give Dean a lift across town. Sal gets a bit wistful about it, the end.

If you were able to bear with me through that summary, well done. If you struggled, be warned that you might struggle following the book as well. The writing is pretty frantic, in line with Kerouac’s dedication to a style of “spontaneous prose” (i.e., he types out whatever comes off the top of his head in the moment, and all editing can go to hell). It’s worth muddling through, though, for the character sketches, which are absolutely sublime:

Marylou was watching Dean as she had watched him clear across the country and back, out of the corner of her eye – with a sullen, sad air, as though she wanted to cut off his head and hide it in her closet, an envious and rueful love of him so amazingly himself, all raging and sniffy and crazy-wayed, a smile of tender dotage but also sinister envy that frightened me about her, a love she knew would never bear fruit because when she looked at his hangjawed bony face with its male self-containment and absentmindedness she knew he was too mad.

My favourite character in On The Road was actually one of the bit-players: Sal’s aunt. She puts him up whenever he’s bored of catching busses, and she sends him money whenever he asks. To put it another way, she puts up with all his bullshit without complaint, but commands enough respect that Sal really cares about her opinion of him. He says of her: “My aunt once said that the world would never find peace until men fell at their women’s feet and asked for forgiveness”. That line really stuck with me, more than anything else from On The Road, and I’ve used it at least a dozen times since. It seems particularly poignant given the global revolt against “Weinstein culture” over the past 18 months.

On The Road is to the Beat generation of the ’40s and ’50s what The Sun Also Rises was to the Lost generation of the ’20s. You’ll often see them compared, held up side-by-side. I’m going to plant my flag and say that On The Road was the better of the two, because to my mind it presented a far more self-aware and nuanced treatment of masculinity. I can see why American beatniks and hippies loved it to death, but for me it was just okay. Check it out if you like crazy roadtrips and don’t mind listening to people ramble when they’re high.

Still shaking your head in disbelief picturing Kerouac hunched over his typewriter with that huge scroll? Check out my list of the most bizarre writing methods of successful authors here.

My favourite Amazon reviews of On The Road:

What Do Your Bookshelves Say About You?