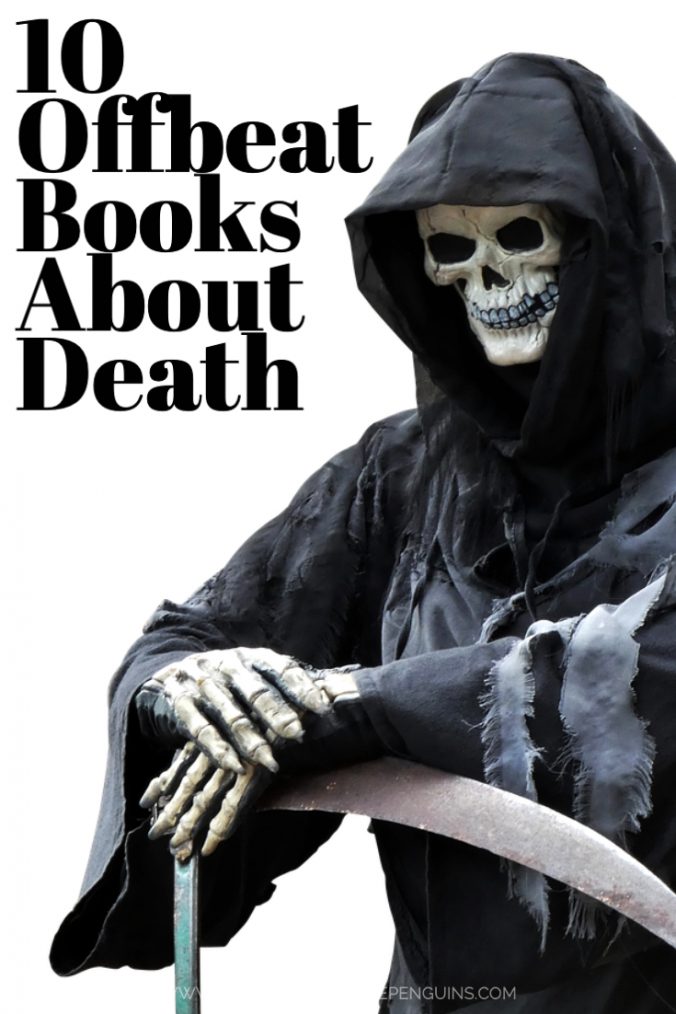 Death is the only certainty in life (apart from taxes, obviously). And yet we find it really difficult to talk about! That’s where books come in. In books about death, we can explore ideas and scenarios and solutions that we might not feel comfortable bringing up with friends and family. There are a lot of self-help-y type books around on dealing with death and grief, and there are as many (more!) fiction books that feature a significant character’s untimely passing, but my favourites are the slightly more offbeat books about death. Here are ten of the best…

The Morbids by Ewa Ramsey

Everyone’s afraid of death, at least a little bit, but Caitlin fears it more than most. She silences the Thoughts by plunging headfirst into any and every distraction: walking, work, booze, boys… When she finds out her best friend Lina is getting married, though, she realises none of it will be enough. She’s going to have to tackle her demons for real. That’s why she joins meetings of The Morbids every Tuesday, a support group that promises “a unique first-step program for treatment of anxiety, specifically as related to death and dying”. The Morbids is a strange, sparkly novel, a romantic comedy about death and the ways we cope. Read my full review of The Morbids here.

The Little Prince begins with the narrator describing grown-ups, specifically their natural inability to perceive or understand the things that are truly important. It’s a sweet beginning, and you’d be forgiven for thinking that you’re in for a fluffy story aimed at the under-six set. In fact, this is a deeply moving parable about death and friendship, which concludes (spoiler alert) with the death of the narrator’s possibly-imaginary-but-real-in-his-heart friend, the titular Little Prince. It’s an incredibly moving story, one unlike any I’ve read in contemporary children’s books, and it’s full of aphorisms. This would be the perfect book about death to help adults and children move through the issue together. Read my full review of The Little Prince here.

The Weekend by Charlotte Wood

When I recommend The Weekend, I usually describe it as a book about the vitality of older women. Looking at it from another vantage, though, it’s a book about death that brings three vital older women together. I suppose you could consider it the archetypal story of aging: your life and passions continue, but inevitably your nearest and dearest will pass, and you’ll have to reckon with a life in their wake. This is a brilliant Australian novel about friendships, memory, and connection, set over the course of a single weekend, and predicated on that oft-unacknowledged fact of life: cleaning up what is left behind by those who have passed. Read my full review of The Weekend here.

and my heart crumples like a coke can by Ali Whitelock

It’s difficult for me to review or describe and my heart crumples like a coke can with impartiality, because Ali Whitelock is a dear, dear friend of mine. With that in mind, believe me when I tell you that this is one of the most incredibly relatable poetry collections you will ever have the privilege of reading. Whitelock’s relationship with her father – as dissected in this collection, as well as her brilliant memoir Poking Seaweed With A Stick And Running Away From The Smell – is complicated to say the least, and yet his passing is depicted with the pathos, dark humour, and devastation experienced by all who have lost a parental figure.

The Book Thief by Markus Zusak

For countless young adults, in Australia and around the world, The Book Thief is their first emotional connection with the Holocaust (back in my day, it was The Diary Of A Young Girl, but I suspect that’s fallen out of favour given this one’s perennial popularity). Narrated by Death, as a personified character, it makes the horrors of World War II tangible for youngsters, and probably quite a few adults as well. As far as books about death go, obviously it’s written to pull on your heartstrings, but it’s also a uniquely accessible post-modern approach that will ventilate grief for readers of all ages. Read my full review of The Book Thief here.

A Grave Friend is pretty much a black comedy take on Cats In The Cradle, with a more optimistic ending. Jason Edward Harris takes a laughably macabre subject matter – the discovery of a dead body – and, alongside gorgeous watercolour illustrations by the incredible Kyla Hayes, turns it into something beautiful. Corpse Carl meets a gang of kids that will change his life (or death, as it were). This is one of those books about death to pick up when you can’t tolerate a treatise, when you need to look at something beautiful and remember that the devastating and the uplifting can exist side-by-side. A must-read for fans of Max Porter’s Lanny!

“Raw” is an over-used word for honest and forthright stories about sex and death, but that’s exactly what New Animal is: it’s the steak tartare of literature. Amelia is the cosmetician in her modern family’s funeral parlour, “well known in this town full of retirees and clumsy tradespeople” (ha!). She also likes to de-stress from her days of dressing corpses with the company of young men (ahem). Baxter could have easily veered into the smutty or the maudlin (or both!) with such a story, but she balances her unique brand of dark comedy with expertise that belies her early career status. I recommend this above all books about death for twenty-somethings experiencing it for the first time. Read my full review of New Animal here.

The Year Of Magical Thinking by Joan Didion

Okay, maybe this doesn’t strictly fit the books about death brief, but whenever someone asks me for a book about grief, the first one that springs to mind is The Year Of Magical Thinking. Joan Didion is kind of the Madonna of writing. Just when you think her moment has “passed”, she re-invents herself and finds a new way to push boundaries for a new generation. This is the book about the fall-out from her husband’s very-sudden and very-unexpected death. She manages to remain balanced, contemplative, and measured in her writing, all the while showing the reader the true depths of her horror and despair in the depths of tragic loss… truly a masterclass in how memoirs should be written.

The Love That Remains by Susan Francis

Francis openly admits her obsession with finding (and writing about) the truth. The Love That Remains is her memoir in which she finds it, over and over again. With her adoptive mother declining in late-stage Alzheimer’s, she went looking for answers about her past. Along the way, she found Wayne, the love of her life. It should have been a happy ending… but for Wayne’s untimely death. Francis discovers new truths that challenge everything she thought she knew about the man she married. She’s forced to confront uncomfortable questions: how well can we ever really know a person? Where are love’s bounds? This is the perfect read for fans of Liz Gilbert. Read my full review of The Love That Remains here.

As I Lay Dying is, if nothing else, a slow burn. At the time of reading (mostly at my husband’s urging), I wasn’t all that impressed. And yet, I find myself referring back to it more and more as time passes. That’s partially because the chapter written from the perspective of the titular dying character is one of the best men-write-women pieces I have ever read. But also, it’s because this is an incredible meditation on a family’s grief, disguised as a Southern gothic. Every character, from the husband through to the youngest child, gets a say, and each of them offers a unique insight into what Addie’s death means. Read my full review of As I Lay Dying here.

Mother May I – Joshilyn Jackson