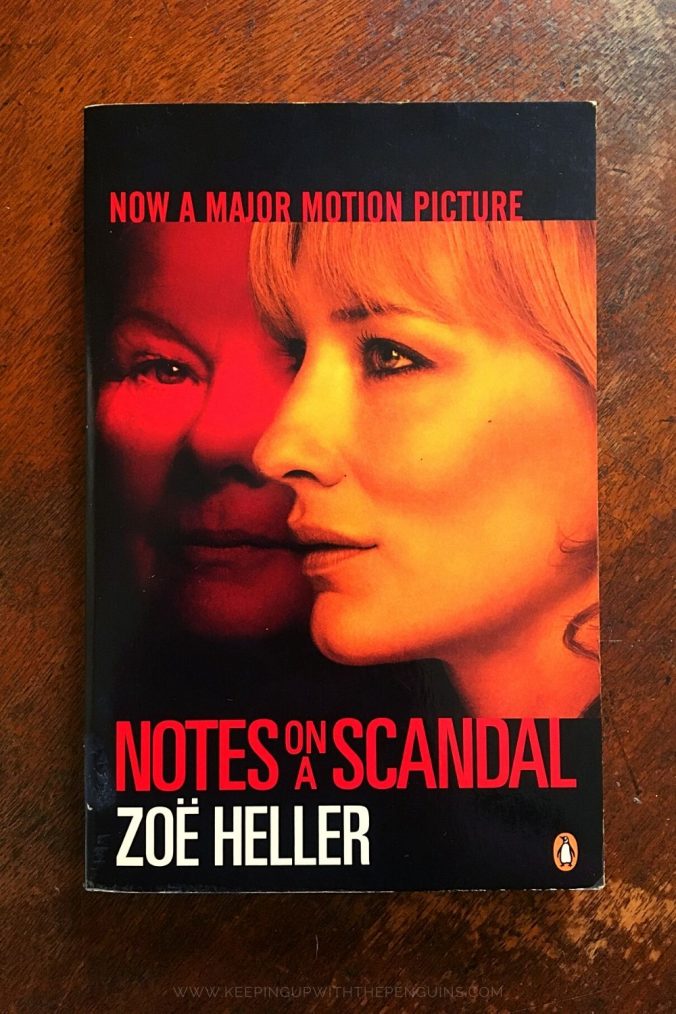 Notes On A Scandal – Zoë Heller

Notes On A Scandal (marketed as What Was She Thinking?: Notes On A Scandal in the U.S., don’t ask me why) is a 2003 novel by English journalist and writer Zoë Heller. I vaguely remember seeing the film adaptation years ago, and being captivated by the performances of both Judi Dench and Cate Blanchett, but really nothing about the plot. So, aside from having some strong visuals for the main characters, I felt like I didn’t know much about this one going in.

Heller has said that Notes On A Scandal was inspired by the real-life case of Mary Kay LeTourneau, an American teacher who had “an affair” (read: plead guilty to two counts of child rape) with a student. So, that should give you an idea of the relevant trigger warnings.

The story is narrated by Barbara, a veteran teacher at a London comprehensive school, and a lonely spinster in her spare time. How to put this delicately… she has trouble making friends. As always, the smallest details make the character, and Heller’s talent for it is gob-smacking.

My name is Barbara Covett. (From time to time one of my colleagues will call me ‘Barb’ or, even less desirably, ‘Babs’, but I discourage it.)

Notes On A Scandal (page 4)

If the Vibes haven’t already tipped you off, you know for sure that something is Not Right with Barbara by Chapter 3. Her story begins with the arrival of Sheba Hart, a new and apparently-naive (though very privileged) art teacher. Barbara intuits that they are potential BFFs, though Sheba barely seems to realise she exists at first.

Slowly, Barbara ingratiates herself into Sheba’s life – first with lunches off campus, then dinners at her home. Unbeknownst to Barbara, however, Sheba is doing some ingratiating of her own, “falling in love” with her 15-year-old student Steven Connolly. It’s the same old story: Sheba feels “unfulfilled” in her perfect upper-middle-class life, Steven is vulnerable and deprived of affection, and before you know it…

Barbara eventually finds out about the “affair” (I really hate to use that term, because it’s not an affair, it’s abuse, but I’m trying to communicate the perspective of the narrative here, so please forgive me). Rather than being, say, appalled, or reporting Sheba to the principal (or the police!), Barbara is deeply wounded and betrayed. How could her BFF have done something so scandalous and not even told her? Because, you see, this is all about Barbara. These are her Notes On A Scandal, after all.

Barbara offers a rather clinical and detached account of the events of the “affair”. The passion in her prose is reserved for her own relationship with Sheba, and her own magnanimity in forgiving Sheba’s treachery. That makes Barbara an unreliable narrator, naturally, but often she reveals more than she really intends to.

The good news is that Sheba is eventually “outed” as a predator. In a jealous fit, Barbara gives another teacher at the school (appropriately named “Bangs”) a very thinly veiled hint about what has been going on, and he goes straight to the principal. Sheba’s life quickly falls apart; she’s fired, she’s confronted by Steven’s mother at her home, her husband kicks her out, and the newspapers have a field day.

All of this is excellent news to Barbara! She finally has Sheba – vulnerable, scared, lonely Sheba – all to herself, and completely reliant on her for support. That’s when, unbeknownst to Sheba, she starts penning her little memoir, her Notes On A Scandal, about the matter.

Notes On A Scandal evoked The Prime Of Miss Jean Brodie for me, with its English school setting, its compact length, and its themes of betrayal and intrigue. For obvious reasons, it also brings to mind Lolita. In fact, imagine that Humbert Humbert was a woman and his story was narrated by his stalker, and you land somewhere pretty close to this one.

It was shortlisted for the Booker Prize in 2003, and The Guardian ranked Notes On A Scandal at number 70 on their 100 Best Books Of The 21st Century. The film version (which I really must watch again, now that I’ve read the novel) was released in 2006, and received four Academy Award nominations. A lot of close-but-no-cigars all around, really.

I don’t see why Notes On A Scandal didn’t make a bigger splash. The subject matter is repellent, of course, but it’s an intense and fascinating read with superbly crafted characters, each and every one of them delightfully hateful. Well paced, cleverly choreographed, guaranteed to stay with you – well done, Heller!

My favourite Amazon reviews of Notes On A Scandal:

Books Made Into Movies, Recommended