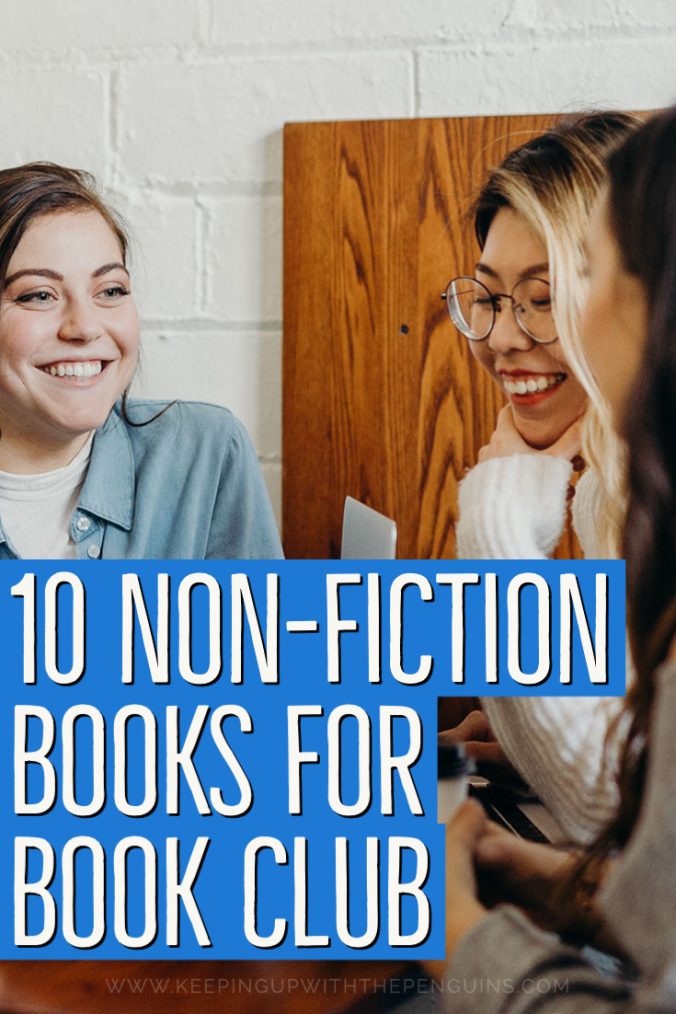 Sometimes, fiction books with lots of exciting plot twists can seem like the best (i.e., easiest) choice for book clubs. Add in a morally-grey character or two, and you’ve got a guaranteed spicy conversation to have over wine and snacks each month. Non-fiction books are less often picked, which is a shame, because they can offer just as much fodder for debate (sometimes more). Memoirs and exposés interrogate real-world issues that can evoke strong opinions; you might find you don’t know your book club pals as well as you thought. Here are ten non-fiction books for book club.

Roxane Gay’s TED talk on what she calls “bad feminism” went viral, for all the right reason. Why do we dance to rap music, even when we worry it makes us “bad feminists”? Why do we like pink? Why do we watch SVU? She addresses all those questions, and more, in Bad Feminist – her collection of essays on all topics, from sex to Scrabble to 50 Shades of Grey. If your book club can get any mileage out of conversations about gender, race, and sexuality (c’mon, which book club can’t?) then this is a great non-fiction pick for you. Read my full review of Bad Feminist here.

When you’re choosing non-fiction books for book club, especially if your book club is usually focused on romances or thrillers, memoirs that have recently been adapted into popular series or films is a good way to ease in. Stephanie Land’s Maid, first published back in 2019, has had a resurgence off the back of the Netflix series of the same name. It’s one mother’s true story of poverty, the class divide, and courage – one endorsed by none other than former President Barack Obama. It courts a little controversy, with questions of privilege and perspective, but that’s just what you need to set the book club conversation to simmer.

Sometimes, the best non-fiction books for book club are the ones that read like the best fiction. Tara Westover was born into a Mormon survivalist family, and had an upbringing completely alien to most of us: no doctors, no school rooms, no government-issued identification. In Educated, with extraordinary skill, she tells the story of how she came from that strange beginning to study at the world’s most lauded academic institutions and attain an education the likes of which most of us would envy. It’s an incredible story of family, faith, and determination, one that’s every bit as compelling as any contemporary literary fiction best-seller. Read my full review of Educated here.

Know My Name by Chanel Miller

You’d be forgiven for not knowing Chanel Miller’s name off the top of your head. She first made international headlines as the pseudonymous Emily Doe, the victim of a violent sexual assault who made a statement that brought tears to the eyes of millions of survivors when it went viral. Her attacker was convicted, but barely punished, and his name has become synonymous with the way that the system fails those who report. But Chanel Miller seeks a different connotation for her own name, and it’s one she lays out in Know My Name: she reclaims her voice, her identity, and uses her story to challenge the way we think about sexual assault and healing from trauma. Her book may be a triggering read for some of your book club pals, but it’s a worthy one. Read my full review of Know My Name here.

If your book club is ready to get meta, Fatal Vision is the non-fiction book for you (and bonus points if you’re all Murderinos). You won’t just be talking about its contents, but how the book came to be written as well. Dr Jeffrey MacDonald was a handsome Princeton-educated physician, who claimed he awoke to find his family murdered, and himself injured, by violent hippie home-invaders in a crime reminiscent of the Sharon Tate murders… only a jury didn’t believe his version of events, and neither did Joe McGinniss. McGinniss gained the now-convicted murderer’s trust and used his inside connections to write the true crime book of a lifetime, one that definitively pointed to MacDonald’s guilt. MacDonald ultimately sued him, it was that bad. So, there’s a lot to unpack here: who’s telling the truth? Who’s (the most) ethically bankrupt? Your book club can decide!

Is your book club ready to get up close and personal with death? Maybe grab an extra couple of bottles of wine when you get together to discuss this one. I Am, I Am, I Am details author Maggie O’Farrell’s close calls. She’s come close to dying, or losing what she lives for, not-once-not-twice-but seventeen times. Each encounter with danger (the childhood illness, the malevolent stranger, the terrifying journey into motherhood) is like a Polaroid from a life, an autobiography told in snapshots of the very worst moments we can imagine. This is a memoir about mortality that will make you grateful for every breath.

There are few places left in the world as mysterious and inaccessible as North Korea. It’s where human rights activist Yeonmi Park was born, and in In Order To Live she offers a unique and terrifying insight into what can happen when the world turns its back. Millions of North Koreans live in desperation and deprivation, in service of a corrupt regime that does not take kindly to criticism or defection. Even those lucky few who manage to escape, as Park and her mother did, might find themselves thrown out of the frying pan and into the proverbial fire. This book will have everyone in your book club wide-eyed and desperate to talk. Read my full review of In Order To Live here.

When a book’s blurb promises to “revolutionise a genre”, as the one for In The Dream House does, you’d be forgiven for rolling your eyes… but this is one of the rare cases where the book’s contents live up to the hype. In a startling twist of storytelling genius, Carmen Maria Machado uses all the genre tricks and tropes we know so well – the haunted house, the bildungsroman, the Choose Your Own Adventure – to tell a story we rarely hear, that of domestic abuse in a queer relationship. This is the most riveting, heart-wrenching non-fiction book your book club will pick up this year. Read my full review of In The Dream House here.

If your book club wants to round things out on a lighter note, you can’t go past Me Talk Pretty One Day. David Sedaris is that wicked friend who makes fun of everyone – including himself – so deliciously that you can’t help but giggle along with him. In this loose memoir, he recalls anecdotes from his childhood, and marries them up to his experience of moving to France and his failed attempts to “integrate” as an American abroad. Make sure you have a pile of Post-it notes handy when you’re reading, because everyone will come to book club with their favourite passages flagged to read aloud (if they can talk for laughing). Read my full review of Me Talk Pretty One Day here.